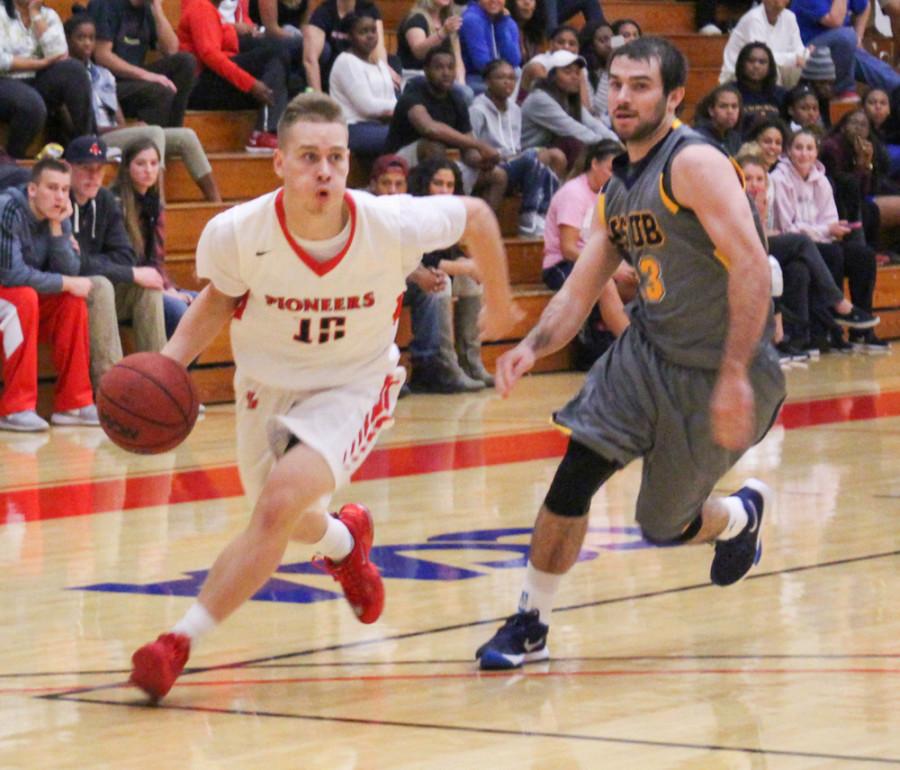 East Bay basketball madness is here and started on Nov. 13 with the conference challenge in Pioneer Gymnasium. Both teams hope to start the season strong. The men look to make their first playoff berth since joining NCAA Division II and the California Collegiate Athletic Association in 2009-2010; the women hope to make it back to where they ended last year, the CCAA conference championship.

The men ended the 2014-2015 season with a 6-22 overall record and 4-18 in conference play and finished 11th in the 12 team CCAA conference. One of the largest issues the men suffered was a short roster, since at one point of the season they only had 8-9 players to rotate, compared to 12 normally. This season bench players will be one thing the team will not lack.

The team struggled last year primarily because they lacked depth and scoring. Seniors Tre Mauldin and Jack Pasquini provide experience for the squad and Carmon explained that depth wouldn’t be a problem this year.

“We got a couple guys that could really go,” Carmon said. “They can put the ball on the ground, knock down shots, and create for themselves.” Something that this team desperately needed.

Carmon has high hopes for his team this season, and he can feel it out on the practice floor. “We’re trying our best to really not give up any easy opportunities,” he said. “Coach really emphasizes defense and I couldn’t respect that more. I honestly have wanted to become a better defender myself.”

The team is also looking to score a lot more easily. They want to work for easy shots, and look to make that extra pass, “something like the Spurs offense,” Carmon said with a smile on his face. “You get an open shot but pass it over for a better shot.” That’s what they want to do, they want to be opportune, take advantage and be prepared.

However, for the women, their 2014-2015 season was a different story. This team finished with a regular season record of 20-11 overall and 13-9 in the CCAA, which earned them the 6th and final seed to make it to the CCAA playoffs last year.

In the playoffs, the women came up with two tough wins against third ranked Cal Poly Pomona, 75-70 and second ranked Humboldt State, 73-67, sending them into the finals. They then met number one seeded Cal State Dominguez Hills in the conference championship game but came up short with a heartbreaking loss, 57-76.

While they made it within one game of conquering their conference, the women look to use this experience as motivation to propel them even further this year, according to senior point guard Lacie Effenbeger and junior center Remy Puou.

“We have higher expectations for ourselves this season with knowing that we can get that far,” Effenberger said. “We work well as a team and it’s exciting.”

Puou made it clear that their expectations are through the roof this season for the Pioneers.

“Our goal is to obviously get a banner, make it as far as we can and like Lacie said, we have good chemistry and a lot of great players that have come in and are returners,” Puou said.

Last year the team had a steady flow of offense from senior shooting guard Stephanie Lopez. Lopez was second in the CCAA conference in points per game with an 18.4 average. Puou explained that they will miss her, but they look to fill that gap with multiple player contributions.

“Last year Stephanie Lopez was our main scorer, so now it’s going to be more of a team sport,” Puou said. “Everyone is going to have to score and contribute offensively and defensively.”

Effenberger agreed with her teammate, stating, “It’s going to take a lot of the little things too. With the bench and even the people coming off the bench, we’re going to have to play deep and be a collective unit in order to get to where we want to get.”

Effenberger’s last words describing her and the team’s hopes for this season: “Now that we know what it feels like to make it to the playoffs and to the championship round, we want that feeling again, and we want to get just as far and get even further.”