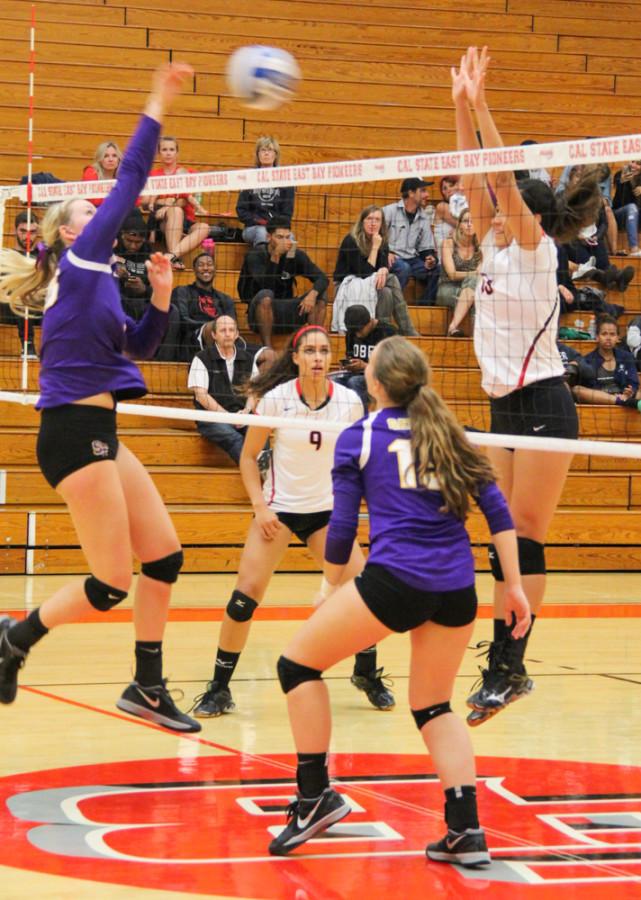 Despite keeping the score close in every set against San Francisco State, the Cal State East Bay women’s volleyball team couldn’t pull out a home victory.

The Gators took over sole possession of fourth place in the California Collegiate Athletic Conference when they defeated the Pioneers in Hayward on Tuesday night. SFSU is now 7-8 overall and 5-3 in conference play while the Pioneers fell to 3-13 overall and just 1-7 in CCAA competition.

A pair of upperclassmen, senior Jaclyn Clark and junior Taylor Brownlee, led the way for the Gators. The two combined for 27 of SFSU’s 41 kills and dominated the ball, as they were responsible for 76 of their team’s 119 total attacks on the night.

“The conference is tough all the way through,” SFSU Head Coach Jill Muhe said. “A three set win on the road is huge. Everybody has picked up their play lately.”

CSUEB sophomore outside hitter, Kiani Rayford led the team in kills with 7 and senior defensive specialist Angie Maina continued her impressive season with a game-high 25 digs. The senior ranks first in the conference in digs with 365 and digs per set with 5.70. Maina credits her success to the Pioneers coaching staff and their emphasis on using the proper techniques for her position especially “staying low and keeping your platform forward.”

East Bay found themselves down 17-4 in the first set before they were able to put a run together. Sophomore Brandi Brucato was crucial in the momentum shift as the Pioneers rattled off five unanswered points. SFSU began to pull away again but CSUEB managed to battle back and trailed 23-20 after a defensive stop by Rayford and freshman Kathy McKiernan. However, the Gators took the next two points to stop the rally and take the first set 25-20.

The Pioneers were able to carry their momentum over into the second set where it was back and forth until midway through the set. McKiernan killed an assist from sophomore Veronica Fabiano that tied the set at 13-13. SFSU scored the next three points in a row to make the score 17-13 and never trailed again in the set.

CSUEB mounted a minor comeback and were within two points with the score 19-17 following a block by freshman Deja Thompson and sophomore Michaela Gardner. However, the Gators offense proved to be too much and they went up 2-0 in the match after closing out the second set 25-18.

“Keep going,” SFSU sophomore Christine Johnson told her teammates during a timeout in the third set. “Stay up, keep going.”

The Gators did exactly that in the third set. Despite trailing in the third set 11-5, SFSU kept going and eventually tied the set at 13-13 following an attack error by McKiernan. The Gators fast pace and offensive onslaught took over at the end and they closed out the Pioneers 25-16 in the set for a 3-0 win.