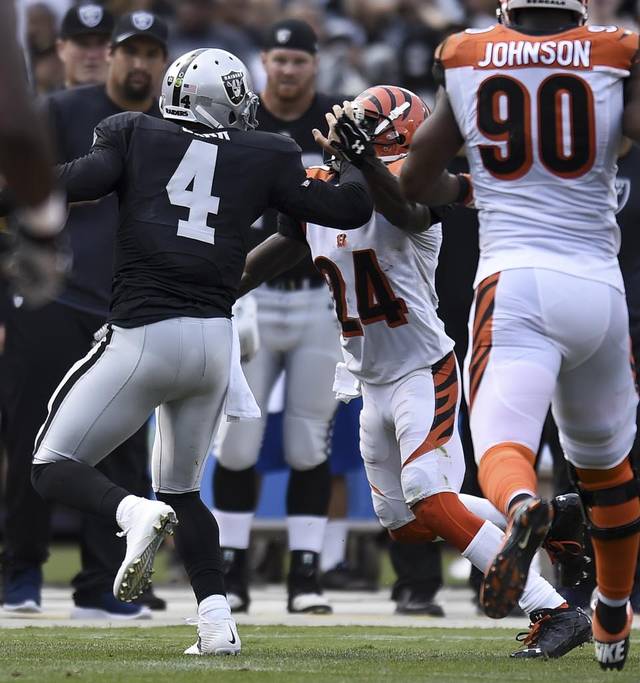 During the entire 2015 NFL off season there has been a sense of hope and optimism surrounding the Oakland Raiders.

Those feelings took a serious hit on Sunday when the silver and black were pummeled in their home opener against the Cincinnati Bengals 33-13. The Raiders were down 24-0 at halftime and didn’t score until midway through the fourth quarter.

Oakland’s starting quarterback and second year standout Derek Carr injured his hand early in the second quarter and backup Matt McGloin played the rest of the game. Team officials said Carr could possibly play in the Sunday match up against the Baltimore Ravens at 1:05 p.m. in Oakland. The Raiders also lost both of their starting safeties to injuries in Nate Allen and Charles Woodson.

“I thought our fans were excited about the opening of the season, as we were,” Raiders first year Head Coach and Hayward native Jack Del Rio said. “That’s a very disappointing embarrassing effort. I take full responsibility, we’ll get it turned around and corrected.”

Carr completed 7 of 12 passes for 61 yards before McGloin came in for the hurt starter. McGloin finished the game with 142 yards passing and 2 touchdowns that came late in the game. First round draft pick from Alabama Amari Cooper caught 5 passes for 47 yards in his NFL debut.

Cooper was involved in one of the most talked about plays of the weekend when Bengals defensive back Adam Jones took Cooper to the ground took his helmet off and slammed his head into it. Jones has been fined $35,000 by the NFL but did not receive a suspension.

The Bengals were firing on all cylinders and quarterback Andy Dalton finished the game with 269 yards passing and 2 touchdowns. “We really could have done a lot more, there were plays to be made,” Dalton said.

Third-year tight end Tyler Eifert was the recipient of much of Dalton’s throws as he racked up 9 catches for 104 yards and both scores through the air. Second-year running back Jeremy Hill punched in 2 touchdowns on the ground in the win for Cincinnati.

“Pleased with the victory,” Bengals Head Coach Marvin Lewis said. “Obviously we have a lot of work to do and I thought we left a lot out there offensively.”