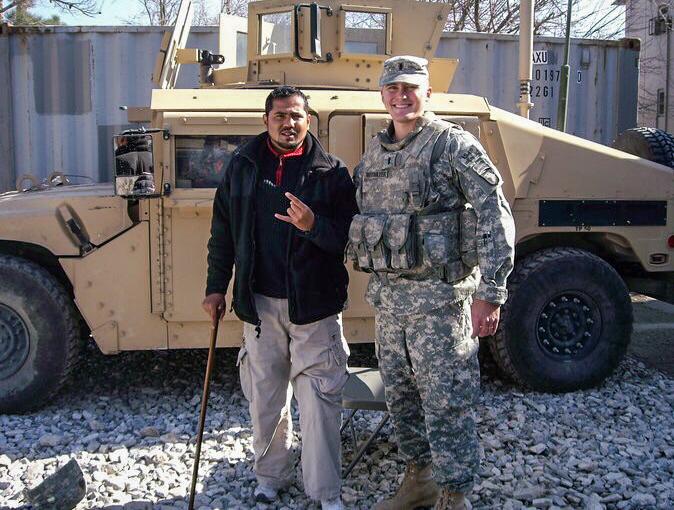 Paul Nawrath sat on the edge of his bed in his recently settled second-story room. The room was mostly vacant except for some clothes strewn across the floor as light peered through the window overlooking the San Ramon suburb. The 26-year-old held his light-brown acoustic guitar strumming the chords to Justin Moore’s “Outlaws Like Me,” as he began to sing. He plays many instruments including the piano, bass guitar, drums and harmonica.

Since Nawrath returned home from Marine Corps duty in 2011, he’s struggled with post-traumatic stress disorder. He deployed twice during his four-year service; once to Iraq and once to Afghanistan. His mind was restless. This made tasks like driving, or, going to the mall unbearable. His adrenaline required constant activity like rock climbing. He found that playing music relaxed his mind.

“If I didn’t feed the adrenaline, I wouldn’t have peace,” Nawrath said. “I had to constantly play music to have peace.”

Like Nawrath, many veterans returned home after the wars in Iraq and Afghanistan downsized. More than 52,000 American soldiers were wounded in these countries. Fifteen percent suffered a traumatic brain injury and 1,550 endured limb amputations. For many, the transition back to civilian life is nerve-racking.

In April, Nawrath found Mike Conklin, the president of the Sentinels of Freedom Scholarship Foundation. The San Ramon based nonprofit helps severely wounded veterans become productive members of their communities. The foundation helped Nawrath define his educational goals and awarded him a partial scholarship. He will attend classes as part of a Lawrence Livermore Labs program the summer.

“When I met Mike, I kind of hit rock bottom,” Nawrath said. “I got laid off from my job, my buddy blew up my truck and my parents kicked me out of the house. All of my PTSD symptoms came back. I was dealing with a pretty hard time when I first started talking to him.”

Conklin, a Danville resident, founded the program in 2003. It started as a community-based organization and has since expanded nationwide. The program receives its money through charitable donations, corporate and foundation grants and fundraising.

In July, the Sentinels of Freedom will honor their 100th graduate. There are about 90 active sentinels in the program with plans for 100 active sentinels by 2016. Conklin views the foundation not as a charity, but as an investment.

“It’s probably one of the most, high touch, personal scholarships in the nation,” Conklin said. “Because it’s not just send them a check and say, ‘Have a nice day.’ We expect results.”
It’s not a handout. Veterans must meet strict criteria to become a sentinel. The foundation seeks veterans with a 60 percent permanent disability rating with injuries resulting from military sanctioned activity. Depending on the individual, some veterans who fall below this rating receive help.

There is a thorough vetting process for sentinels. Their financial and educational goals are assessed. Once in, each sentinel is assigned a mentor. They must prove themselves at a junior college before being accepted into a university. Their grades are checked every six months. The foundation checks on each sentinel routinely to see how they are doing.

“We travel the military hospitals, that’s where we meet a lot of them,” Conklin said. “We interview them, and sometimes we’ll have a kid who’s in the hospital for four years, before he gets out. But he knows from the time we accept him that we’re not going to drop him.”

Conklin met Ritchie Mushfiq, 34, an East Bay Afghan in 2013. Five years ago, Mushfiq was an interpreter for U.S. Forces in Afghanistan. During a humanitarian aid mission, his unit was ambushed and a roadside bomb struck his truck. Mushfiq lost both legs and suffered back injuries and shrapnel wounds. His injuries left him unconscious.

“Some other obstacles and challenges started right when I came back home,” Mushfiq said. “The bad guys were hunting for me. They tried to catch me and kill me. I was in hiding for several years after my injuries.”

Mushfiq eventually reported back to his former U.S. military unit in Afghanistan and asked to stay on base. He wasn’t physically fit to be an interpreter due to his injuries. They allowed him to live on base for nearly 11 months without working.

“They were so supportive of me,” Mushfiq said. “They treated me like my real family. I am so thankful for every single person in my team. They let me stay to be safe. They helped me apply for a United States visa.”

Mushfiq and his wife moved to the U.S. in 2011 and now have two daughters. He remains close with his old military team and they continue to support him. Mushfiq feels secure in the United States, but is sad that he can’t visit family in Afghanistan.

The Veterans Affairs denied Mushfiq’s request for medical benefits. They considered him a veteran, but wouldn’t provide him benefits due to his non-citizenship. The Sentinels of Freedom accepted Mushfiq and awarded him a full scholarship. He is now working toward a degree in business.

“Mike Conklin did a wonderful job for me,” Mushfiq said. “He accepted me with love and support. I received a lot of inspiration from his team and his office.”
The VA is the primary caretaker for American veterans. Due to a backlog of disability claims, veterans are often left waiting. Costsofwar.org reported 970,000 total registered disability claims by soldiers from Iraq and Afghanistan.

The Sentinels of Freedom leverage each veteran’s VA compensation. They designate $50,000 over a four-year span to finance gaps leftover from GI Bill and vocational rehab benefits. According to Conklin, there are always gaps. Some veterans come the foundation with terrible financial problems.

The Conklin family lineage has a rich military presence dating back to the Revolutionary War. His father served in the Office of Strategic Services during World War II and his two brothers served in Vietnam. Upon graduating high school, the Vietnam War downsized and the military conducted lottery style drafts. Mike went to college and made a career in real estate. All three of his sons became U.S. Army Rangers.

Conklin’s involvement in veterans started in 1997 when he hosted banquets to honor local recruits. A school’s failure to acknowledge military recruits during a graduation ceremony prompted him to take action. Military officers, city and school officials and other community members attended the banquets.

“Our message to them was, ‘we know who you are. We’re proud of you. We recognize your commitment, that you’re making,’” Conklin said. “We want you to know that when you come back in four years, or twenty years, to our community, you come see us. We’ll help you get a job. We’ll help you get into school.”

Seeing the Twin Towers fall, Conklin knew war was imminent. By then, two of his sons were Army Rangers. He believed the community needed to help injured veterans returning home. He gathered the community’s leading businessmen for a meeting and recalled the story of a young Vietnam veteran from Danville that had both legs blown off in the war. Nobody reached out to help him and he later died of alcoholism.

“We have a responsibility,” Conklin said to everyone in the room. “They serve our nation. They leave from our communities. They come home. We can do more than just say, ‘Thank you for your service.’ It’s the VA’s job.”

Conklin laid out his plan to help returning wounded veterans and asked for their help. The group agreed. The first Sentinel came home in 2002. Jake Brown was nearly crushed to death when his Humvee collided with an Abrams tank during a nighttime training mission in Germany. The Sentinel model was built around Brown. Conklin has been working full-time for the foundation ever since.

Mike Conklin has witnessed the tragedies of war. In 2003, he visited his wounded son Chris at Walter Reed Army Medical Center. Chris’s Humvee was blown up while under attack in an area outside of Tikrit, Iraq. The number of casualties Conklin saw at Walter Reed confirmed his belief in the Sentinels of Freedom. He knew that many of the veterans he saw had nothing to come home to.

“I don’t really care for the advertisements that show the tragedy of the results of war,” Conklin said. “I want to talk about the potential. I get the tragedy. I get the commitment. I get all that. I know these guys aren’t going to be totally fixed. But they have potential. And those are the guys that I want to invest in.”

Conklin believes they won’t run out of clients. Besides combat, they assist veterans that are hurt in training. Their goal is for 100 veterans in and 100 graduates out per year. And when the next war comes, they’ll be ready.