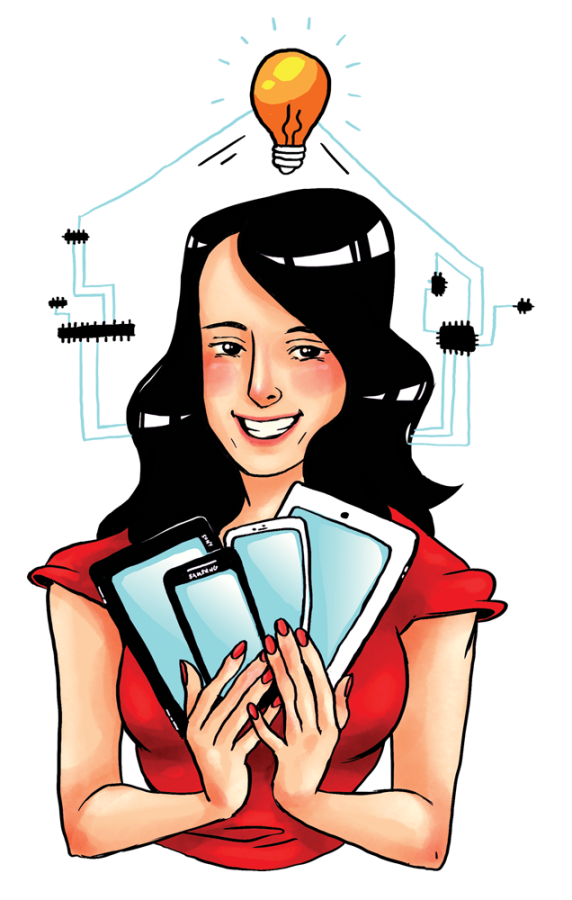 Cal State East Bay alumna Natali Morris has lived a life filled with gadgets and gizmos through her career as a tech journalist. Morris, formerly Del Conte, has had her foot in the tech world for years and has worked for a variety of media outlets some including CNET TV, CBS News, MSNBC, the BBC, the CW, WIRED, Oakland Tribune and more, where she utilized skills acquired during her time at CSUEB. As a tech journalist Morris specializes in consumer technology opposed to enterprise technology. She reports on what the average consumer would use, buy or interact with.

For Morris, being brought up in the Bay Area included spending time at the beach, traveling to wineries, camping and trips to Santa Cruz. “I think I took advantage of everything the Bay Area had to offer,” said Morris. Away from the Bay Area for seven years and now living on the East Coast, Morris misses her city by the bay and expressed that she’s always happy to see her hometown when flying into San Francisco.

Currently a freelance journalist at NBC and a full time mommy of two, Morris’ workload varies depending on assignments she pitches to the network. “My parents used to drill into us that you get out of something what you put into it,” said Morris. “Freelancing is such a quintessential example of that. If I want to work, I have to hustle for assignments. If I don’t want to work, I am a busy mommy and some weeks that is more than enough.”

Other days, Morris will get an assignment from a producer or editor with one or two days to research, conduct interviews and get ready to go on air. “I love that part,” she exclaims. Morris says she learned to “organize information and synthesize it in an organized way” during her time at Mission San Jose High School in Fremont.

Morris stores and archives information from interviews, which is especially useful if anything she writes, is contested or challenged. “If someone denies having said something that they were quoted saying, I can refer to the transcripts of our interviews verbatim,” she explained. Interview transcripts, links to research, and assignments from editors are all kept in one place. She even writes her stories in the same notebook. “I like having it all in one place, even the finished piece,” said Morris.

Raised as a Jehovah’s Witness Morris was not allowed to move away for college and had to decide between San Jose State and Cal State East Bay. “I think the difference between going to a commuter school and going to a fancier university is that everyone there is elective,” Morris said. “They are working or they are working to put themselves through their education. They’re more invested in their education. It’s harder for them than someone whose parents paid their own way. Because of that I felt like everyone cared a lot.”

Morris studied in the Mass Communication department and graduated in 2000 with a Bachelor’s Degree in Journalism. Like most who graduated from CSUEB prior to the university name change, Morris still recognized her alma mater by the original name. “I still can’t really identify with Cal State East Bay just because my degree says Hayward and my father’s degree says Hayward,” she said.

Morris noticed the difference between commuter colleges and what she referred to as fancier colleges when she attended the University of Southern California where she received her graduate degree in Sociology with an emphasis in Mass Media. “I can see the difference between people who are just sent on someone else’s dime and people who are going there of their own grit and bootstrap and I really loved that about my university,” she said in regards to her time at CSUEB.

There’s a constant debate regarding whether college degrees are needed for a successful life. While Morris isn’t sure if a degree is necessary, if she could go back in time she would make changes to how she learned.

As a journalist, Morris has noticed a change in the industry from when she first began her career over ten years ago. “We have to now be authentic in a way that was never accepted before,” she continued. “I’m interested to see how that continues to evolve because like I said there’s so much noise with technology being so pervasive that people can just tune out whoever they don’t want to talk to or whoever they don’t want to listen to.”

As she reflects on her career, she attributes her success to the ability and bravery of saying yes.  “I tell people just be flexible and be willing to say yes until it doesn’t work for you and then you try something else. But if I hadn’t been either brave or stupid, I wouldn’t have tried to make a transition from either a writer to a broadcaster,” said Morris. “I was so grateful that I said yes more often than I said no. I’m just so proud of myself for having the
guts to do it.”