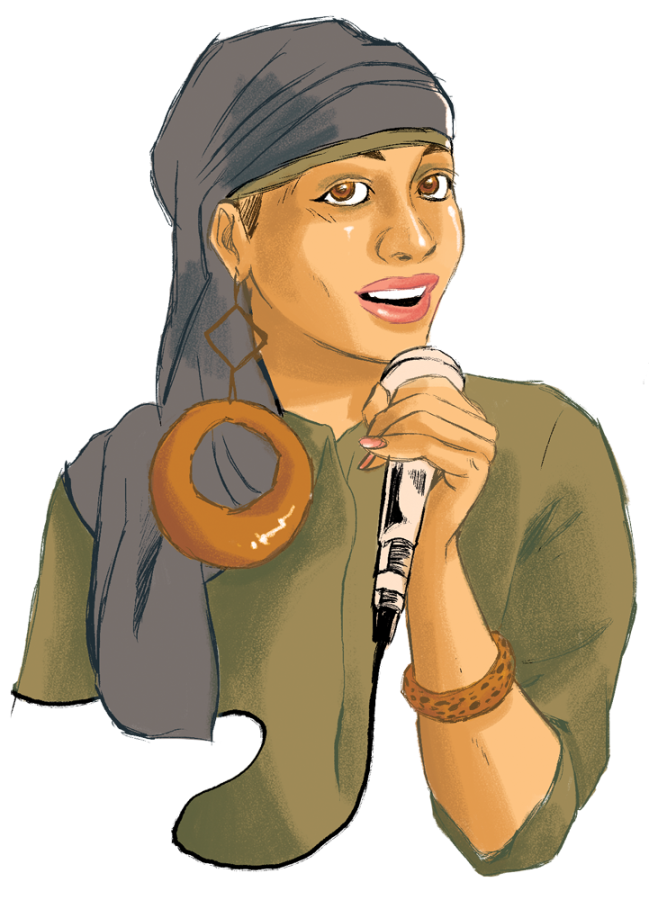 The East Bay is buzzing, or better yet bumping to the rhythm and rhyme of Muslim hip-hop artist and activist Alia Sharrief.

With uplifting rhymes, Sharrief’s lyrics offer a peek into life as she sees it through what she calls a “creative lens”.

Born in Sacramento, Sharrief knew she wanted to pursue music at an early age, naming herself Homie C at the age of four. “I had a great childhood. My sisters and I would always perform for the family,” said Sharrief.

Sharrief graduated from California State University, East Bay in 2014 with a Bachelor’s Degree in Communication with an emphasis in Broadcast Media. “Classes all day. I would wake up, pray, go to all four to five classes, then go to work,” said Sharrief describing a typical CSUEB day. “I always had a checklist of what I needed to accomplish each quarter and really focused on ways to stay motivated.”

Taking 16 units per quarter, Sharrief was able to graduate quickly which allowed room to shift focus to her music. “I have more time to be an artist now that I graduated,” said Sharrief.

“We’re gonna show you, how they rewrote history. Willie Lynch letter, it ain’t no mystery. They stole it from us all and now they gotta free em’ all cuz we’re Black heroes baby,” rapped Sharrief in the music video. “… each song I write has its own story and emotional attachment behind it,” said Sharrief.

Among several new projects including her new album “Back On My Deen” and documentary, “Heal Lanka” about her husband, Ras Ceylon and his journey in Sri Lanka, Sharrief is also founder and creator of The Hijabi Chronicles, a collective that focuses on Muslim artists and liked-minded individuals who want to raise awareness as well as empower and educate communities, explained Sharrief.

The Hijabi Chronicles held its first event earlier last month at La Pena Cultural Center in Berkeley. “I am trying to convey that Muslim women belong in hip-hop. Though it is a male dominated arena, we definitely are here,” explained Sharrief in a YouTube interview with AJ+. “We are knowledgeable. We have rhymes. We have soul. And we have something to say.”

The idea of Muslim women in hip-hop has received media attention from a variety of outlets including The Huffington Post. When asked how she feels about this notoriety Sharrief responds, “It’s a trip, especially because it’s just who I am.”

Being Muslim, her Islamic faith plays a strong role in her identity not only as a woman, but also as an artist. “Islam keeps me spiritually guided and grounded she continues.
I am not preachy in my music but I am always for good over evil, right over wrong, knowledge over ignorance.”

Her music carries a 90s hip-hop vibe. Conscious lyrics ride the beat just enough to give a groove but not too much to where the message of the song slips through the cracks of the track. “Shots fired we ain’t dealing with no liars selling us imaginary dreams that we ain’t buying.

Tearing down the industry and they call it a riot cuz we ain’t being silent no we ain’t keeping quiet,” raps Sharrief in her most recent single “Who Ready” inspired by civil rights revolutionary and Muslim El Hajj Malik Shabazz remembered in history as Malcolm X.

Excited about the strides hip-hop is making and the new wave of youth hip-hop artists, Sharrief comments on the downside of today’s hip-hop scene, “Hip-hop has been appropriated and not everyone pays the proper homage to the legends that came before us or before this ‘rap’ game emerged.”

Artists are fueled by inspiration. For Sharrief, thinking of every project as it possibly being her last, inspires her to make sure she puts out her best material. “…you only die once, and while I’m here living, I have to give it my all and touch people with my music and message,” said Sharrief.

The Berkeley Marina provides a cool space for Sharrief to write, “I love wherever the water flows,” said Sharrief. “My grandmother always told me to use my pen and my words to defend myself. She referred to it as ‘pencil whipping’.”

As a former CSUEB student, Sharrief offers advice to the students planning to graduate in June as well as those still enrolled. “Keep focused on your goals and make sure you keep track of what you want to do with your life,” she concludes “Every course you take should be seen as a building block of your career. College is a marathon, and you should sprint but take your time figuring out your craft. At the end of it all, graduation should be the goal!”