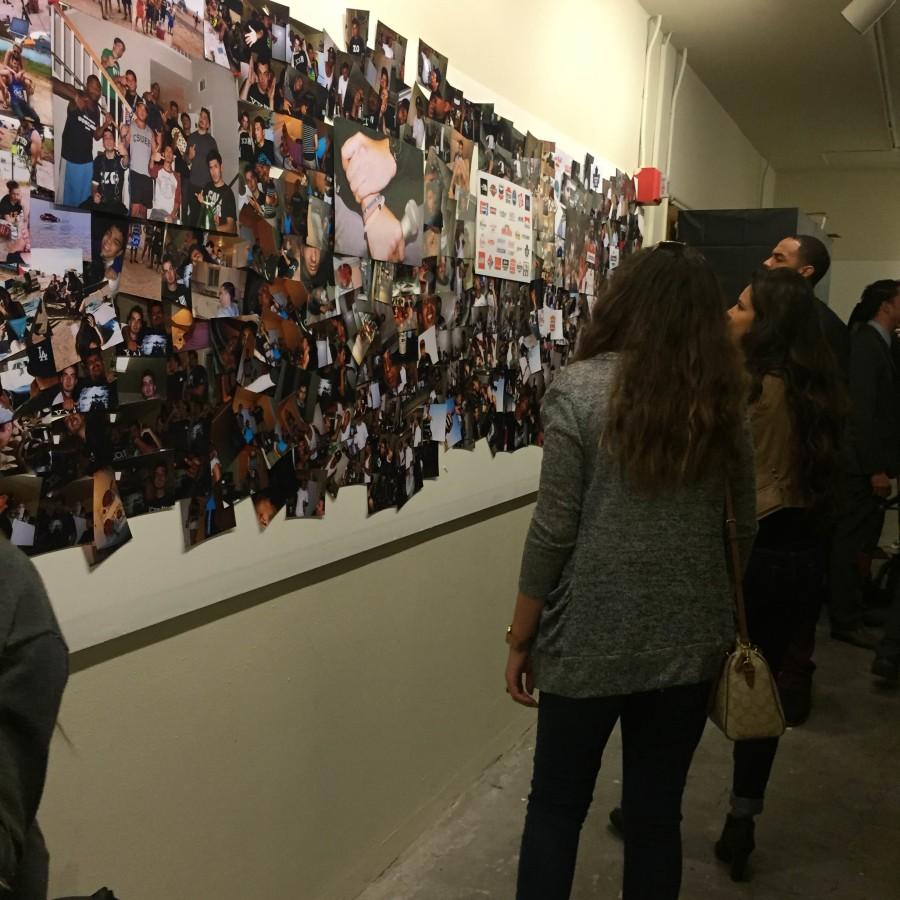 Some 3500 pictures spread across the walls of Cal State East Bay’s Old Kiln Room Gallery to celebrate the college experience of a recent group of alumni in what is believed to be the first CSUEB reunion of its kind.

Chase Mee, who graduated in 2014 with a degree in Graphic Design, and Business Advertising, shared highlights of his and his friends’ campus life through a collage of photographs dating back four years.

“It’s kinda like going through a time lapse of my life…. People fade in and out, but the love is always still there,” Mee said.

The art show was presented in a dark gallery with minimal lighting on the pictures and posters. Local rapper, DTMWIN, played music throughout the room. Mee said he spent more than 30 hours pasting the photographs on boards with the permission of the Media Studies department.

The gallery is usually used for exhibits presented by Fine Art majors. This is the first time a graphic design alum has requested to use it in this fashion. It is also the first time anyone can recall of a similar exhibit on this campus.

The small show space quickly reached capacity with over 60 people in attendance including friends, alumni, students, and staff.  Throughout the night visitors looked around the gallery, reminisced, socialized as they ate gourmet dollar tacos made by Mee’s friends.

There were pictures of Venice beach camping adventures,  hanging out with his friends at different locations; Mee’s  and his friends’ journey at  East Bay began in 2010 eventually heading towards graduation in 2014. There were  also recent photographs with friends on campus this year when they occasionally visit.

This outlook on keeping friends and not losing any is what gave him the idea to jump start his brand, The Degenerates.

“It just brings back memories that you didn’t even think about before,” Dominic Skipper, an Alum who  attended said.

Mee kept exact details of the show secret in order to surprise his friends but spread the word about the venue through social media. He used the logo “The Degenerates” — an enterprise he and his colleagues spearheaded to brand and sell T-shirts, posters, photographs. He remains the sole proprietor.

During the middle of the show, Bay Area rapper, Roger Rojas aka DTMWIN, performed seven songs off his album  and one encore with a close friend.

“He (Mee) had asked me to perform, for tonight and I was really juiced because he wanted my first performance to be at his art show,” Rojas said.

“Overall the event is modern, hip, something I would go to.. like something a college student would want to go to.. the art show of our era,” said CSUEB senior Tourie Boswell about the atmosphere of the show.

By the end of the four-hour show held on April 3, Mee’s guests and friends presented him with a t-shirt on which they all signed their names to thank him for the evening, and some left with T-shirts that they bought from him.

“I raised $1400 and went out and bought my mom a 50 inch TV,” Mee said. The reunion was not intended to raise funds, he said but it was a fun way to gather everyone in one place. The money was a bonus.