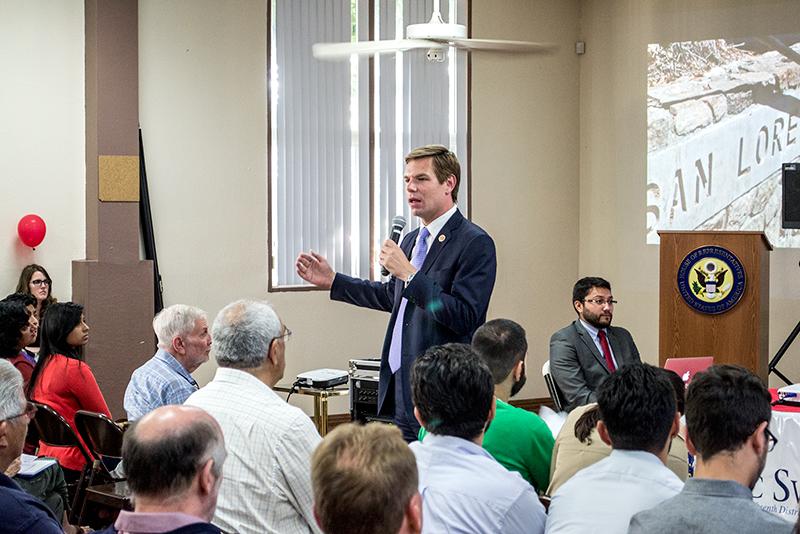 The ongoing conflict between Israel and Palestine buffeted various public venues in the Bay Area last week including a protest at the Port of Oakland and vocal opponents of continued U.S. monetary support at a local town hall.

The Port of Oakland continues to be a scene of protesters attempting to make it impossible for an Israeli owned ship to berth and unload its cargo.

Last Thursday, a large group of community members attended a question and answer town hall meeting given by Congressman Eric Swalwell, California’s representative of the 15th district in the U.S. Congress, at the San Lorenzo Village Homeowners Association’s multi-purpose room.

Swalwell began the evening with what he has achieved within the partisan congressional atmosphere, including the securing of funds for strengthening the transbay BART tube and joining the freshman bipartisan caucus that seeks to find common ground between cooperative Democrats and Republicans.

Swalwell cited the Gaza conflict, the Russian encroachment on Ukraine, ongoing religious strife in Iraq and social unrest in Ferguson, Missouri, among others, as possible discussion topics. But a majority of questions came from community members centered on the congressman’s congressional support for military aid to Israel.

Saba Maher, a law student in the Bay Area, argued with Swalwell about disproportionate aid given to Israel. You, “slap [Israel] on the hand, on one side, but then you give them handouts on the other, to continue the military aggression.” Maher went on, “You say Hamas is a terrorist organization…But congressman, I am here to tell you, that it is Israel’s policies, and it’s the U.S. blanket support for Israel, that is creating Hamas’ aggression.”

Swalwell told citizens that funds for Israel go towards ‘Iron Dome,’ referring to a rocket intercepting missile system that seeks to intercept rockets before they land in Israel. Swalwell also stressed the importance of the Palestinian people to be able to be a part of the world community and have economic opportunities as well as self-determination.

“I have voted for, and I have supported, aid to Israel. I have also supported aid to the Palestinian people… I just want peace in the area,” Swalwell stated during the opening of the questioning period.

“I was a teacher in the U.S., and was part of a group that went to Ramallah, Palestine and taught. I share with you that I was detained for nine hours by the IDF. I was questioned. I had guns pointed at me. I was humiliated. You continue to support them and continue to vote for them,” said Omar Aziz, who identified himself as a member of Teach for America. Aziz was another member of a sizable portion of the crowd who were unafraid to show their disapproval.

A speaker, Layma Ahmadzai, voiced her concern by referencing an update Swalwell posted on his Facebook timeline. Swalwell who is known to be exceptionally active on social media updated his profile July 11, 2014, which read:

“Innocent civilians in Israel have been under constant attack from rocket attacks from Hamas-controlled Gaza. These attacks have recently escalated, with over 500 rockets fired at Israel in just the past month. I stand with Israel as it seeks peace and security in the region.” A photo with an Israeli flag and the caption, “I stand with Israel” also is included in the Facebook update.

Ahmadzai, from Fremont, went on to describe disproportionate casualties on the Palestinian side of the conflict. “Your morality reflects mine…How do you present such a one-sided opinion on your Facebook? I am completely offended, insulted, and disturbed.”

Swalwell expressed that he had created another post the following day that decried the killing of any innocent civilian.

With a large Middle Eastern population in the East Bay, individuals are making their voices heard in more ways than one.

The author of this article has previously interned for Swalwell as a student of CSUEB’s political science department. 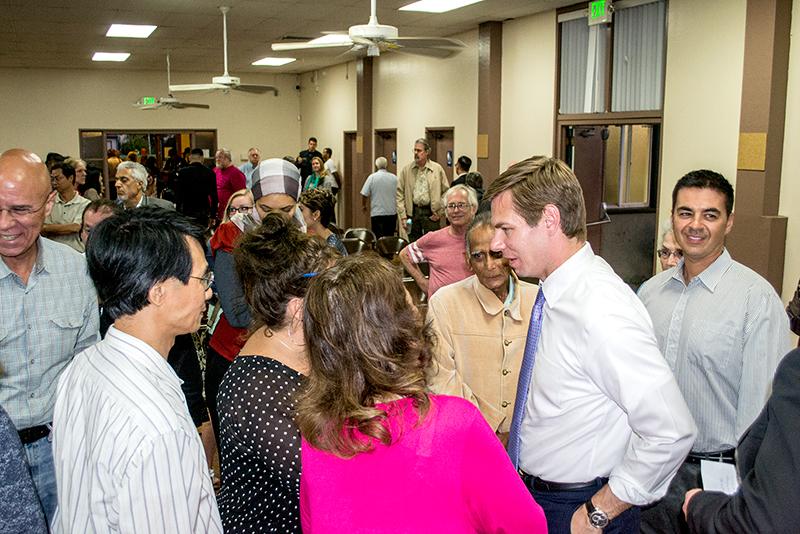