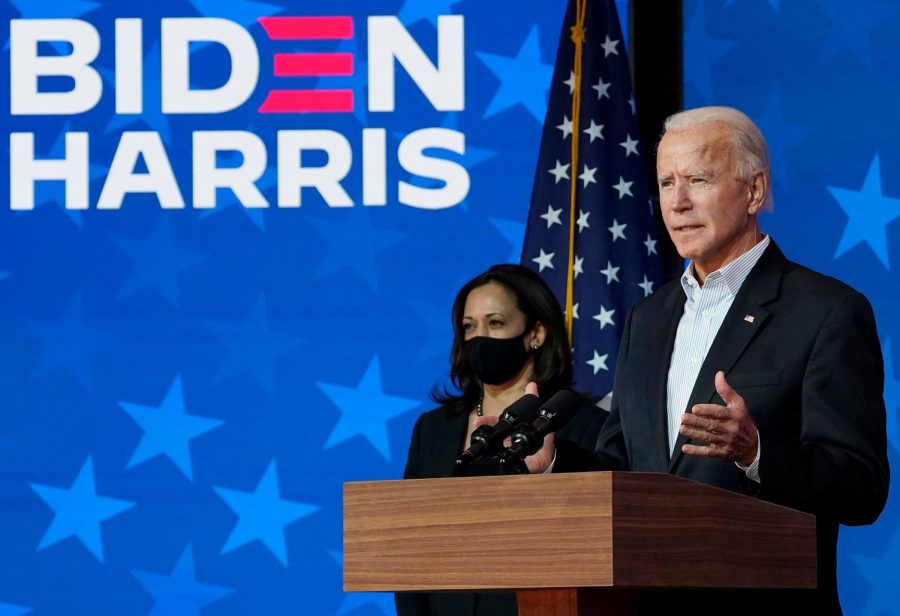 By Scarlet Schwenk, POLITICAL EDITOR
On Wednesday January 20, President Joe Biden was sworn into office as the forty-sixth President of the United States, alongside Madam Vice President Kamala Harris, the first woman and woman of color elected as Vice President.
Outgoing president Donald Trump did not attend the inauguration, the first outgoing president to not attend in over 150 years, though Vice President Mike Pence did.
In his first day in office, Biden is reversing more than a dozen executive orders set forth by Trump; including: rejoining the Paris Climate Accord, issuing a mask mandate on Federal Property, stopping the installment of the Keystone XL Pipeline, and revising immigration policies, such as ending the Muslim travel ban. Biden plans to announce more executive orders throughout his first one hundred days in office.
The Inauguration ceremony featured an array of speakers including writer, and Harvard graduate, Amanda Gorman. Gorman offered hope to the future of America in her poem “The Hill We Climb” writing “we will never again sew division” creating a sense of unity in times of calamity.
“This is America’s Day… A day of History and Hope… we come together as one nation under God.” Biden said, continuing on with the message of unity in his speech.
Acknowledging the work ahead of his administration, Biden expressed sentiment to heal the nation of both a pandemic and polarization of Americans. Throughout the remainder of the speech, Biden urged on with hope and encouraged a bipartisan effort to serve the nation, not their party.
A sense of unity continued on throughout the processions as Senator Mitch McConell and House Representative Kevin McCarthy rose above partisanship, graciously welcoming the new administration.
The inauguration created global harmony, with over thirty world leaders expressing their congratulations and excitement to work alongside a welcoming administration. Italian Prime Minister Gisueppe Conte conveyed enthusiasm to collaborate in solving international issues, along with commemorating Biden’s inauguration as a “great day for democracy, reaching far beyond” American borders.
Madame Vice President spent the day swearing in three freshman Democratic senators: Jon Ossoff of Georgia, Reverend Raphael Warnock of Georgia, and Alex Padilla of California, giving Democrats the majority in the Senate. Jon Ossoff and Rev. Warnock are the first Jewish and the first Black senators representing Georgia, respectively. These new officials continue the trend of historical premiers of diversity within in American Government. Democratic Senator Chuck Schumer of New York took over as majority leader in the Senate. Finally, the Democratic controlled Senate then confirmed Avril Haines as the first female Director of National Intelligence with an overwhelming vote of 84-10.
The Biden-Harris administration is setting an example for the future of American politics, reflecting the diversity of their constituents in America.