The first debate is nothing short of a dumpster fire. 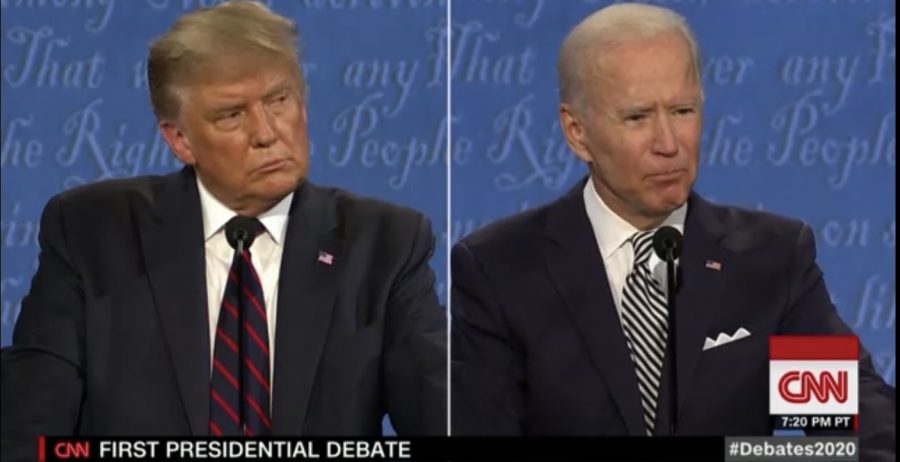 By Ethan Alonzo, EDITOR-IN-CHIEF
“Will you shut up man? This is so unpresidential.”
After the Sep 29th debate between President Donald Trump and former Vice-President Joe Biden, this one statement will stay in the minds of anyone who watched the debate. Between the desires for muted microphones, rolled eyes, and an increased number of google searches asking if they can move to New Zealand, Twitter was alive with debate watchers suffering. As millions watched Biden and Trump go at it on the American people’s pressing issues.
From global warming and economic recovery to COVID-19 solutions and healthcare, each talking point was met with interruptions from both sides. However, President Trump was notably causing the majority of interruptions. It came to a point where moderator Chris Wallace had to give President Trump a verbal warning. When the President asked why Wallace hadn’t given Biden the same warning, Wallace quickly replied to the President stating that he has been doing the majority of interrupting.
Both debate participants had statements that people will remember throughout this election season. However, one’s silence may speak louder than the things he said.
The list of statements President Trump has said during the debate was long, but not entirely factual. One statement was presumably about Multnomah County Sheriff Mike Reese, stating Portland’s sheriff supports him. Shortly after, Reese tweeted that as the Multnomah County Sheriff, he has never supported President Trump and never will.
Including calling COVID-19 the China virus, stating he was the one to bring back Football, and openly debating moderator Chris Wallace, one thing President Trump didn’t say involved the Proud Boys. Instead of denouncing the white supremacists, President Trump told the Proud Boys to “stand up and stand by.”
On the side of former Vice President Biden, Biden did his best to stay calm amongst the interruptions. While there was the occasional shush towards the President’s direction, and at one point, Biden openly called Trump a clown, Biden did his best to keep his nerve. At one point, however, Biden was visibly angry has President Trump mentioned the Armed Forces, and by extension, his son.
Overall, if this debate served as a preview to election season, then the American people are in for a ride. The debate warranted a disappointed sigh from viewers at some points, while other moments made viewers facepalm. Regardless, the upcoming months will carry more weight than past elections. Whoever is chosen to lead the nation will have to deal with the current political climate. Whether it is Trump or Biden who will wear the title of “President of the United States,” the selection will be met with those who believe the decision was incorrect.