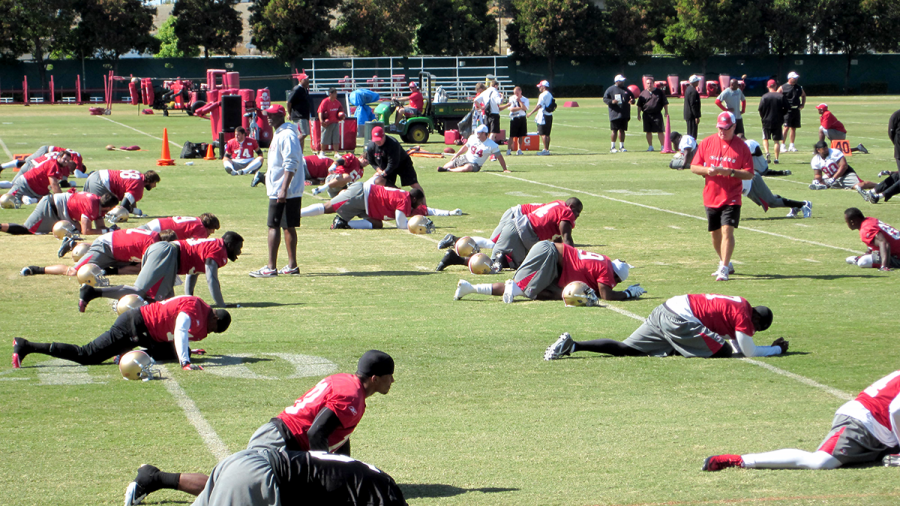 By Dylan Lazaga, STAFF WRITER
The NFL’s 100th season has officially concluded, with the Kansas City Chiefs claiming victory over the San Francisco 49ers in Super Bowl LIV, 31-20. The 49ers certainly will be working hard to make a return trip to the big game, but the upcoming offseason presents a difficult task in accomplishing that goal.
Offseason needs
Unlike the last two seasons, the 49ers won’t have much cap space to work with to fix their issues on both sides of the football. The team is currently projected to have approximately twenty-one million dollars in cap space, but considering that seventeen of their own players are free agents, difficult decisions abound.
The primary decisions general manager John Lynch will be tasked with are the contract extensions of all-pro tight end George Kittle and defensive end DeForest Buckner, both of whom enter the next season in the final year of their rookie contracts.
Lynch will have to navigate trying to extend both of them and also deciding on which key players, such as Arik Armstead, Jimmie Ward, and Sheldon Day, will be willing to re-sign for reduced salaries.
The team will be also looking to address the cornerback position in April’s NFL Draft, where they will be the thirty-first pick. The opposite position of Richard Sherman was one of the 49ers’ weaknesses during late in the regular season and the Super Bowl.
Other potential needs may be a No.1 wide receiver and an interior offensive lineman. Unless the 49ers re-sign veteran receiver Emmanuel Sanders, they will need to address replacing him either through free agency or the draft. Scouting an interior offensive lineman could also be in the works if veteran Joe Staley considers retirement in the offseason.
Burning questions that need answering:
Is Garappolo really the 49ers’ QB?
Heading into 2019, questions surrounded Jimmy Garappolo’s ability to lead the team following his ACL injury in 2018. While Garappolo was a key contributor in some of the 49ers’ late-season games, he only threw the ball twenty-seven times in the two playoff games before the Super Bowl.
In Super Bowl LIV, prior to the 49ers losing the lead, he was twenty for twenty-six on passing attempts and a touchdown and interception each. After losing the lead late in the fourth quarter, Garappolo was only one of six on passing attempts, including an overthrow to a wide-open Sanders, and the game-sealing interception.
The biggest issue highlighted on Garoppolo all season was his overaggressiveness. All season, he mostly averaged an interception per game and his Super Bowl-ending interception solidified the criticism on his rash playmaking.
If Garappolo wants to give the 49ers organization firm belief that he earned his lucrative contract to be their quarterback, he will need to make smarter decisions.
Will Shanahan’s mixed coaching eventually cost him his job?
Head coach Kyle Shanahan’s questionable play-calling yet again cost him a Super Bowl. In contrast to his very aggressive calls in Super Bowl LI, he played it too safe in his latest big game appearance, even at the game’s early moments.
For example, Shanahan had a chance to retake the lead in his team’s last first-half possession; however, he elected to run the football thrice before calling for a long George Kittle pass play that ended up being reversed due to offensive pass interference.
Closing out games has been a frequent problem for Shanahan, including the Atlanta Falcons’ blown twenty-five point lead against the New England Patriots in Super Bowl LI. If he can’t fix that haunting mistake among balancing his play-calling, CEO Jed York will have to wonder how much longer he can trust Shanahan to be the head coach.
Losing the Super Bowl was clearly a heartbreaker for the 49ers, but getting back there will be much challenging, with both talent, financial, and mental hurdles awaiting their path. There is a lot in store for both the team and fans alike.