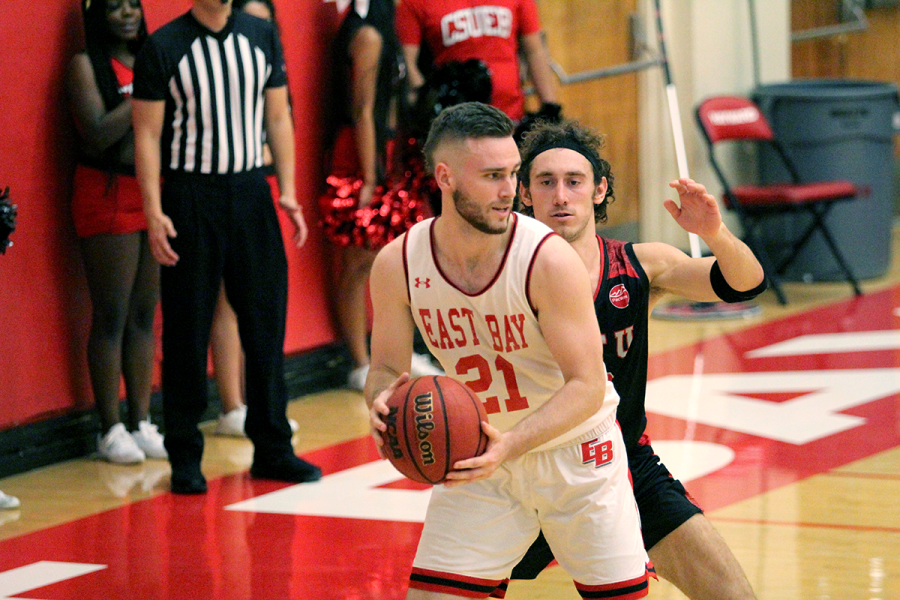 A season preview
By Will Barnett, CONTRIBUTOR
The California State University, East Bay Men’s Basketball team began their season with high hopes as they aim to build on their recent success from last year that ranked them inside the top 25 teams in the nation for the first time.
Last year the Pioneers finished at a record-breaking 22-8. This was their best record in the program’s history since joining the California Collegiate Athletic Association Conference.
The Pioneers will be without their star point guard, Juan Anderson, who graduated last semester, leaving a huge hole for the team to make up on the offensive end. During his playing career at CSUEB, Anderson set a school record for assists in a game and was voted to the NCAA West Region First Team.
Coming into the 2019-2020 season the Pioneers were picked to be a top-three team in the CCAA, according to this year’s Men’s Basketball Preseason Poll. They are currently behind Cal Poly Pomona and CCAA basketball powerhouse University of California, San Diego.
During the offseason, the Pioneers added four new members that they hope will contribute to their success. The Pioneers added three California natives, including Kaito Williams from Sacramento CA., Julian Lopez from Hacienda Heights CA. and Isaiah Saams-Hoy from San Jose CA. The team hopes that they will fill Anderson’s shoes as they develop as three of the team’s guards.
The Pioneers also added freshman forward Cory Fiddes from Melbourne, Australia. Fiddes will join fellow countrymen Senior Trent Warren as part of the team’s deep range threats at the small forward position.
With the season still in its early stages, the Pioneers have compiled a 3-1 record so far, beating Bay Area rivals Holy Names University and Notre Dame De Namur University before narrowly losing to seventh-ranked Pac-West Conference team Academy of the Arts by four points. The Pioneers notched their third win of the season against Dominican University at home last Friday, Nov. 15 by a score of 79-73.
Last year the Pioneers prided themselves on a strong defense that proved difficult for the opposition. In the 2018-2019 season, the Pioneers held their opponents to just over 43 percent from the field and under 30 percent from beyond the arc. This year has proven no different. Through the first four games, the opposition has shot just 38.5 percent from the field and just 34.7 percent from deep.
It appears that improvements will have to be made on the offensive end to accommodate the Pioneer’s standout defense and to live up to the expectations from both fans and preseason polls. Throughout the first four games of the season, the Pioneers are shooting a below-average 44.8 percent from the field, 36.4 percent from three and just 63.5 percent from the free-throw line. If the Pioneers can improve on these numbers they will surely be a force to be reckoned with in the CCAA.
Head Coach, Bryan Rooney believes that success on the offensive end will come from players trusting each other.
“The biggest jump we can make offensively is improving our trust level,” said Rooney. “When we share the ball we get better shots and shoot a higher percentage. Our next step is trusting one another to consistently share the ball.”
During their matchup against Academy of the Arts, the Pioneers shot just 33 percent from the field for a 21 total made shots. However, 17 of the made shots came directly from an assist. This is an extremely high percentage and a clear indication that when the Pioneers play team ball they are just as dominant on the offensive end as they are on the defensive end.
If the Pioneers can match their offensive output with their defensive output, the team will surely be in a position at the end of the regular season to not only compete for a CCAA Conference championship but possibly compete with the best teams in the nation.
The Pioneers will open up conference play against California State University, Los Angeles on Thursday, Nov. 21 at home where they will look to show just how dominant they can be.