Von Luck’s Memoir is a Tale of “Duty” and “Fatherland”

History is an unremitting waltz that moves to the three beats of war, peace and revolution.

Hans von Luck’s war memoir “Panzer Commander” showcases the life of one man caught up in an era of social revolution, brutal war and tenuous peace. Von Luck’s autobiographical account of his service in the Wehrmacht during the Second World War paints a picture of a man who lived his life according to the code of one who was both an officer and a gentleman.

Duty is the human virtue upon which von Luck centers his remarks. It is out of a sense of duty to ‘fatherland’ that von Luck uses to explain his devoted service to further the war goals of the Third Reich.

The same quality that drove von Luck to become a father to his men was at the same time the quality which allowed him to reconcile self-doubt he may of had working towards the goals of National Socialism. It is to von Luck’s credit that he does not spend much time bogged down in trying to explain away his actions on behalf of the party of Hitler.

The dilemma of maintaining a professional and apolitical military is a question that deserves contemplation. While the Prussian junker milieu that the author came out of is far removed from contemporary American society, the reader can take something more out of von Luck’s tale than the blow-by-blow tale of campaigns ranging from the invasions of Poland, France and Russia and beyond.

This is not to say von Luck’s description of the campaigns in which he fought is less than gripping. From the occupation of France and the first forays into the Soviet Union, to his service under Rommel and his famed Afrika Corps and experiences as a prisoner of war in Russian captivity, the human drama of men at war leaps off the pages and into the imaginations of the reader. 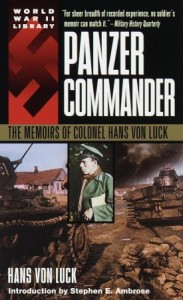 His writing is detailed, with the images crisp and standing out clearly in one’s mind’s eye. In short, von Luck glosses over neither the horror of war no glorifies it.

Rather, he sets out to give an account of what he witnessed firsthand. When compared to the gold standard of World War II memoirs, Churchill’s “The Second World War”, von Luck’s prose seeks no self-aggrandizement or glorifies his particular role or contribution. Rather, it commits itself to telling the tale of one man’s experience in war.

While von Luck may not have been the jackbooted Prussian decked out in SS paraphernalia living in the imagination of a generation raised on World War II-theme first-person shooters or Band of Brothers, the author’s perspective represents a more attuned window into the war as it was experienced by the German fighting man.

In the grand scheme of events, the author was just one man among many, dancing to the same endless waltz of history. While the steps he trod upon were well traveled—well worn by the footsteps of many a warrior—it is not every day that we read a blow-by-blow account as honest and forthcoming as von Luck’s description of the war as he fought it.