A reunion we didn’t know we needed 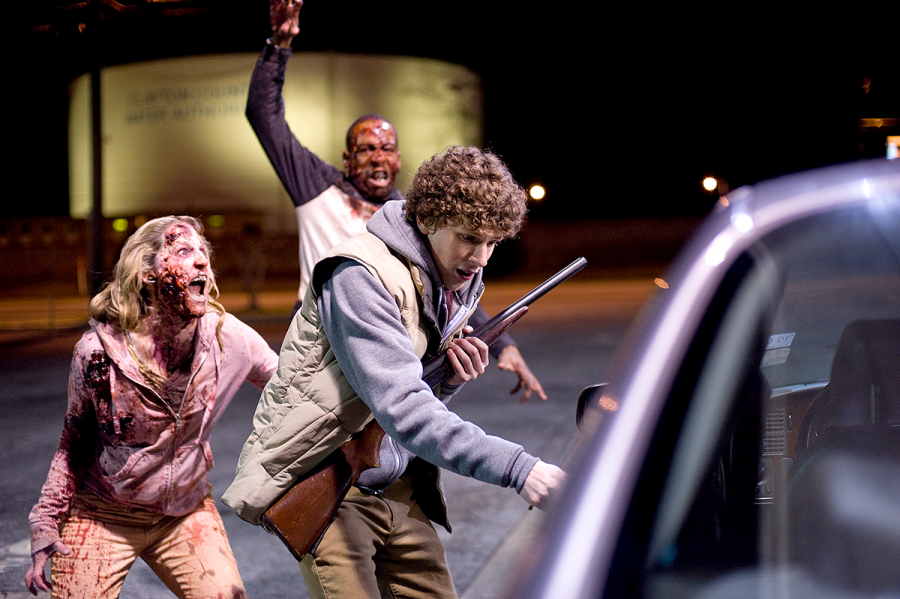 PHOTOS BY FAN THE FINE MAGAZINE/FLICKR

“Zombieland: Double Tap”
Zombies have just invaded your town and eaten all your friends and neighbors, you’re probably doubling down and fortifying your house. However, do you remember a few simple things while you were prepping for the end of the world? Maybe a toothbrush, or a flashlight, or even plastic baggies?
None of these things would immediately cross your mind to pack, unless if you are a fan of the cult hit “Zombieland.” Thanks to the diligent creators of these films, you may have actually thought to bring those things. Now is the time to commend the creators almost a decade later, as director Reuban Fleischer releases the long awaited sequel “Zombieland: Double Tap” released on Oct. 18, on the original film’s ten year anniversary.
Along with the returning director, the original apocalyptic zombie slaying cast has reunited after all this time. The line up includes Academy award nominees Jesse Eisenberg, Abigail Breslin, Woody Harrelson, and Academy Award winner Emma Stone, returning as the foul mouthed but lovable Tallahassee.
An entire decade has passed since the apocalypse, and it has changed our heros for the better. The film shows the cast take on zombies with more cohesiveness skills, and displays new tactics and methods of attack that each character has developed over this time. The zombies have been busy and have slowly adapted and evolved into new types of zombies which are classified as Homers, Hawkings, Ninjas, and the most deadly T-800’s. With the apocalypse forever adapting, our characters are left with nothing but one thing to do: survive.
We are also introduced to new survivors, including the forever pacifist Berkley and the gun toting foul mouthed but stunning Nevada whose cursing and slang is on par with Talahasse. The dynamic duo Albuquque, and Flagstaff were also a new addition, who were probably the director’s second choice to cast if Eisenberg and Harrelson said no to the first film. Finally, the last new cast member is the bubbly yet idiotic savant Madison played by Zoey Deutch. Her one liners and “blond humor” can be called one of the saving graces of this film.
The characters bring on the laughs and indirect or direct references to the first film. However, the new dynamic of characters also forces repeats of jokes and one scene is primarily used to explain the similarities between Columbus and Flagstaff which makes for a funny yet forced comedic moment that leaves you wondering how the scene is going to further the story.
The film even goes as far as to introduce a new verb to our vocabulary. “Murraying” someone means to sneak up on a fellow survivor and cause them to kill you. I’m sure that’s exactly how Bill Murray wanted to leave his mark on the apocalypse. Having your name attached to a method of death is probably one of the highest honors you can have within a zombie infested world.
As far as sequels to a comedy or horror film goes, this film pulls together and makes a watchable few hours of entertainment. However it does not bring many new plot devices to the narrative and felt more unnecessary and rushed than it should have.
If you’re hoping for an edgy, original, edge of your seat type of film, then this is sadly not the film for you. The occasional forced references, repeated jokes, and lack of character development helps remind you of what this film is: a fun, campy, almost unnecessary sequel to a great film.
Instead of viewing a new story and worrying about the well-being of characters you may have been attached to for 10 years, it felt more like a reunion between friends that was used as a means to simply check in.
It felt as if Fleischer was too excited to be returning to do another one of these films, so he wrote the script too fast, turned in his rough draft and presented it as the final project. For having 10 years to work on this project, you think he would have had a few new jokes up his sleeve as opposed to the recycled gags this film brings.