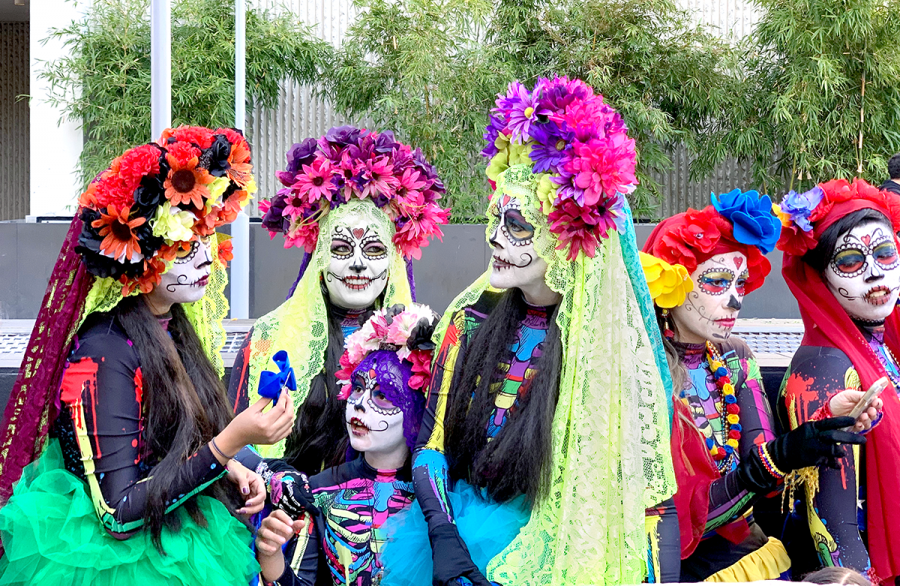 Just because a loved one has passed away, that doesn’t mean they are gone from your life. They are still with you in the memories you hold of them, in the ways you act that reflect off the things they teach you, and the stories you share of their lives. Regardless of how long it has been since they have walked this earth, as long as you keep them in your heart, they are with you.
Sometimes there are special days that call for a little more in the department of remembering a loved one. One of those special days is of course Día De Los Muertos, or Day of the Dead.
October is the month of Halloween, an annual holiday for people of all ages to be allowed to pretend to be anyone they desire and receive treats from the neighbors.
Well, at least that’s how society celebrates the popular spooky holiday today.
The holiday originated back in Europe about 2,000 years ago, where they held the ancient Celtic festival of Samhain. The Celts would dress up in frightening costumes in hopes that it would ward off the spirits and ghosts.
It was not until the late 1800s that Halloween made its way to America, which curated the holiday more for communities to gather together to celebrate ghosts, witches and giving out treats to young trick-or-treaters.
Apart from celebrating the exciting and spooky culture of Halloween in America, there is a much older tradition dedicated to the dead.
Día de los Muertos, also known as The Day of the Dead, has been a longtime Mexican tradition. The holiday formally dates back about 3,000 years ago, where it began as a ritual honoring the dead in pre-Columbian Mesoamerica. The holiday begins on Oct. 31 and carries on through until Nov. 2.
Día de los Muertos is celebrated all over Latin America as well as amongst the Mexican population that resides in the United States.
The holiday revolves around the theme of death, but for individuals who celebrate Día de los Muertos, it is more than that. The holiday is about honoring deceased loved ones by celebrating their memory in cemeteries and by welcoming back their soul through food, drinks, and lively music.
Though Día de los Muertos is an exciting three-day event for the dead, it also focuses on a more serious tradition for Mexican families.
Mexican cultures often have a shrine dedicated to their loved ones, often displaying ofrendas inside their homes.
Ofrendas are offerings placed on their loved one’s altar to honor their memory and is intended for welcoming back their soul. It is also a tradition for families to display sugar skulls to represent their loved ones.
To get into the spirit of the holiday, San Jose held their Annual Día de los Muertos Procession and Festival on Sunday, Oct. 20, 2019.
“For me, [during] this time around it is special, because it is about celebrating the afterlife and showing my appreciation,” stated Jordan Valentino, an attendee from the festival.
The festival first kicked off with their parade, where people of all genders and ages had their faces colorfully painted resembling La Calavera Catrina, also known as Elegant Skull. There were beautiful performers wearing colorful feather headpieces and shell ankle bracelets, creating loud noises to amped up the crowd’s excitement.
“Here in San Jose, with such a large Hispanic population, it’s more advertised as a social gathering. Día de los Muertos has been more glorified in films, such as CoCo. In the film, it is about remembering the dead, but for us, we always try to remember the dead and not just one day,” expressed Robert Buenrostro, a participant from the parade.