Of the many issues that are engulfing the current political climate, anti-immigration and society’s attitude regarding those coming into our country are the topics with the least amount of grey area. The rhetoric politicians have expressed in the past few years has dramatically uncovered some of the racial biases Americans seem to carry.
However, Award-winning author Reyna Grande is one of the people that is trying to change the cultural perceptions related to undocumented immigrants, one book at a time. 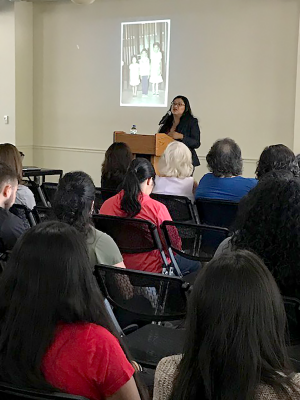 The diversity and inclusion student center recently kicked off its Latinx Heritage month with Mexican-American author Reyna Grande as a part of their cultural awareness series this year. Both students and community members gathered to discuss the selected theme of discussion for LatinX month, “Building Dreams Not Walls.”
Born in Iguala Guerrero, Mexico, Grande crossed the border at the age of nine to reunite with her parents in Los Angeles. She openly discussed the ways she managed to navigate through life and overcome the fear, stigma, and trauma that comes along with being an undocumented immigrant.
“When I crossed the border, the first person that I encountered was the ‘coyote,’ the smuggler who helped me and my family to get across, and the second was the border patrol agent-the person who kept us from getting across. And throughout my life, those are the two types of people I have encountered,” Grande told the audience.
Grande, an accomplished author, motivational speaker, and teacher, has written several award-winning books that include “Across a Hundred Mountains,” “Dancing with Butterflies,” and “The Distance Between Us,” which has become required reading in schools across the country.
She shared how by writing “The Distance Between Us” and her newly released memoir “A Dream Called Home,” she was able to understand her journey and acknowledge the people who have contributed to her growth and success.
“In both of these books I talk a lot about borders, and when we think about immigration we always think about the physical and geographical borders. But I feel like immigrants encounter all kinds of borders, like language, cultural, legal, career, and gender-related borders,” Grande said. 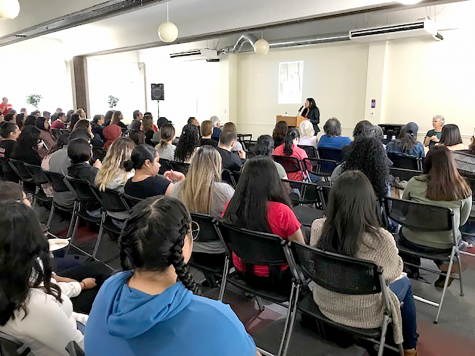 Grande reflected on the importance of providing immigrants with resources and safe spaces that help nurture their growth in a time where poor immigrant families are viewed as social burden and a threat to national security.
She explained the conflicts she faced while attending the University of California, Santa Cruz as a creative writing major at a time when the institution did not cater to Spanish speakers. She described meeting another Coyote, Marta Navarro, a Chicana literature professor who has mentored her and instilled belief in her to become a professional writer.
“As a writer, I feel the need to continue writing our stories and celebrating who we are. I feel as though part of celebrating who I am is also acknowledging the people who have helped me become who I am,” Grande said.