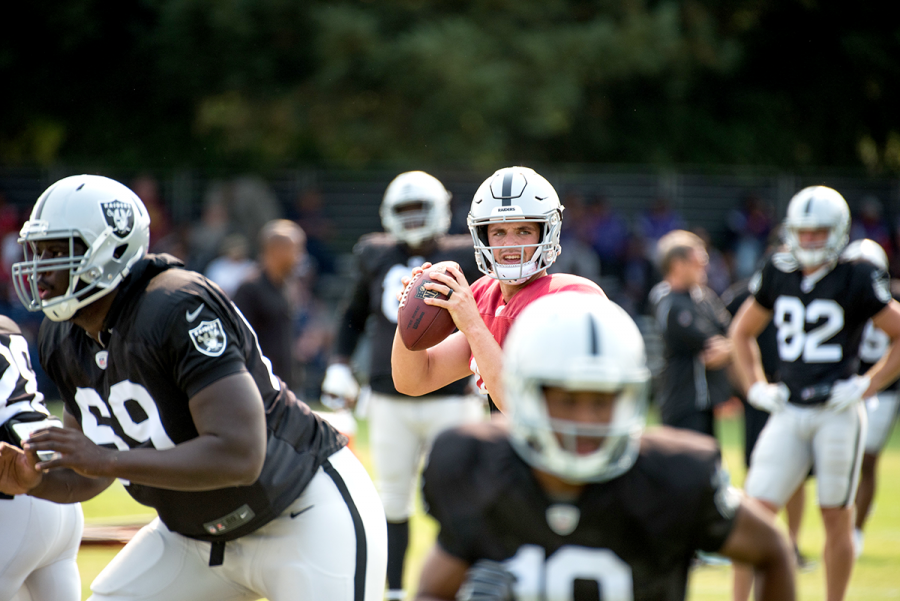 When the Oakland Raiders took the field on Monday night in the final season-opening game in Oakland, the team did so without star receiver Antonio Brown.
The Raiders took on division-rival Denver Broncos in the NFL’s primetime slot on Monday night football with a different look on offense than the team planned to have all offseason.
It was clear from the start that quarterback Derek Carr and the Raiders were unphased by the loss of Brown, as Carr picked apart the Denver defense with precision all night. Carr completed 22 of his 26 pass attempts, for 259 yards and one touchdown.
Oakland also saw significant contributions from offseason additions Josh Jacobs and Tyrell Williams. Jacobs, the rookie running back, amassed over 100 yards from scrimmage, with two rushing touchdowns in his NFL debut.
Williams, the veteran receiver in his Raiders debut, led the team with six catches for 105 yards and one touchdown.
With the game on the line in the fourth quarter, Oakland needed one first down to seal a victory. On the sideline, Carr told coach Jon Gruden he wanted to run a quick pass to Williams to put the game away. Gruden put his trust in both Carr and Williams, who executed as planned, to wrap up a 24-16 victory.
In his first game in Oakland, Williams proved that the Raiders have plenty of potential offensively, even as Brown departed to the New England Patriots.
Brown, the incredibly talented receiver who forced his way off of the Pittsburgh Steelers and arrived in Oakland via trade, proved to be even more incendiary off the field than skilled on the field. After an offseason filled with issues, from injured feet, to a helmet grievance, Brown’s situation came to a head last weekend.
Brown, after a heated dispute with general manager Mike Mayock last week, was told the team planned to fine him for conduct detrimental to the team, and suspend him for Monday night’s game. Brown issued an apology in front of the team and held a short press conference where he said he was excited to put the past behind him and get to work.
However, the drama was far from over as Mayock indeed followed through on his threat and fined Brown. In doing so, Mayock laid the foundation for the Raiders to void the nearly $30 million in guaranteed money that Brown was owed by the team, according to NFL.com. Once the Raiders voided his guarantees, Brown posted on Instagram, demanding his release from the team.
The Raiders released Brown on Sept. 7, just six months after he was acquired from Pittsburgh.
Once Brown was released, the Raiders smartly brought back a local fan-favorite and one of the standouts of the preseason, receiver Keelan Doss. Doss, from Alameda, Calif. and alumni of University of California, Davis, signed with the Jacksonville Jaguars practice squad after the Raiders released him. Oakland was able to lure Doss back from Jacksonville with an offer worth $795,000 guaranteed, according to NFL.com.
By releasing Brown, the Raiders seem to be going back to more of a team mentality, as evidenced by the performance in the week one victory over the rival Broncos.