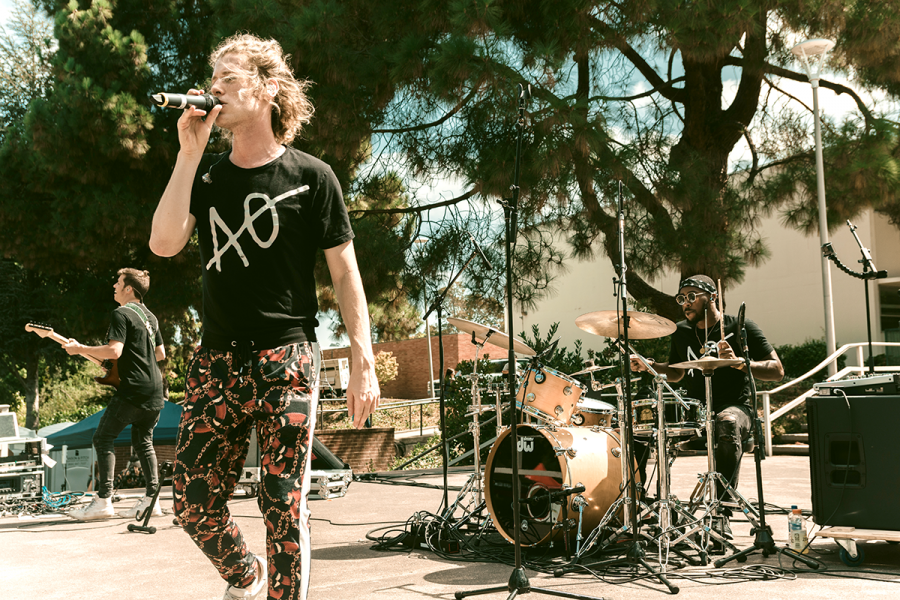 Almost Owen Brought High Energy to CSUEB
Guest performers Almost Owen brought in a crowd of students to let loose during their live set on the campus of California State University, East Bay. Al Fresco, CSUEB’s annual fall welcome festival, got students grooving to the rhythm and beat of live music under the sunshine.
Almost Owen played some original tracks to start off their set and followed with covers of songs like “Closer” by The Chainsmokers, which students sang along with the band. People danced as Almost Owen performed and they did not care who was watching. Students were able to let their carefree side out and got a chance to break away from school work and just enjoy the entertainment Associated Student Incorporated provided.
“Live music is definitely the best part,” Victoria Agbulos said after dancing during Almost Owen’s set. “[They were] amazing!”
Almost Owen hit the mark, performing cover after cover of popular songs while still bringing their own sound. The band interacted with the audience during and after their performance and were seen mingling with students playing cornhole and taking photos.
The band traveled from the East Coast, Boston, Mass., to perform live during the 31st annual Al Fresco festival. They played live music on the drums, bass, and keyboard, keeping the audience on their feet. East Bay students did not disappoint in bringing that same vivacious vibe right back.
“Loved the energy coming from the students at CSUEB,” Isaac Haselkorn, the lead vocalist of Almost Owen said. “It was a pleasure and an honor to perform. We can’t wait until the next time.”
Al Fresco brought in entertainment, free food, rock climbing, and games. There were performances by our very own dance team, Eclectic Pulse. The cheer team also livened up the party when they invited the crowd to join in on the “Cupid Shuffle.”
There were about 125 clubs and organizations also in attendance, who set up tables to provide needed information to students. There were tons of things students could do at Al Fresco so they could have a good time and experience what the Pioneers have to offer.