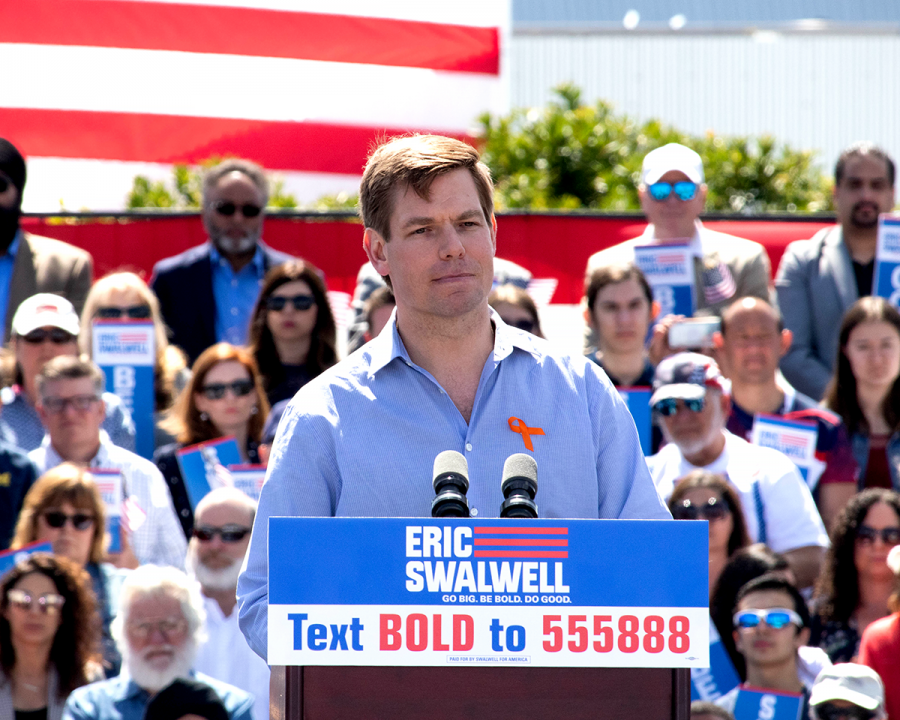 California East Bay Representative Eric Swalwell became the first major Democratic Presidential Candidate to drop out of the race. In a press conference at his campaign headquarters in Dublin, California, he announced that he will be focusing on his congressional re-election campaign.
“Today ends our Presidential Campaign,” said Swalwell on July 8. “But it is the beginning of an opportunity in Congress with a new perspective, shaped by the lives that have touched my mine and our campaign throughout these last three months. To bring that promise of America to all Americans.”
Swalwell announced that he was running for President during an appearance on The Late Show with Steven Colbert on April 9. He formally kicked off his campaign with a hometown rally at Dublin High School, his alma mater, on April 15.
He told the crowd in April that he knew that they would face an uphill battle, but he believed that they had the power to win.
“I told my wife, staff, voters and supporters that we were running for only one reason and that was to win and to make a difference,” said Swalwell.
Swalwell focused his campaign on tough gun reform laws, calling for mandatory nationwide gun buyback program, according to the New York Times. In addition, he brought attention to the student debt crisis, using his own experience of having student debt. He outlined a college plan that would expand work study and public service loan forgiveness programs for students that have student debt.
He acknowledged that his poll numbers and his fundraising was low. Swalwell earned a spot in the first debate after registering one percent in three national polls.
“We had to be honest with our own candidacies viability,” said Swalwell.
He thanked the media for covering his campaign and “trying to catch him in the airport to ask him the tough questions while carrying their materials and cameras.” Swalwell also told reporters that “you aren’t the enemy of the American people.”
During the second night of the first Democratic Presidential debate, Swalwell told former Vice President Joe Biden “it was time to pass the torch” to the younger generation of Democrats that are more inclined to solve the issues of automation, climate change, student debt and end gun violence.
Swalwell hasn’t decided who he will endorse for President, but he acknowledged that there are a lot of heavy weights in the race, including former Vice President Biden and California Sen. Kamala Harris, and that was one of the challenges that his campaign faced.
“I’m around people who have this spirit of risk taking and learning from their failures and turning them into successes,” said Swalwell.