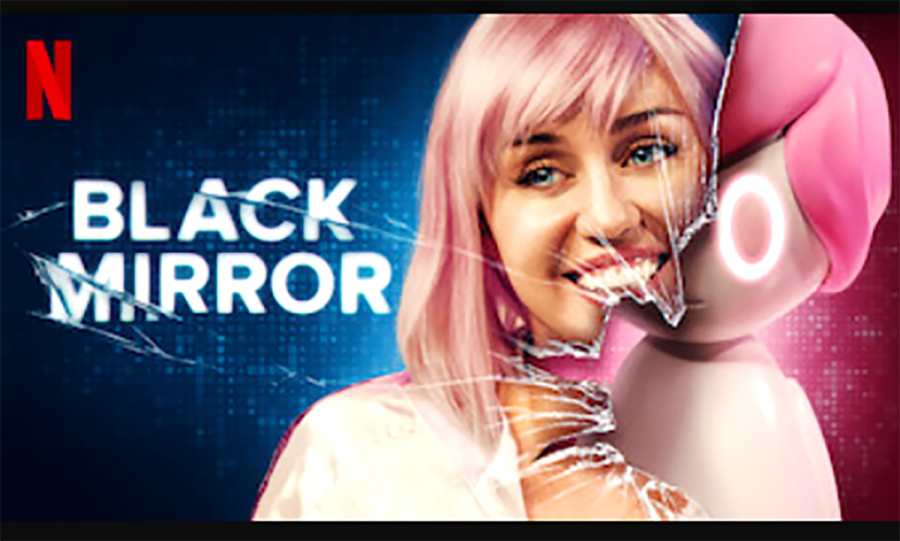 A bootleg Chun Li, a hostage crisis over social media, and a doll who curses like a sailor. Need some context? Give Black Mirror season five a try.
Fans of the British Broadcasting Corporation turned Netflix Original show Black Mirror all share the opinion that the newest season is universally dumb.
Black Mirror is a science fiction anthology series which was originally created by the BBC for two seasons and an hour-long special. Two years later, Netflix decided to pick it up and proceeded to push Black Mirror into one of the most talked-about shows.
With Netflix’s involvement, Black Mirror gained a bigger budget and more A-List actors such as Bryce Dallas Howard of Jurassic World, and Letita Wright of Black Panther.
For two seasons, Black Mirror came out with episodes that were filled with wondrous visual effects and even better acting. But when season five premiered, it was underwhelming to say the least.
So what happened?
An overarching theme of Black Mirror is how dependence on technology can take away our humanity. However, there is more to Black Mirror than that.
The beauty of Black Mirror is its ability to create a conversation. The majority of the episodes end with someone dealing with the consequences of that episode’s technological element.
A good episode of Black Mirror is like a well made buffalo wing. With a good buffalo wing, it’s spicy enough for you to feel the burn of the peppers but delicious enough to keep you wanting more. Same with Black Mirror. The endings are shocking enough to make you squint your eyes from the disturbing takeaway but not enough to make you stop watching.
However, what separates Black Mirror from other science fiction shows is how realistic an episode can be. One of the most well-known episodes, “Nosedive”, showcased the importance we place on our presence in social media. But Black Mirror’s take on the issue strays from the norm and turns it up to ten, taking the opinions we create from social media and putting them into real-life social settings. Each episode is chilling to the bone, making us take a second look on our desire to further technology.
But not every episode is meant to strike you to your core. Occasionally you are greeted with a heartfelt ending that, while is still layered with the haunting effect of technology, can leave you with a smile on your face. For every “Shut Up and Dance” style episode, there is an episode like “Hang the DJ” that gives the average binge-watcher a mental and emotional break.
This is where the newest season fails. Black Mirror is infamous for its bittersweet endings and creating feelings of uneasiness, but with season five, all of that is missing. The three-episode season drops all consequence and leaves the viewer craving for the dark endings they fell in love with.
In the three episodes of season five, the characters each got a happy ending, being able to enjoy their lives without dealing with the drawbacks of their technology use.
Where Black Mirror season five fails, another science fiction anthology series found success. Love, Death, and Robots, which has been renewed for a second season, pushes the envelope on what we find comfortable to watch. While walking the line between disturbing and beautiful imagery, episodes as long as 17 minutes tells its story while an episode of Black Mirror would take an entire hour. If you felt underwhelmed by the latest season, you may want to explore the less known parts of the Netflix Originals line of shows.
Black Mirror has shown how much potential it has. The Netflix special Bandersnatch was the first of its kind, as a choose your own adventure style episode with a collective 5 hours of footage. If they get cleared for a season six, while no announcement has been made, they may be able to fix the mistakes of their newest installment.