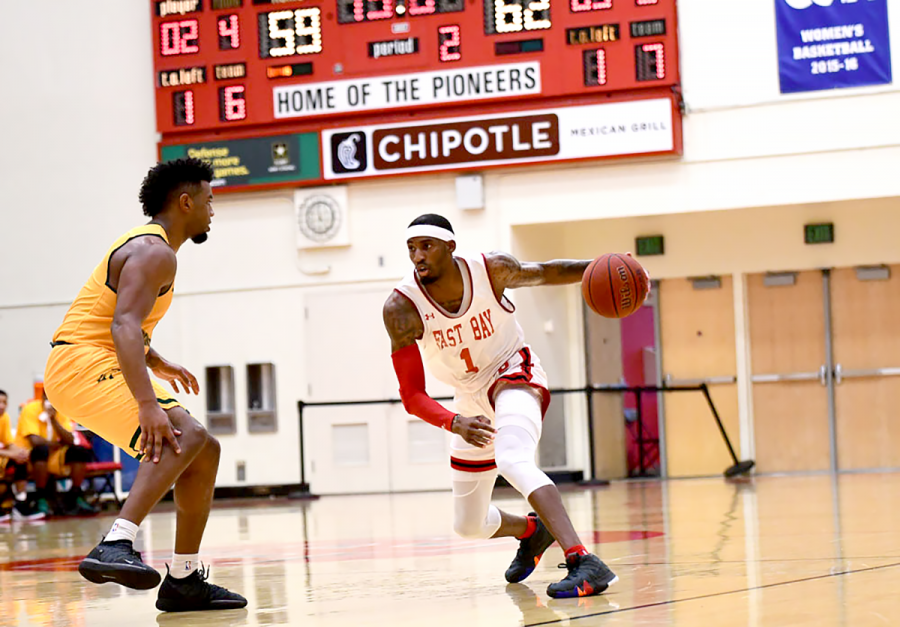 PHOTOS BY THE KEDAR DUTT/THE PIONEER

The California State University, East Bay men’s basketball team won two crucial back-to-back away games this past week in Southern California against California State University, Los Angeles and California State University, Dominguez Hills.
The Pioneers now stand at the top of the California Collegiate Athletic Association (CCAA) with a record of 13-4 in the CCAA and 18-5 overall.
The Pioneers have put together an impressive season thus far. They have surpassed their previous record from last year (6-16 in CCAA, 10-16 overall) and have broken a record for wins this season.
Both Southern California games were not an easy win, however. On the first stop of the road trip, CSUEB defeated CSULA 83-73 in a thrilling overtime game.
Junior Forward, Ant Navarrete had an impressive game, as he contributed 16 points and 10 rebounds. This went on record as his sixth double-double of the season.
The Pioneers outscored the Golden Eagles 13-3 during overtime, which gave CSUEB their 12th win in conference play.
The Pioneers traveled on to CSUDH after their win against CSULA and won another game in dramatic fashion.
CSUEB defeated CSUDH, 74-72 in a tight competition. Senior Guard, Juwan Anderson hit a game-winning shot to close the game out and finished with 12 points and seven assists on the game. Senior Guard Evan Wardlow also chipped in with a team-high 20 points.
The Pioneers’ bench played excellent and outscored the Toros 20-2. The bench points were led by redshirt freshman John Duff who had 12 points and was 5 for 6 on shooting.
The win against CSUDH gave the Pioneers their 13th win in conference play, which placed them above University of San Diego (12-4, 17-6 overall) as the number one team in the CCAA.
Senior Forward, Ant Navarrete stated that the team’s success this season has come from focusing on the task at hand.
“We just handle what’s in front of us whether it being practice, film, getting us ready for our next opponent and taking it one day at a time,” Navarrete said.
The Pioneers are back at home this week with back-to-back Homecoming games. The first will be against San Francisco State University today at 7:30 p.m. and the other against Sonoma State on Saturday, Feb. 16 at 3:00 p.m.