Warriors looking for another championship 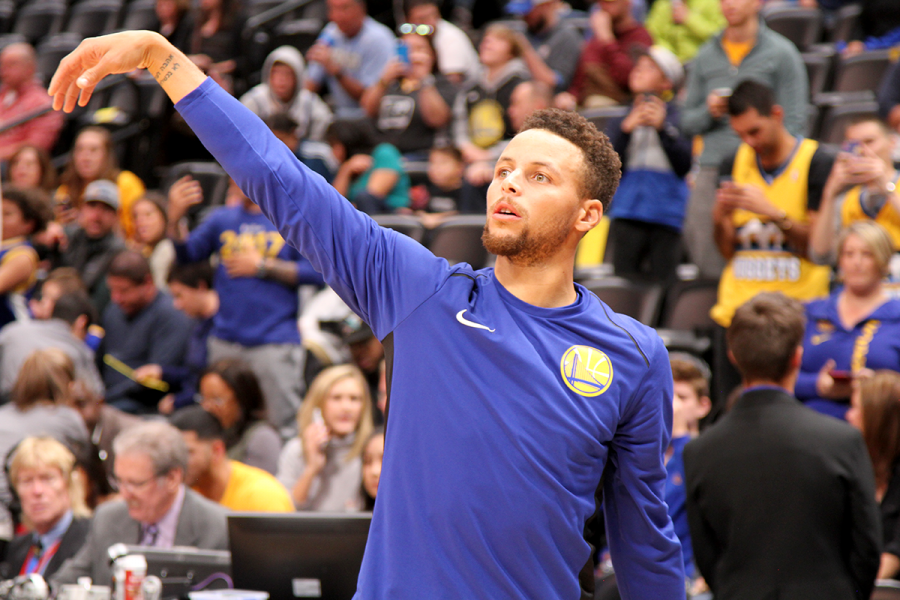 The NBA season is finally here and the Golden State Warriors are doing what they do best: win.
In a fascinating month of Golden State basketball, the two-time defending champs have the best record in the league at 10-1 and the team is not showing signs of slowing down.
The Warriors faced the Cleveland Cavaliers in the last four NBA Finals, but without star player LeBron James, the Cavaliers have plummeted to the bottom of the league. A new team will have to have to emerge in an attempt to dethrone the Warriors.
The Houston Rockets were the closest team to defeating the Warriors in the playoffs last year in the Western Conference Finals. Golden State barely escaped the seven-game series against them. Surprisingly, the Rockets are having a rocky start this season and are becoming a non-existent threat.
The Toronto Raptors, Boston Celtics and Milwaukee Bucks emerged as frontrunners in the Eastern Conference even though it is still early in the season.
The Raptors have the best record in the East at 10-1 with the recruitment of Kawhi Leonard as a key part to their success.
The Celtics seem like the best contenders to face the defending champs as a healthy Kyrie Irving and Gordon Hayward rejoin the lineup.
Irving underwent a knee-surgery in April and missed the entire postseason while Hayward suffered a season-ending ankle injury in the first game of last season.
“I just think with the tools that they have, and the way the game is set up today, with small-ball and all that stuff, Al Horford can switch onto guards,” Warriors power forward Draymond Green said to The Athletic. “That would be their five in that lineup. And then obviously, you’ve got Jayson Tatum, Jaylen Brown, Gordon Hayward, Kyrie, Terry Rozier, Marcus Smart, Marcus Morris.”
Stephen Curry, Klay Thompson, Kevin Durant, and Draymond Green, the Golden State Warriors’ big four, are dominating their opponents. Curry and Durant have led the way on the offensive end while Green has shown flashes of his passing ability, leading the team in assists with 7.9 per game.
Curry has emerged as an early MVP candidate, averaging 31.3 points per game. He is on his way to having the best shooting season of his career, making 52.5 percent of his field goals and shooting 50.8 percent from behind the arc.
Thompson started the season in a shooting slump, only banking five 3-pointers through the first seven games of the season. However, Thompson overcame the slump on Oct. 29, breaking the NBA record for most 3-pointers in a game with 14. His teammate Curry held the previous record of 13.
The Warriors embody the unselfish culture of basketball through their ball movement which is the focal point of their offense. Golden State passed the ball eight times which led to an alley-oop slam dunk by center Damian Jones during a single possession against the Minnesota Timberwolves on Nov. 2.
The Warriors will have five All-Stars on the floor when All-Star center Demarcus Cousins joins the starting lineup. However, Cousins’ stint with the team will be limited to this season. Head coach Steve Kerr mentioned in a press conference that Cousins will not be resigning because of salary cap concerns.
Golden State is on a seven game winning streak and are looking to improve to 11-1 as they face the Milwaukee Bucks on Thursday at Oracle Arena. Giannis Antetokounmpo’s strong solo presence and the dynamic duo of Curry and Durant should make this game intense.
If the Warriors continue to play the way they have been playing, a fourth championship in five years seems attainable.