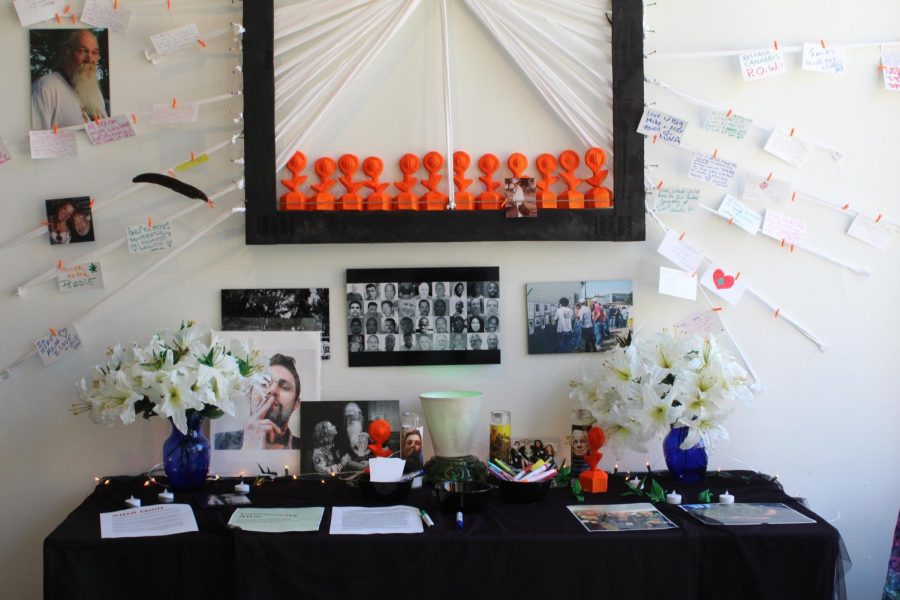 On an easel near the front of Gallery EVB is a picture of a man with a smile on his face standing behind jail cell bars. The caption on the photo says, “Dennis Perron in San Bruno Jail – 1975.” Perron was a cannabis activist and a leader in the movement to legalize marijuana. He co-authored California’s Prop. 215.

Prop. 215, also known as the Compassionate Use Act, was passed in 1996 and legalized the use of medical marijuana. Perron died in January, shortly after California began the legal sales of recreational cannabis. He is one of the many activists, advocates, entrepreneurs and other cannabis community members featured in the exhibit “Stories from the Underground: Reflections from the Shadows” at Gallery EVB in Oakland.

“There’s a lot of things happening historically,” Sarah Ceti, co-producer and curator for the exhibit told The Pioneer. “There’s a lot of big individuals who have just passed on who really drove this movement, started it even. These are people that many have no idea who they are. I think it’s really important that everyone know where medical cannabis came from and why they have the right to be able to consume it because it didn’t just happen.”

The exhibit is hosted by the Cannabis Community Foundation and features both amateur and professional photos that show the history of the cannabis movement in California. The intention is not only to pay tribute to the cannabis community members and activists, but to remind the public that there is still work to be done, Joanna Arenstein, co-producer told The Pioneer.

According to Arenstein, they plan on adding more photos from the community. Currently there are photos of protests, rallies, community events, grow rooms and even trimming sessions. There is a series of black and white portraits of California’s cannabis activists done by photographer Mark Rutherford.

Located in the corner of the exhibit is a community altar. The altar has a photo collage of 36 individuals who are serving life in prison because of cannabis related offenses. It is a reminder that while many of us are enjoying the freedom of consuming, purchasing and selling cannabis today, there are many more who have fought, been imprisoned and even died because of cannabis-related incidents.

The caption at the altar says, “You are invited to share your stories and pictures of your friends, family and loved ones that have been adversely impacted by the war on drugs.” There is a stack of index cards and colored sharpies available for those who wish to share a message. Some people have added personal photos of their loved ones to the altar.

“Stories From the Underground: Reflections of the Shadows” had a soft opening on April 20 but they will have their official grand opening at the end of May. It will be available to the public until July 31.