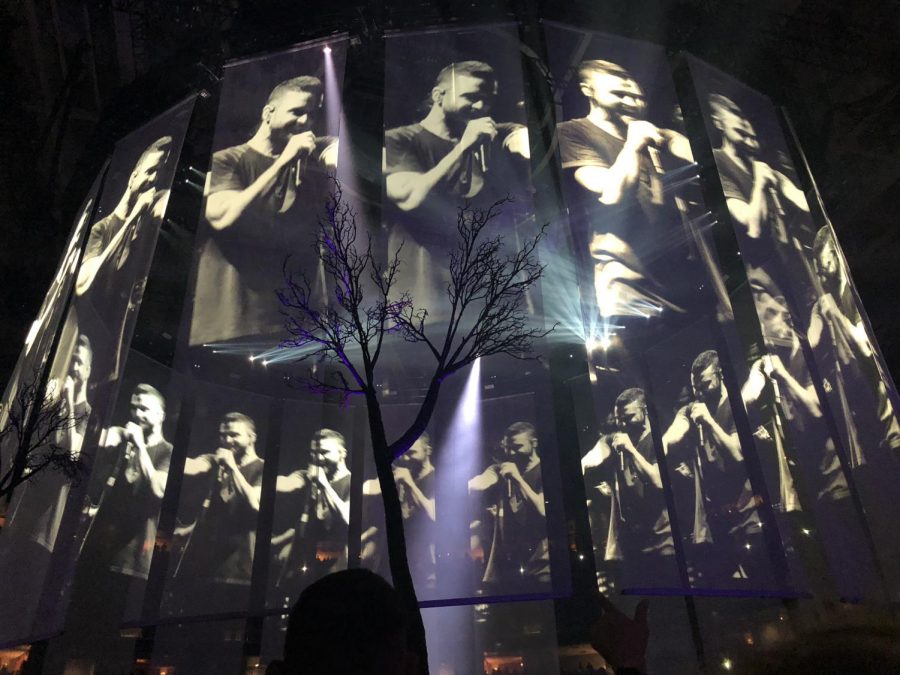 Justin Timberlake performed in Downtown San Jose at the SAP Center this Tuesday. It was his first of two back-to-back shows at the arena. The Man of the Woods Tour is the pop singer’s sixth world tour.

At 9:15 pm the house lights went dark and the stage lights came up. Timberlake’s band, backup singers and dancers, The Tennessee Kids, entered the stage and greeted the crowd as they took their places. Timberlake’s shadow appeared and he walked into the spotlight.

He opened the show with “Filthy,” the first single off his latest album, “Man of the Woods.” He transitioned into other songs off the new album like “Midnight Summers Jam,” “Say Something,” “Man of the Woods” and “Higher Higher.” In between these, he played some of his older hit songs.

Fans got to hear “Suit & Tie” where he wore a black suit jacket and danced with the orange microphone that pivoted on the stage. He sang “Future Sex Love Sounds,” “SexyBack,” “Senorita,” “Cry Me A River,” “Mirrors,” “My Love,” “Rock Your Body” and “Drink You Away.” The show ended with a performance of “Can’t Stop the Feeling.”

Timberlake’s stage made a snake like curve back and forth through the floor seating. There were three different stages along this route. In some places on the floor, there was a 360-degree view of the entire performance. The stage was set up with fake trees and images of the Man of the Woods logo. The ceiling had panels that showed images of Timberlake, scenic views of the outdoors and video clips during intermission.

Part of the show was dedicated to showcasing the vocal talent of Timberlake’s backup singers. They all sat around a small fire while Timberlake played guitar and panels displayed visuals of the moon and stars. It was like camping with JT and the Tennessee Kids. They sang covers of “Come Together” by The Beatles, “Ex-Factor” by Lauryn Hill and “Dreams” by Fleetwood Mac.

Throughout the show fans were on their feet, dancing with friends and singing along to almost every lyric with Timberlake.Timberlake is known for his theatrical performances and this show was just that. It complete with smooth dance moves, cool light shows and Timberlake’s high energy pop hits. The Man of the Woods world tour is set to run until January 2019.