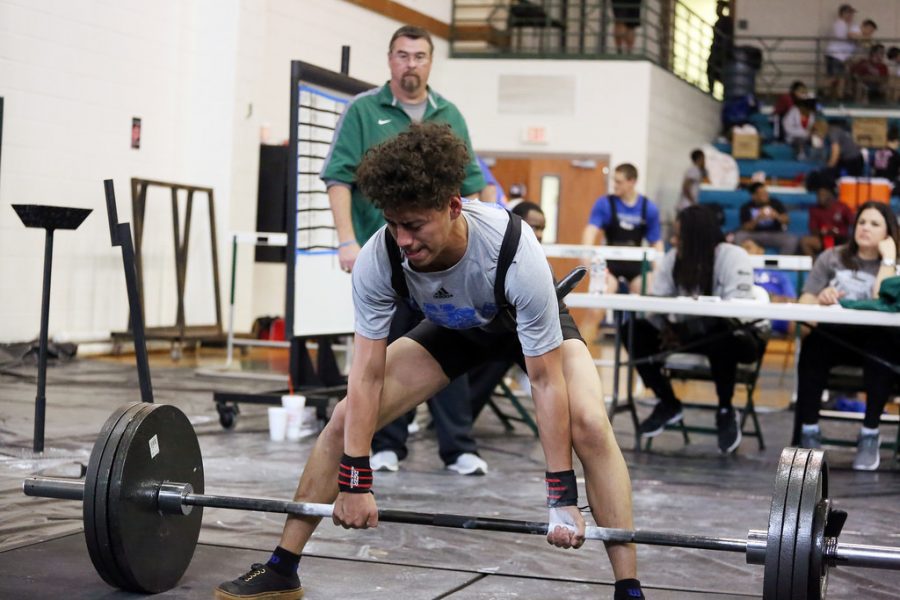 At powerlifting competitions, the environment is contagious. Despite all the nerves, jitters and adrenaline floating around, lifters fire each other up with back slaps and shouting. The crowd yells “UP! UP!” Everyone gets into their zone and it’s fun to watch coaches and athletes share in the excitement and reward of months of rigorous training.

Powerlifting is a style of competition where athletes train to perfect three lifts: the squat, bench press and the deadlift. Each competitor is given three attempts per lift for a total of nine attempts on the day. In most organizations, the competition begins with the squat, follows with bench-press and conclude with deadlifts.

Participation in powerlifting is increasing statewide. In 2013-14, roughly 300 to 400 Californians had memberships with USA PowerLifting, the leading powerlifting organization in the United States and a member of the International Powerlifting Federation, the governing body of powerlifting internationally. Today, between 1,200 and 1,300 California athletes are members, according to the database that the organization maintains. This database contains local, state and national meet results, current state and national records, and profiles for each of its members.

“The ability to share training videos, and competition footage on social media has really helped elevate the exposure of the sport,” USAPL meet director and competitor Carlos Leon told the Pioneer. “California has become the second largest state in USA Powerlifting memberships in the last few years; part of that is attributed to the leaders of the sport putting an effort into providing more opportunities for lifters to compete in quality meets.”

Competitors at powerlifting events are appraised by three judges who asses criteria related to proper technique and the ability to follow their commands. Each of the three lifts has its own unique criteria for judging. A successful lift is rewarded with three white lights, but a failed lift is indicated by two or more red lights. As long as you receive two white lights, “The lift is good!”

Lifters compete in categories corresponding to their age, weight and gender. Between males and females, there are a total of 17 weight classes and four age categories.

“Pursuing strength can be tedious and challenging,” said Marcus Wong, winner of the 83kg/182lb open category at the SJSU Spartan open on Feb 3. “However, if you aspire to become a better version of yourself in any way, powerlifting will help you grow both mentally and physically.”

“The powerlifting community has been very welcoming towards me as a novice lifter,” said Andrew Tang, the recent winner of the 120kg/265lb junior category at the San Jose State Spartan Open. “Powerlifting is a sport that tests your strength against others, but more importantly against yourself. The only thing standing in your way is yourself, and the ability to conquer your mental and physical weaknesses is what makes this sport so appealing.”

Competitors may go into a meet not knowing anybody, but by the end of their first lift they will no doubt have made friends and supporters. Whether lifters failed or succeeded their attempt, they are always met with physical or verbal encouragement by their peers. It’s rewarding for lifters to break their personal records on the platform, but it’s more rewarding to see them step off the platform and see that people they just met are genuinely excited for them.

“Don’t worry about being the only one who’s competing for the first time, there are usually many lifters competing for the first time at any given meet,” USAPL meet director Carlos Leon said. “To paraphrase a recent lifter, you may go into a meet not knowing anyone, but before you know it, you’re cheering them on like teammates and you leave the meet with new friends. If you wait until you have a “big enough” total, you’re going to look back and say “I wish I had started competing earlier.” So don’t think about it. Look up the next local meet and go for it!”