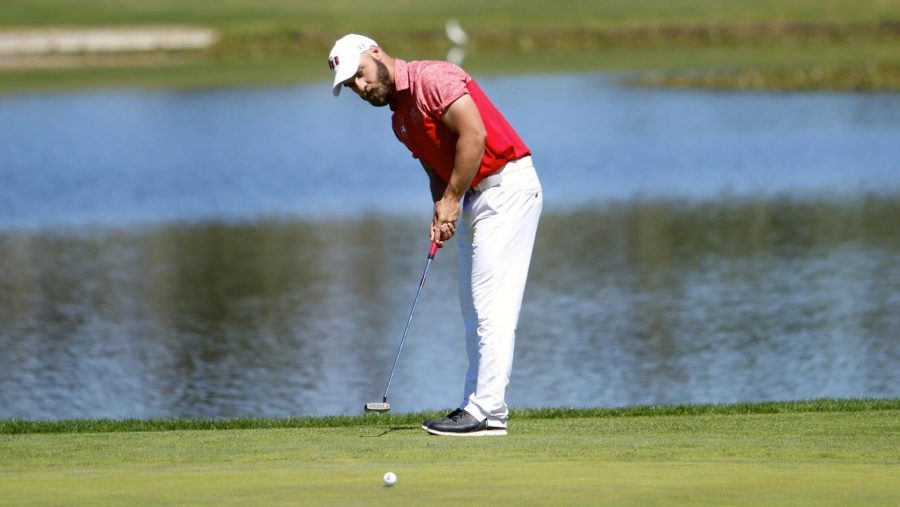 At The Club at Ruby Hill Golf Course in Pleasanton, golfers warmed up on the driving range and putting green waiting to get the first round of the Tim Tierney Pioneer Shootout underway on March 5 and 6.

Will Barnett, a junior from Melbourne, Austraila, had a solid two days overall. After a shaky round one score of 80, Barnett responded with a solid second round of 73, and he shot the low round on the final day shooting two under par (70).

“I think during the first round I was forcing it too much, trying to play too conservative. The next two rounds, I just told myself to just play the course the way I always do and it seemed to work well,” said Barnett. “Overall, we definitely weren’t happy with how we performed because it was our home event, and we felt as though we should have really contended.”

After an hour and a half frost delay, the golfers swarmed to their respective starting holes. The foursomes all stepped up to the tee box one after another. They placed their ball on the tee, stepped back, took a few practice swings and deep breaths before stepping up to the ball and swinging. The ball went flying down the middle of the brown dead fairway.

“Frost delays are always hard because it throws off your warmup,” said Max Murai, a sophomore from Beaverton, Ore. “It’s hard because you want to start playing already, but with the delay, you have to wait, warm up and get focused again.”

As the temperatures started to heat up so did the competition.

Day two began the same way: cold and dry. The Pioneers tried to make a push to move up in the standings in the final round of play. They finished the tournament tied for 12th with Academy of Art shooting a 298 on the day finishing 47 over par. The Pioneers missed placing 11th with Stanislaus State shooting 46 over par and one stroke ahead of them.

Colorado Springs made the jump from fourth after day one to take the tournament shooting a 280 and six over par in total. Cal State Monterey Bay and St. Edwards both took home a share of second place shooting nine over par for the tournament. Sonoma State 11 over par, took home fourth place, and Chico State rounded out the top five shooting 22 over par.

The Pioneers look to hit the links hard these upcoming weeks to prepare for the rest of the season and the conference tournament.

“We are really working on trying to get rid of the mental mistakes and to improve individually on the things that each one of us struggled with during the tournament at practice,” Carney said.

The season is still young. The Pioneers have only competed in their home tournament as well as the Bay Area Invitational in late February where they placed seventh in a field 16. The Pioneers will have a busy few weeks. They will compete in their biggest event of the year, The California Collegiate Athletic Association Conference (CCAA) Championship on April 23 and 24, which will determine whether or not they play in the NCAA Tournament.

“The things we are all looking forward to is the challenges of turning the season around and trying our best to make up for our mistakes,” said Carney. “Our goal is to get our ranking back up so we can be able to make it to regionals again like last season.”