Speedrunning comes to the Bay Area 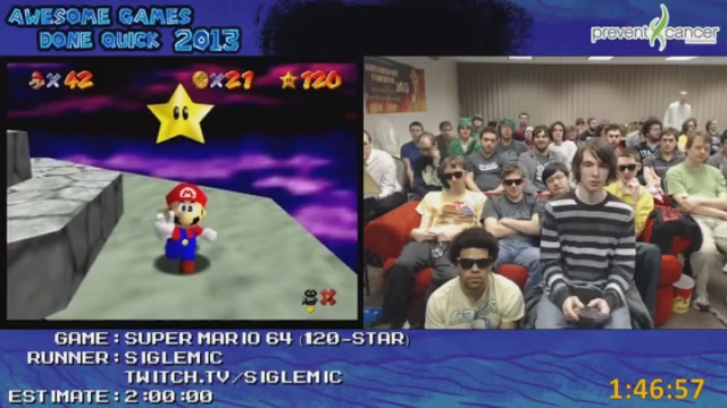 Some of the fastest runners will come together in San Francisco to showcase their skills. These are not runners or athletes in the typical sense. These are video game speedrunners meeting up for Calithon which is a four-day Twitch.tv live stream marathon from April 12 to 15 that showcases video speedrunners to raise money for charity.

Speedrunners use a combination of glitches and practiced the skill to skip entire sections of video games by cutting their time down to a fraction of what the game creators intended. They compete against and cooperate with each other for the fastest time possible. A few dozen speedrunners will participate in Calithon 2018.

Carl Wernicke, known as gymnast86 online, holds the speedrun world record in the role-playing game “The Legend of Zelda: Wind Waker HD.” What would take most gamers hours of gameplay over days or weeks, Wernicke can finish in one hour three minutes and thirty seconds. To do so can take a lot of practice.

“I practice perhaps 10 hours per week on the low end and up to about 20-25 hours on the high end,” Wernicke said. The consistent stress on his hands have developed into a chronic hand injury, though he says that he is now more cautious and has it under control.

The goal of all this practice is to achieve the world record, a title that Wernicke just regained in early March with his 1:03:30 time in “Wind Waker HD” after he lost it to another speedrunner in February. This record is in any percent category, which means there are no requirements or restrictions before completing the game aside from starting and then finishing at the end. Wernicke plans to improve his time again because other members of the speedrun community are improving their times as well.

Speedrunners of various games compete against each other for faster times on websites such as Speedrun.com. Where videos of the fastest runs are archived on leaderboards.

“There are both feelings of rivalry and comradery when it comes to comparing my times to runners of the same game,” Wernecke said. Speedrunners compete for a faster time, but they also cooperate to find ways to skip sections of games and improve everyone’s time overall.

Every year the speedrun communities come together at the bi-annual Games Done Quick speedrun marathons on Twitch. Awesome Games Done Quick (AGDQ) and Summer Games Done Quick (SGDQ) showcase speedrunners playing their preferred games, and show the various tactics that they use to quickly beat hundreds of different games to tens of thousands of viewers. These streams have raised over $14 million for various charities including the Prevent Cancer Foundation and Doctors Without Borders.

In addition to the very popular GQD Marathons, other speedrun marathons have started as well. Calithon 2018 is the third annual four-day speedrun charity stream hosted in California. The money raised at Calithon will be donated to Direct Relief which provides medical services to those in the wake of natural disasters such as the wildfires in California.

The speedrunners at Calithon play through their games to show the audience of thousands of viewers on Twitch their skills while they raise money for charity. To increase donations, there are incentives such as a speedrunner playing through their game blindfolded if a certain donation milestone is reached.

“SGDQ [in Denver] was considered the ‘west coast friendly’ event,” said Jeff Yochem, the founder of Calithon. “When they announced that it’s not in Denver anymore, it’s in Minneapolis. For some of us, at least for myself, I just couldn’t go to this anymore.”

Yochem said that he hopes that by hosting Calithon in San Francisco this year, the iconic city will gain more attention and bring more viewers than ever. Their schedule, featuring many speedrunners in a myriad of games, from classics like Sonic the Hedgehog (1991) to new hits like Super Mario Odyssey (2017), is available on their Twitter: @CalithonSR.