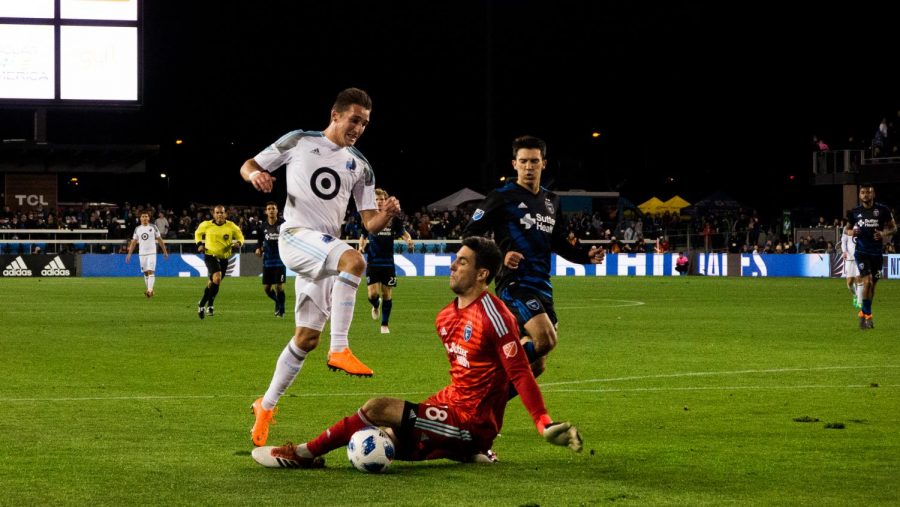 San Jose beats MNUFC at home 3-2
After making it to the playoff last season and a long and fast paced preseason the San Jose Earthquakes were ready to start the new MLS season at home with a bang. The plan was to walk away with a win and three point from the first match and that’s exactly what the Quakes did.

San Jose started the new Major League Soccer season by facing off and winning 3-2 against Minnesota United FC at home on Saturday, March 3 at Avaya Stadium. San Jose previously beat Minnesota at home during the last home game of the regular season last year to send San Jose to the playoffs.

The Earthquakes hosted their season opener this past Saturday at Avaya Stadium against Minnesota United FC. The Quakes previously beat MNUFC 3-2 during the last season regular season game to secure a spot in the plays for the first time since 2012.

Before the match started the Quakes honored Victor Bernardez who played for the team for six seasons with a signed photo of both him and the team. They went on to introduce both teams and right after that the match was on its way.

As soon as the match started both teams began applying pressure on the ball in order to set the pace for the half. It was the Earthquakes who set this pace after pressing the ball up field early in the match and keeping that pressure throughout the first half. The crowd started cheering and singing for the Earthquakes the entire first half and kept the energy going for their players.

The Earthquakes had possession and control of most of the first half and constantly moved the ball up field, then bring it back to their defensive third to try and build an attack again. MNUFC did have a few scoring opportunities during the first half with Ethan Finlay coming the closest and forcing Quakes goalkeeper Andrew Tarbell to come out and challenge for the ball.

After a hard tackle, Minnesota’s Tyrone Mears was shown a yellow card in the 26 minute of the match. After receiving a yellow card it was almost as if Minnesota hesitated and the Earthquakes capitalized on that moment of hesitation in the 27 minute.

Florian Jungwirth headed ball the ball from the midfield and Danny Hoesen was able to bring it down using his head. Valeri “Vako” Qazaishvili received this pass on the left side of the field and seeing the defenders who previously were marking Hoesen leave their mark to apply pressure, Vako passed the ball back to Hoesen. Hoesen ran up the middle of the field to meet the ball just outside the 18 yard box where he shot the ball on his first touch to the right side of the goal past MNUFC goalkeeper Mathew Lampson.

Immediately after scoring the first goal just a minute ago it seemed like Hoesen was going to get his second goal of the night but it was Vako who scored on the 28 minute of the match to give the Earthquakes a 2-0 lead in the first half.

Wondolowski jumped in front of a pass which he then recovered after it bounced off of him and pushed down the field. He then put in a low cross that seemed on target for Hoesen but he missed leaving MNUFC goalkeeper on the front side of the goal and leaving it open for Vako to slot the ball home. The quakes continued to control the ball for the rest of the first half.

Minnesota started the second half of the match focused and with an intensity to match the Earthquakes which earned them an early shot on goal. Quintana went down in the 54 minute of the match due to injury and was subbed out, forcing the Quakes to bring on Jimmy Ockford in his place.

The Quakes scored their third and final goal of the night in the 59 minute of the match. Eriksson played the ball to Godoy who was hovering outside of the 18 yard box. He then played the ball to Hoesen who was hovering at the edge of the 18 yard box with Vako. After a quick give and go from Hoesen to Vako then back to Hoesen to beat his defender he pushed into the right side 18 yard box and beat the MNUFC goalkeeper again, this time placing the ball in the bottom left corner of the goal and earning himself his first brace of the season.

As if energized by that last goal, Minnesota went on to attack and put more pressure on the Quakes with Christian Ramirez almost scoring in the 64 minute of the match. It wasn’t until the 82 minute of the game were Minnesota found the back of the net. Kevin Molino received the ball from a pass back after an early cross and was able to beat Tarbell and place it in the bottom left hand side of the goal.

Molino scored again in the 85 minute by receiving a ball just outside the 18 yard box, turning to his right and curling a low shot past Tarbell on the right side of the goal.

“It feels good, Minnesota is a good team, they got some great players but they’re coming to Avaya Stadium so we’re always expected to win. I’m glad it went our way tonight and I’m looking forward to the rest of 2018.” replied Tommy Thompson on what it felt like winning at home for the first game of the season.

“We started the half really well and we just let ourselves down there at the end,” said Shea Salinas reflecting on the second half of the game. “We weren’t stepping high, they made some good subs, guys came on and gave them energy. Something we’re definitely going to need to work on but what’s important is we got 3 points. We came to win the game and we did that.”