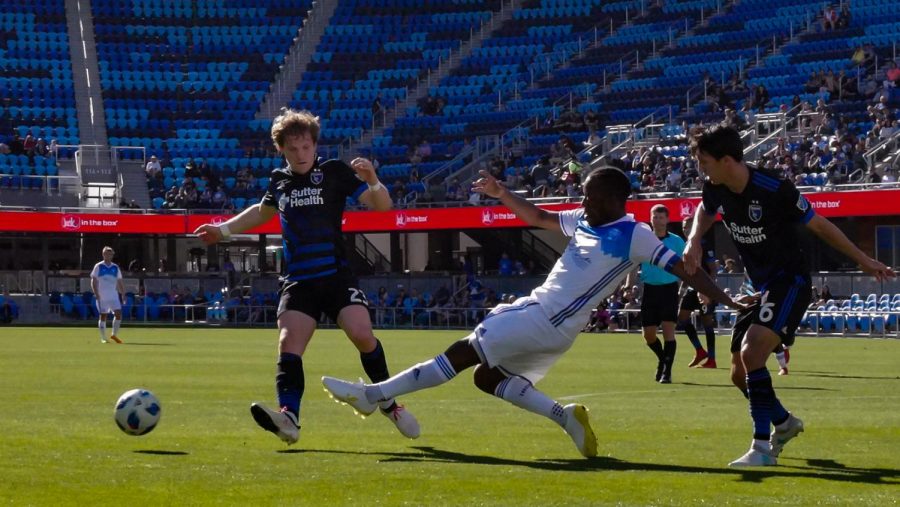 Earthquakes win 4-0 at home during preseason game
Preseason in any sport is the time to get hyped about new signings, check when your team plays at home and start predicting the glory of being champs this season just like you said last season. It’s no different for the Quakes. With only one home preseason game, the Earthquakes definitely came out to play and really showed their stuff.

The Earthquakes held their first match at Avaya Stadium against an opponent on Saturday after arriving from their training trip to Tucson where the Quakes faced both the Portland Timbers and Real Salt Lake at the Kino Sports Complex. The Quakes drew 0-0 against the Timbers and drew 1-1 against Real Salt Lake.

The Quakes’ starting lineup of players comprised of a majority of plays who saw action last season like Vako or Wondolowski. They also had a few new faces such as Magnus Eriksson, who has continued to be in the Quakes line up since the Black and Blue scrimmage, and Yeferson Quintana.

At the first whistle to start the game both teams began playing with an intensity that was incredible. Neither of the teams wasted any time in fighting for possession of the ball and when one team would lose it those closest to the ball would immediately put pressure on whoever stole it to try and get it back.

This intensity exhibited by both sides ultimately led to a goal and it was San Jose’s Danny Hoesen who opened the scoring in the fourth minute of the match. Wondolowski intercepted a bad pass that ricocheted off his leg and bounced to Hoesen who received it just outside the 18 yard box. After touching the ball to his left to create space, Hoesen shot the ball just inside the 18 yard box and beat the Reno FC keeper by shooting to the bottom left corner of the goal.

After scoring a goal so early in the match Reno FC seemed to have lost the intensity they started the match with and the Quakes capitalized on this. They controlled the ball for a majority of the time after that, occasionally losing it in the midfield prompting Reno to try a counter attack. Center backs Quintana or Harold Cummings would approach the attacking forward and apply pressure until they or another teammate could intercept the ball and bring it back to the other side of the field. Reno managed to get a few shots on goal in the first half and had a handful of corner kicks awarded to them due to their counter attacking.

The Quakes utilized the speed of both Shea Salinas and Valeri “Vako” Qazaishvili to continuously build up attacks on the left side of the field and once the ball was at the goal line they would pass it back to open players all around the 18 yard box. This constant switching of the ball from one side to another forced Reno to respond by changing from a man marking style of defending to a zone marking style. This type of defending means that there would always be players close to the ball even if they left an Earthquake player or two open.

The switch in defending style led to another goal by Hoesen in the 21st minute who received the rebound from Nick Lima’s shot on goal and scored his second goal of the match at close range. Lima got the ball from a bad clearance, opened wide to his left and shot the ball from outside the 18 yard box. Careless marking allowed Hoesen to receive the ball and tuck it away after a save by the Reno keeper.

The constant attacking and building from the left side of the field by Salinas and Vako eventually found its mark when only five minutes later Eriksson found the back of the net and scored the third goal for the Earthquakes in the twenty-sixth minute. Salinas ran the ball upfield and crossed the ball low to the ground where Eriksson was able to put the ball in the back of the net with no pressure on him.

Eriksson scored the fourth and final goal of the match in the thirty-seventh minute. Lima played another critical role in this goal, as he received the ball outside the 18 yard box and chose to cross the ball early instead of push forward and shoot. When Lima crossed the ball, a Reno defender barely got his foot on the ball causing it to ricochet behind another defender and into Eriksson’s path. The goalie for Reno, not having anticipated the ball ricocheting off his teammate, dove early and left an open goal for Eriksson to slot home the final goal of the match.

The start of the second half of the match picked up where the first half ended, with the Quakes putting immediate pressure on Reno. Reno put just as much intensity into their defending as they did in the beginning of the first half and kept San Jose at bay and managed to get a few scoring opportunities as well. Quakes keeper Matt Bersano, who was substituted in before the second half started, was able to take care of these shots on goal easily.

The Quakes answered back by having close attempts by Salinas, Vako and Quincy Amarikwa, who was was also subbed before the start of the second half. Salinas and Vako were able to get the ball into the 6 yard box but were unable to capitalize on those opportunities due to the Reno defense. Amarikwa had a low shot on goal from outside the 18 yard box which was quickly handed by the Reno goalkeeper.

About half way through the second half both Reno and San Jose substituted four or more players at once. After this substitution, the half seemed to balance out. A majority of the ball movement and play occuring in the midfield with the ball occasionally moving to either sides attacking third. Tommy Thompson and Joel Qwiberg had the two last actual scoring opportunities of the second half which ended goalless.

During the second half it was also announced that the San Jose Earthquakes and Reno 1886 FC had agreed to extend the affiliation between the Major League Soccer and United Soccer League clubs until 2019. The Earthquakes play their next preseason game on the road against rivals L.A. Galaxy on Feb. 17 and play a closed door friendly against Reno 1886 FC again on Feb. 22. The Quakes host the first game of the MLS season at Avaya Stadium on March 3 against Minnesota United FC.