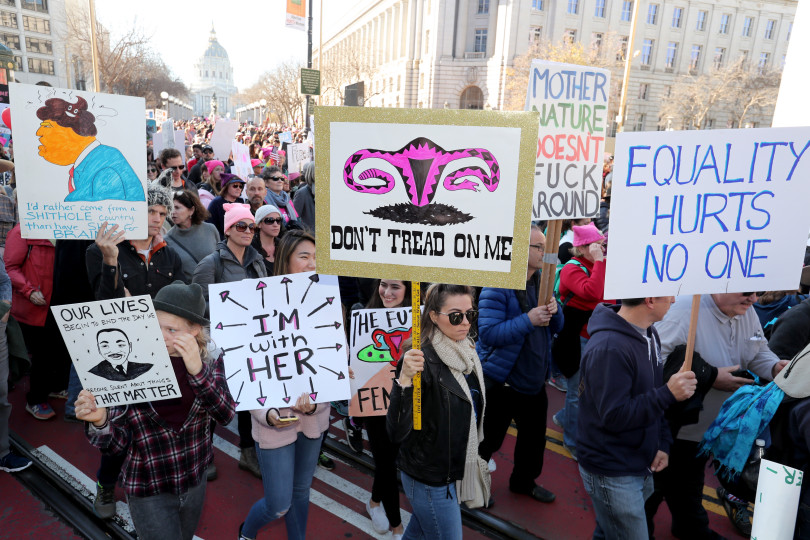 Thousands of demonstrators take part in the Women's march and rally at Civic Center in San Francisco, Calif., on Saturday, Jan. 20, 2018.

60,000 marched in the streets of San Francisco for the Women’s March
Theon Johnson joined the waves of crowds that marched down Market Street for the Women’s March in San Francisco on Jan. 20. Johnson, an associate pastor at the San Francisco-based Glide Memorial Church, marched alongside one group that convened in front of a stage at the Civic Center, wore pink beanies now synonymous with the women’s movement, waved signs — a pink peace symbol inside of the woman’s sex symbol, “I’m With Her” — and repeated the chant, “No hate, no fear. Immigrants are welcome here.”

“My hopes coming out of this march is that people will be empowered to claim their voice, to speak out,” Johnson told The Pioneer. “Women, in my opinion, represent the very best of our future. They are the most integral members of our community as we think about creating a future, creating a new life, creating new opportunities, creating tomorrow.”

The Women’s March started last year as a reaction to Donald Trump’s 2017 presidential election. His political views on various topics like immigration and human rights created a negative reaction from various groups of people.

The organizers of the Women’s March are focused on creating social change through women-led movements in hopes to grasp the the power of diverse women, educate the community on a wide range of issues and to stop the systems that oppress people.

“We’re building on a momentum of women talking, speaking out, addressing a political and sexual abusive power,” said Janice Mirikitani, 76, a San Francisco resident and Glide church member. “It’s really important for us to keep this momentum going and encourage women to continue talking, for men to continue to be in solidarity and be our allies so that we can change this country around.”

“Hear Our Vote” was this year’s theme for the Bay Area marches. The main focus was to get community members informed about human rights issues so that they could be encouraged to get down to the polls and vote for this year’s midterm elections.

“It’s not only being here in the streets, holding a sign protesting,” Alex U. Inn, Bay Area artivist/activist community leader, told The Pioneer. “It is what is happening behind scenes to ensure that change happens.”

The event began at noon, starting with speeches from an all-female panel of speakers. The crowd, a mix of ages, races and genders, gathered together with their expressive signs as one on this Saturday afternoon.

Each speaker that walked on stage came to talk about the group they represented and their feelings about a range of issues going on in communities and politics today.

“Let’s take our power to the poll!” exclaimed speaker Aimee Allison, president of Democracy in Color.

After the conclusion of the speeches in San Francisco, the crowd took to the streets to begin the march. It began at 2 p.m. and started at 7th and Market Street of the SOMA district of San Francisco.

The crowds poured into the streets holding their signs. The people in the march were led by three trolleys. The march ended at the Embarcadero Station.

While there are no official numbers on how many people attended women’s marches all over the country and world. Fortune Magazine reported it was less than the more than 3 million from last year. Marches were also held in Oakland and San Jose.

After the Women’s March, San Francisco held a meeting at the Jewish Community Center of San Francisco on Jan. 30. The panel was on racial justice entitled, “We Marched, We Rallied, Now What?”