CSUEB student turns a side hustle into a legitimate business 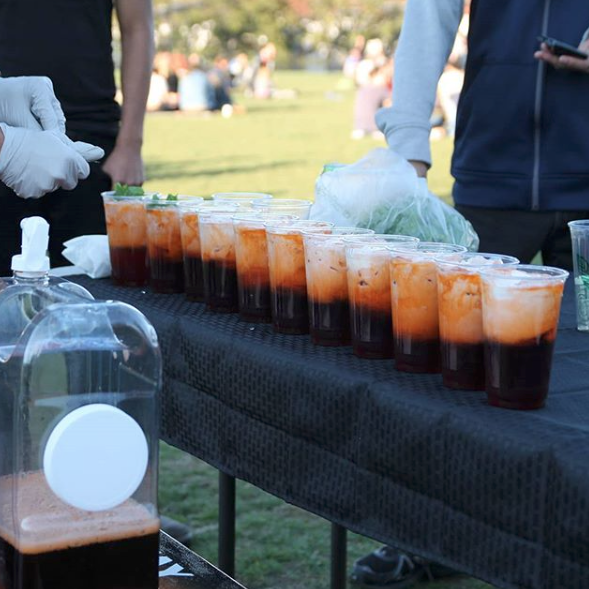 HustleTea is an East Bay special-tea
One guy and a cooler is an unusual place to get your tea or coffee from but if you’ve had HustleTea, then you know it’s not unusual at all.

Adrien La, 20, has been selling his aunt’s homemade recipes for Thai tea and Vietnamese coffee since December 2016 with some assistance from his brother, Kenneth La, and his cousin, David La. He sells his drinks at college campuses CSU East Bay, UC Berkeley and public spaces such as Dolores Park in San Francisco.

“The reason I started HustleTea is because I was tired of working minimum wage,” La told The Pioneer. “I wanted to become my own boss and do something I believed in.”

Within one year, La has turned a stand that only sold Thai tea into a brand that also sells clothing. However, while his business has grown, it has experienced growing pains. His business has been threatened by campus police, staff members and gang members. CSU East Bay’s Hayward campus in particular, despite an approval from President Morishita, is where he has had the most trouble with his business.

Sometime last year, La was asked by the University Police Department to no longer sell HustleTea on campus. He was told that he needed to receive permission from the school to continue to operate his business. He contacted Erhahon Hendrix, the student president of ASI last year, who then redirected him to the director of Aramark [La declined to state their name] who then told Adrien without further explanation at this time it was not possible for him to continue selling his drinks on campus because of contracts.

An officer from UPD could not disclose or accurately report on the incident between HustleTea and UPD as he was not present and there was no record of the incident. He did confirm that to sell food on campus, one has to go through Aramark for permission.

The officer also added street vending is not something new to CSU East Bay. For graduation, each year several street vendors pay East Bay an undisclosed but large sum of money in order to sell leis and other graduation novelties to graduates and their families. It’s not that street vendors like Adrien La and his HustleTea aren’t allowed, it’s that he needs permission to sell.

Aramark, the business that provides all of the food services at CSUEB, does not have any policy, code of conduct or rule listed on their site for street vendors on campus that prevents them from selling, but East Bay does. The CSUEB Vending Guidelines, available on the official university website, states that in order to sell on campus a vendor must pay fees and secure an approved permit prior to setting up. A vendor must also get their product approved by Commercial Services. As a student, La can vend at discounted rates.

Still, La has made efforts to legitimize his business outside of the school. This month, he received a trademark for his brand name. He has a food handler’s license that allows someone in the state of California to handle food but does not give one permission to sell. A street vendor in Hayward needs to register as one with the city as well as having a separate Business and Seller’s license from the state.

However, La is skeptical of these licenses and their ability to allow him to sell, “I’m working on all my legalities at the moment. Like I said, if I asked permission people would still deny me doing what I’m doing and not let me sell, with or without a permit.” Even though La is not necessarily allowed to sell his drinks, he hasn’t let this stop him. He continues to sell his drinks on other college campuses and public spaces in San Francisco.