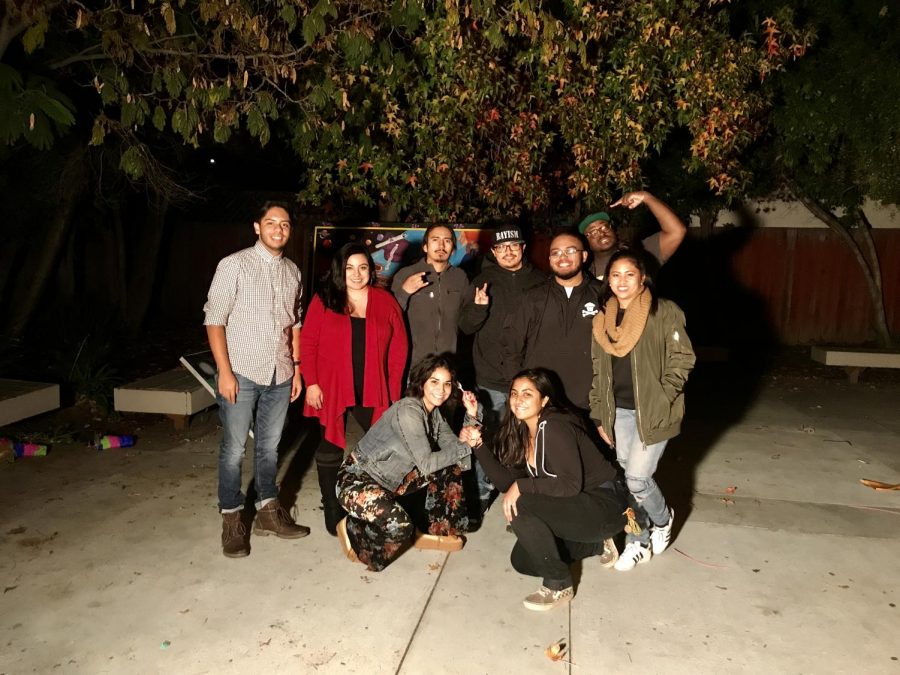 The Hayward Collective members along with some of the guest performers.

In November 2016, hundreds of high school students in Hayward walked out of their classes and on toward Hayward City Hall in protest of the President Donald Trump election. These protests led to some locals creating The Hayward Collective Organization.

According to the organization, “The Hayward Collective is a womxn, people of color, LGBTIQ+-led organization. We aim to build a community of accountability, equity, health and social justice through fluid stacktivism, art, advocacy, and self-care.”

The co-founder of The Hayward Collective is Rosaura Figueroa Mendoza. “I think from that [student walkout] it was really just a spark in seeing that there was so much energy around people wanting to do something, and be more involved in their community, but we needed to come together and be organized about it.”

The organization does not have one focus, according to Mendoza, but focuses on what is most prominent in the community. The Hayward Collective held an event at city hall on Jan. 19 to protest the inauguration, a Unity Through Community event in response to the violence in Charlottesville and a rally in support for DACA students.

“Let this not just be this one protest that we’re doing,” Mendoza said. “This has to be an ongoing thing that we’re building here in the Hayward community, because we’re not organized like that here in Hayward like they are in San Jose, Oakland and San Francisco.”

Mendoza, like many of the members of the organization, acknowledged that Hayward does not have the same reputation as other Bay Area cities when it comes to organizing, activism and grassroots movements. This is something that they want to change in the Hayward area.

“Currently we are just trying to dig into the housing crisis. What is going on with housing,” said Mendoza. “What do we need to inform ourselves in order to do something about housing? Rents are going up and people are being evicted without any reason, and that happens here in Hayward.”

“Fluid stacktivism” is a term that was born in Hayward and is included in their mission statement. Mendoza explained, “Haystack is Hayward’s nickname, and so stacktivism is really our take and our brand of activism and fluid stacktivism means that we’re not a single issue organization.”

On the evening of  Nov. 18, The Hayward Collective led the Hella Hayward Art: Taking Back November event in commemoration of the one year anniversary of the student walkouts.

The event took place at the organization’s regular meeting spot at La Familia Neighborhood Resource Center. The room was filled with artwork like photography and paintings from Hayward community artists. The first live performers were Ivan Flores and his son, Eliseo Flores as they introduced the crowd to Afro-Latino music when they played the African djembe and marimba.

The Flores’ goal is to preserve and bring out the Afro-Latino culture through music. Ivan struggled with his identity growing up in the Bay Area as an Afro-Latino and stated that learning about his people’s history has helped him find himself and pass it down to his son.

There was also powerful spoken-word by queer Chicana poet, Leticia Guzman. As a Chicana who is part of the LGBTIQ community, Guzman’s poetry reflects her struggles and feelings of finding and revealing her identity.

“It brings me into safe spaces where I can be myself, without having to think whether I need to disclose something,” Guzman told The Pioneer.

Film producer and director Jonatan Garibay presented his short film that focused on the views of Latino youth on social and economical issues with a touch of young love and adventure. “My main focus is in film just cause for me, I’m really passionate about wanting to create a change in terms of representation from what we normally see,” he told The Pioneer.

Garibay aims to represent the Latino community through the film industry. He enjoys film and wants to create a more inclusive perspective in film where characters are not being stereotyped and instead create a real, raw and positive image.

“I hope with me, that at least my perspective [of representation] can help others feel less alone,” continued Garibay. “I know I wouldn’t help everyone but at least it’s something that will provide further to the overall narrative and I also hope to inspire people in the future.”

Garibay’s purpose is to create films where the audience can connect more with it. He wants to relate his films to the underrepresented and make them feel less marginalized and acknowledged.

These were not the only talents during the event. There were also rappers, singers and other artists who performed and introduced their work. The Hayward Collective’s goal was to create a spotlight in the Hayward community and bring out the many different talents that the people of Hayward has.

The Hayward Collective meets every second and fourth Wednesday of the month from 7 p.m. to 9 p.m. at La Familia Neighborhood Resource Center in Hayward. Their official website is thehaywardcollective.com and they can also be found on Facebook.