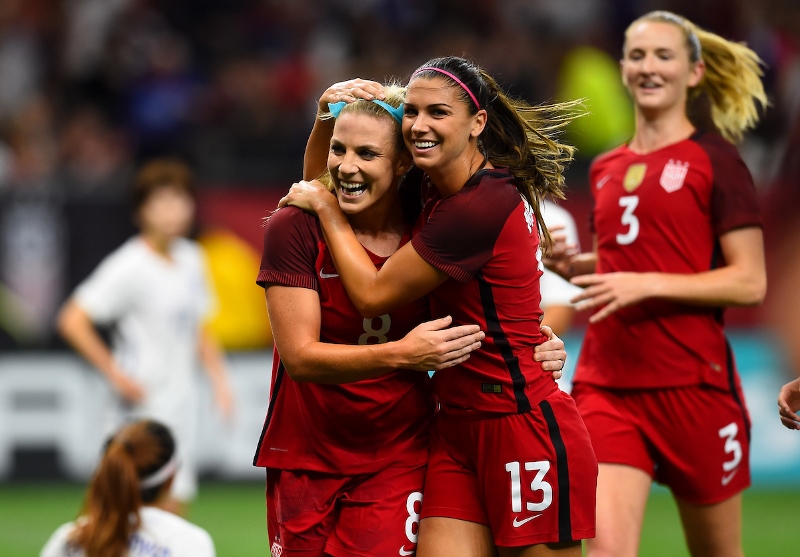 Men’s soccer struggles to perform, but women’s soccer have dominated for years
The men’s US national soccer team was dealt a crushing defeat against Trinidad & Tobago on Oct 10, which knocked them out of qualifying for the World Cup in 2018. This was the first time in several decades that USMNT didn’t qualify for the world cup: they had previously been dominating the international scene in North America.

As a result, soccer fans and analysts are now wondering why men’s soccer in the States is struggling to compete on an international level. But now that the spotlight is off the men’s team, it’s the perfect time to talk about women’s soccer.

The US Women’s National team (USWNT) has been outperforming the men’s team in international tournaments and in FIFA rankings for several decades. They are currently killing every team, and haven’t gotten nearly as much coverage as the men’s team.

FIFA started ranking women’s national teams in 2003 and ever since, the USWNT has been ranked number one team in the world for nine years with their lowest rank being second for a total of six years. In the same amount of time the men’s national team has only broken into the top ten ranked teams in the world once in 2005 and have an average ranking of 22 within the same time period.

The USWNT won more Gold Cups, which is the regional tournament for North America, than the men’s team. The women’s team currently has a tally of seven Gold Cups with the most recent of their trophies being earned in 2014. The USMNT has been able to win the Gold Cup five times since the competition began.

Although the Women’s soccer team has been dominating, soccer is still a game where anything can happen. The women’s team suffered their most recently loss on July 27 to Australia ending a four game win streak. The USWNT also were knocked out in 2016 at the Rio Olympics by Sweden.

After seeing how the men’s team stacks up against the women’s team, you’ve got to start to wonder where the misconnection in performance is. Both teams have players that are well known for their skill such as Carli Lloyd for the USWNT or Christian Pulisic for the men’s team so what else is missing?

One thing a majority of our national team players play here in the US in the Major League Soccer or the MLS. Compared to European leagues, the MLS isn’t as competitive and the talent required to perform isn’t on the same level.

Another issue is team chemistry. The men’s team could be having trouble helping the few players who play in European leagues adjust back to an MLS style of play that could be unfamiliar and awkward to them. This on top of frustration from a game or from seeing teammates not performing as well as they should could begin to mess with team chemistry.

Finally, opponent diversity is taking a toll on the men’s team and not the women’s team. When comparing the results of both the men’s and women’s soccer team results, there isn’t a lot of diversity for the men’s team. The women’s team on the other hand is playing countries from all over the world both in international friendlies and in tournaments. The USMNT plays teams that are not located on our side of the world occasionally.

Whatever the factors are, the issue is clear that the USWNT is dominating internationally and not getting enough coverage for it. Compared to the men’s team, it’s clear to see that they’re outperforming and they should be getting the attention they deserve.