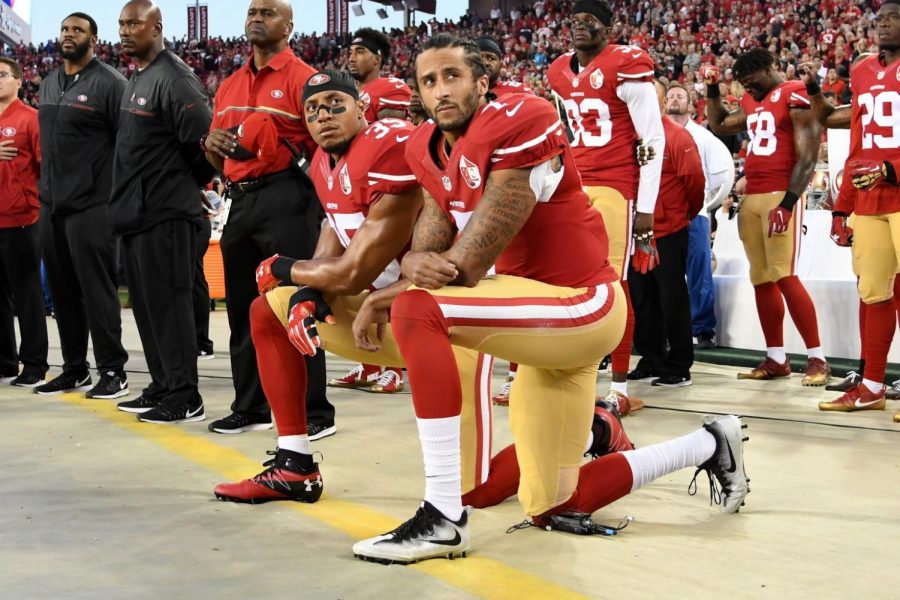 Those in opposition are unhappy with players kneeling during the national anthem at sporting events. This all began over a year ago when Colin Kaepernick, then a quarterback for the San Francisco 49ers, chose to kneel during the national anthem. Kaepernick chose to kneel in protest against police brutality and social injustice, his impetus was not the President of the United States (POTUS) and his insensitivity toward people of color due to the fact that when Kaepernick chose to kneel Obama was the president, not Trump.

Rather than determining the reason why Kaepernick chose to kneel, the media chose to classify his action as disrespectful towards the nation and those who have fought for it which was not at all his intent.

In response to the media’s criticism, Kaepernick said, “Once again, I am not anti-American. I love America. I love people. That is why I’m doing this. I want to help make America better. I think these conversations help everybody have a better understanding of where everybody is coming from.”

For now, the protest has lost its purpose and has become politicized because athletes are kneeling for attention rather than purpose. It is very clear that a bigot is ruining this nation. However that is not the purpose of kneeling nor was Kaepernick’s kneeling done in a disrespectful manner. His purpose was to bring attention to a national epidemic — inequality concerning people of color.

Those in opposition and in favor of Trump made it very clear that national pride is more important than inequality unless, of course, the inequality is directed towards white people. Police brutality was at an all-time high when Kaepernick chose to kneel and instead of focusing attention to that particular issue, Kaepernick’s intent was misconstrued, and as a result, became unemployed. It is important for anyone with a following as big as Kaepernick’s to utilize their platform to speak out against injustice but losing money seems to be more important.

Kneeling has become and remains politicized and will not make a difference unless the original intent is restored and those inflicting oppression among people of color are held to account.