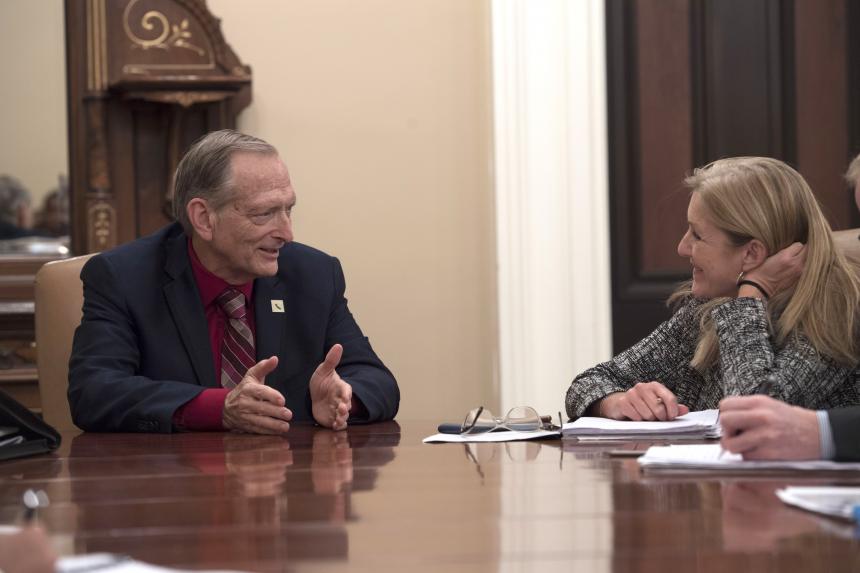 Each journey to become a California state assembly member is unique. This was the case for Castro Valley, Hayward, Union City and North Fremont State Assembly representative William “Bill” Quirk on Oct. 16.

“I didn’t just change from science into politics. Politics is a part of life,” Quirk said. “No matter what you’re in, you’re doing politics.”
Growing up in New Jersey, Quirk started his work in politics while at Columbia University with John Lindsay’s successful New York mayoral campaign in 1966. Although Quirk jokingly said Lindsay, in retrospect, wasn’t such a great mayor, it gave him some foundation for when he would later work on George McGovern’s presidential campaign, while attending the California Institute of Technology.

Quirk took a position as a recruiter for Hayward precinct workers in state and nationwide campaigns beginning in 1988. He recruited workers for senatorial, gubernatorial as well as presidential campaigns, while simultaneously helping Hayward residents get elected to school boards and city council.

In 2004, a Hayward City Council seat opened up and Quirk began his career as a politician.

“I have been active politically,” Quirk expressed. “Frankly, some of the people that I helped win school board races and city council races didn’t know as much as I did.”

With campaigning experience and confidence in his own ability to lead the city, he won the city council seat. He held the position until 2012, when he ran for the open seat of California’s 20th district, an area that covers Castro Valley, Hayward, Union City and North Fremont. After winning the three consecutive campaigns for the seat, Quirk now has a strong voter base.

With his professional background in the fields of science and physics, Quirk is currently the chairman of the Environmental Safety and Toxic Materials Committee. As chairman, he feels right at home promoting water safety and cleanliness, and has looked into ways to recycle water in a safe and responsible manner.

“It is the backbone of the economy for the East Bay,” Quirk said. “Half the political figures of the East Bay are graduates of CSU [East Bay]. I certainly appreciate students getting involved in politics. If you have a favorite [candidate] and you believe in that person go out there and work for them.”

Although Quirk is not currently looking for campaign volunteers, he is constantly working on improving the water quality of the state as well as in the Hayward area.