A Lesson in Cured Italian Meats

You’ve seen them in delis, on sandwiches, and paired with a varieity of cheeses. Salami, prosciutto, and pancetta may all look similar, but they each have their own unique flavor profiles and can be used in several different applications.

“Curing” is a preservation process used on meat and fish. Meats can be covered in a salt mixture and hung to dry over a period of time, or smoked. Curing techniques in America date back hundreds of years to when Native Americans hung buffalo meat high above their fires for weeks, enabling the smoke to draw out the moisture and thusly preserving the meat.

Modern day meat curing calls for a spice mixture that must contain salt and many times, sugar. The nitrates in salt help draw out any water and excess moisture from the meat, and slowly kill the growth of bacteria and microorganisms that can cause meats to spoil. The sugar counteracts the harsh salt flavor but does not do much chemically for the curing process. After the meat is covered in a salt mixture, it is hung in a warm, dry environment from anywhere for a few days to a few months.

Although curing meats is said to have originated in Greece, Italian cured meats are among the most used cured meats today. How can we distinguish these meats other than by their names? Although the majority of them are pork products, the manufacturing processes and ways to use all vary greatly. 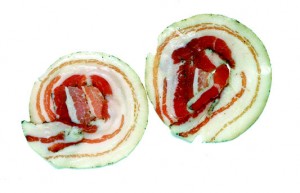 Italy’s version of bacon, Pancetta is not smoked like traditional bacon and usually does not contain sugar. It is air cured, and contains salt, black pepper and other spices like fennel and dried peppers. Pancetta is made from the belly of the pig, and like American bacon, not stingy in the fat department. Unlike prosciutto, pancetta takes about three months of air curing before it is ready to cut. Also, unlike salami and prosciutto, pancetta needs to be cooked before consumed. Pancetta is a great alternative bacon, like for breakfast, in a salad, or even in soups. 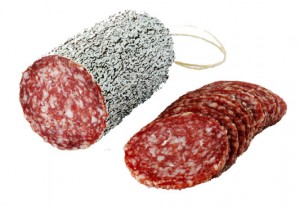 Perhaps the most popularly used cured meat in the U.S. today, salami is usually made from pork, and minimally contains salt, black pepper and garlic (although usually many more spices are included.) Salami is air-dried during its curing process. Salami meat and spice combinations vary from region to region in Italy, and sometimes, it is even made from goose meat. However, in the U.S., salami is made from pork and is extremely high in fat. Salami’s smaller version, salamino, is dried with red peppers and gives it an orange/red color. We know salamino to be called pepperoni. Salami is often served on an antipasto (appetizer) platter on its own, but the French like to pair it with slices of cucumber and black pepper. And it almost goes without saying, that salami is the perfect deli meat for a hearty sandwich. 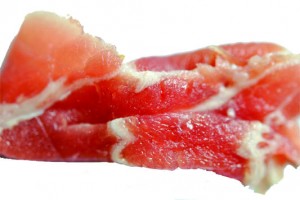 Prosciutto, another pork product, is essentially very fancy ham. Prosciutto can take up to two years to make. Prosciutto, like salami, is air cured, but the process is extremely lengthy and tedious. First, the ham (oftentimes the hind leg of the pig) is salt cured anywhere from a couple weeks to two months, where residual moisture and blood is gradually drawn out of the pork. Then, the pork is hung to dry in a dark, well ventilated area for up to two years. Prosciutto is mostly a light-red meat with brilliantly white, marbled fat going through it. Prosciutto has a softer flavor than salami, but you taste more of the meat, less of the spices. Since on average, prosciutto costs about $15 a pound, it’s always sliced paper thin and is best enjoyed by itself or wrapped around a piece of melon.

Whether you’re having a sand- wich, snack, or a hearty break- fast, there is surely an Italian cured meat that will enhance the experience.