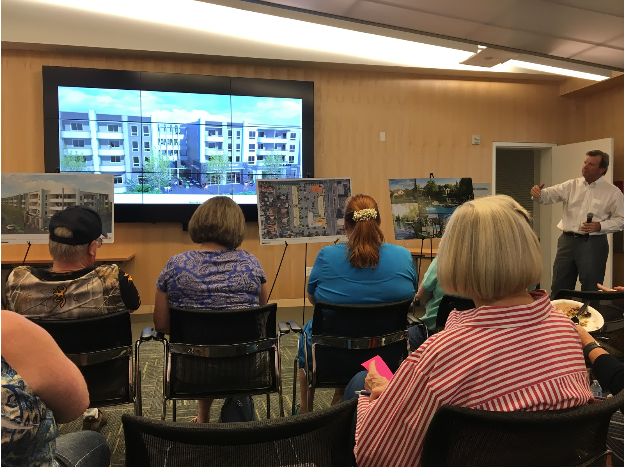 On the 16000 block of Via Arriba across from the old San Lorenzo Theatre and Wells Fargo bank, next to the recently closed down, lottery-winning Kavanagh Liquors, sits a cluster of vacant lots. There has been a recent proposal to build high-end apartments there.

The proposal comes from The Demmon Partners, the half-century old, family-owned and operated real estate investment and development firm located in Redwood City. Their proposal has been met with backlash from San Lorenzo locals.

On Aug. 2, The Demmon Partners held a meeting at the San Lorenzo Library community room to introduce their proposal for these apartments, dubbed the Village Green Apartments, which will be built on the old Mervyn’s lot. Locals were invited to share their thoughts and opinions; concerns included increased traffic and keeping change out of San Lorenzo.

The presenters were consistently interrupted with comments like, “We don’t need more apartments in San Lorenzo!” and “We never agreed on this!” was shouted from the back end of the room.

“San Lorenzo was a community of single family homes,” said long-time San Lorenzo resident Scott Smith. “It always has been and we want to keep it that way. We don’t need apartments where people are going to be moving in and out of San Lorenzo.”

A central concern of nay-sayers was the traffic generated by the apartments. “I don’t get why we’re building more homes,” San Lorenzo native Stefan Brown told the Pioneer. “We don’t have the infrastructure to support them…They will only add an additional 15 minutes to the 15-20 minute drive it takes to get across Washington, Grant, or Bockman.”

In the midst of massive opposition, there were some attendees who supported the plans. “I think it is time that we build something nice in San Lorenzo,” said Jesse Garcia, a former San Lorenzo resident. “Maybe these apartments will encourage the Bohannons to sell their empty lots and maybe this will generate some more money for the community”.