Paradise in a dark alley 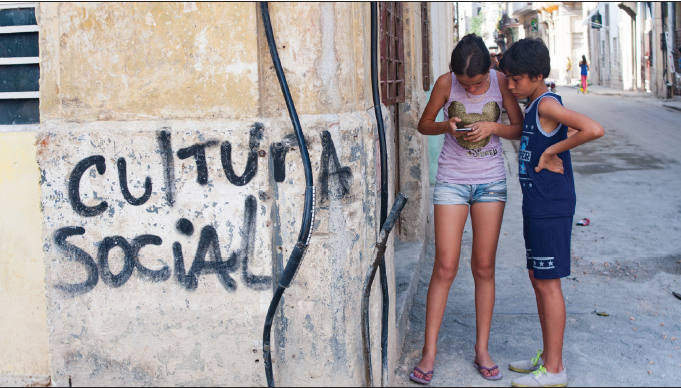 Old Havana is beautiful during the night; it’s like a never ending fiesta. Parents are out with their children, young couples are taking a stroll while street musicians work their magic, and others are huddled together in the wifi hotspot in front of the public library.

As a foreigner, the restaurant workers will go to you, there isn’t much searching that needs to be done on your behalf. However, you do want to consider the prices because if you do the right amount of searching you’ll be able to find a good deal.

This young man noticed that my classmates and I were looking for a “cheap” restaurant so he approached us and offered his help, free of charge. Despite working for another establishment he led us to a location where we would only pay 5 CUCs for a full meal and 1 or 2 CUCs for drinks as opposed to the 12 CUCs per meal sold at his job.

We were skeptical at first because he led us toward a dark alley but the phrase “never judge a book by its cover” couldn’t have been more perfect for that moment. We arrived to a student hostel, or as it’s called in Cuba, Casa de Estudiantes.

The walls were covered in writing but it was for a reason. Our lovely host told us that after dinner, guests, students or not, were welcomed to leave a message on the walls. That alone stood out to me because most restaurants in the states prevent customers from writing on their walls, yet this particular place wanted their guests to leave their mark.

While some of the messages were just guests’ names, a lot of previous guests took the opportunity to praise the food on the wall.

Since it was late at night, only chicken and pork were available, each with a serving of arroz Moros, which is rice and beans mixed together, potato and cucumber slices. Hostal Loretta made me feel like I was at home, from the flavors in the food to the plates we were served in;  it was authentic Cuban food. The service matched the meal quality; there was only one waiter and he made sure we had everything we needed.

As we were finishing our flavorful dinner another guest walked in and we casually talked about how delicious the food was. The people in charge of the restaurant gave us plenty of time to socialize before giving us the check which is something that is very common here in Cuba. People on the island actually enjoy their food as opposed to the United States where there is a sense of urgency to eat and leave.

After being in Cuba for several days we were just begging for a meal that felt homemade. Who would have thought that a small building in a dark alley would be the place to find the long sought meal.