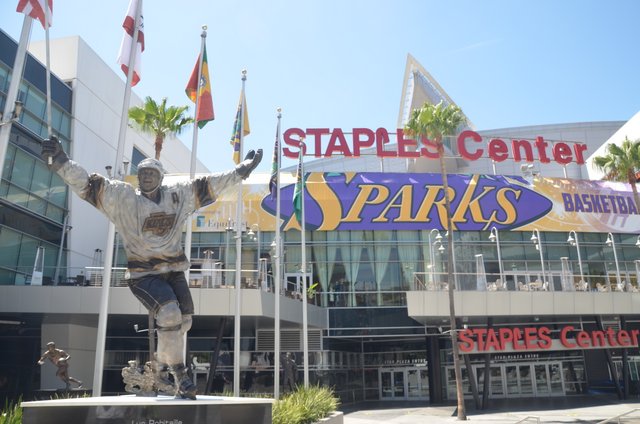 I’m in the middle of work, and I get a phone call. Usually, I don’t answer calls from numbers I don’t know, but this was different.

It was an area code from my hometown Los Angeles, so I was under the impression a family member was giving me a call, so I answered. The caller on the other end said, “Hello, this is Debra Moton calling from the Los Angeles Sparks.”

My heart dropped. Was this the WNBA team Los Angeles Sparks? The team that just won the Women’s National Basketball Association championship last year? The team that plays at the Staples Center in my hometown?

Moton called to tell me I received an internship for game operations, promotions, and entertainment relations for the organization for the summer, which is also when the WNBA season takes place.

I almost cried tears of joy.

I was one step closer to my dream career, being a sports broadcaster. I was going to be working in the legendary Staples Center, which was the home venue for the Los Angeles Lakers and Los Angeles Clippers.

Prior to this call, I received rejections from nearly 60 other internships I applied for, I was told primarily because of my age, lack of experience or because I am only going into my junior year of college.

I never let that put me down. I kept applying, making phone calls and sending out my resume and articles I wrote. I knew someone would give me an opportunity; I knew what I was capable of regardless of what other people thought.

That confidence in myself opened the door for this opportunity. It is not often you get to work with a professional team at the age of 20, but when you believe in yourself, opportunity will present itself.

This position means the absolute world to me. I will be surrounded by professional players and work alongside other professionals in positions I envision myself being. Working in a legendary arena notably adds to my resume and also helps me pursue my ultimate career goal.

I will be required to attend every Sparks home game in the Staples Center as well as other duties, which include executing in-game programs and assisting in the implementation of game day plans. I will develop live game coordination skills for the sponsorship department on game-day projects including all on-court and halftime promotions, and more.

All of these duties will ultimately help me advance my pursuit in the sports broadcasting industry at a high level, as well as be introduced to promotions and marketing duties.

Perhaps the most prominent bonus of this entire opportunity is the fact that the internship is located in my favorite place in the entire world, which is also my hometown; Los Angeles.

It does not really get much better than that.

When you work hard, believe, and apply yourself there are no limits to what can happen for you.