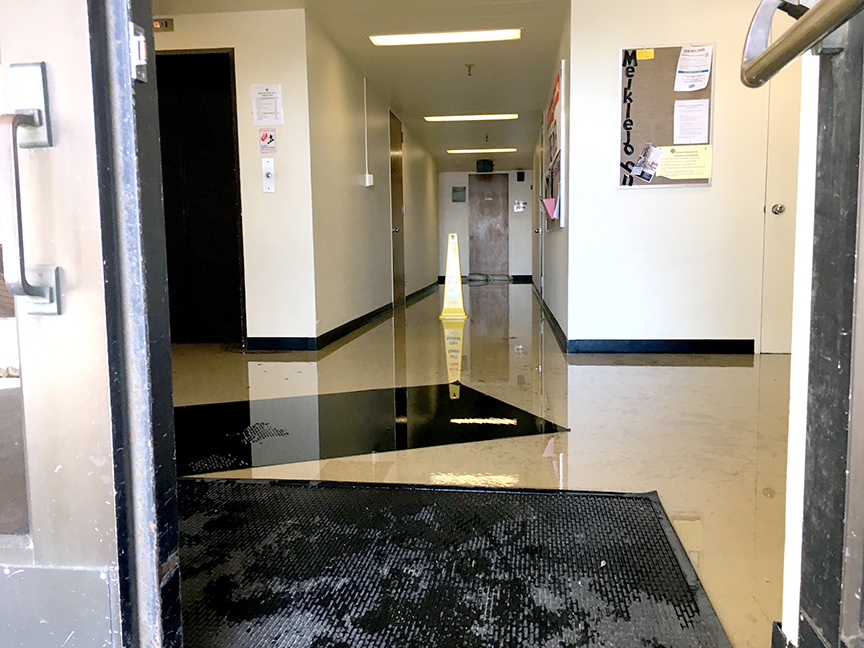 The first floor of Meiklejohn Hall at Cal State East Bay’s Hayward campus was closed on Monday and Tuesday due to a sewage backup, numerous university officials confirmed Monday.

The bottom floor of the building reopened yesterday at 9:30 a.m. according to campus officials. East Bay’s Interim Associate Vice President of University Communications and Public Information Officer Jesse Cantley told the Pioneer that Facilities Management believes the flooding was caused by inappropriately flushed items. The true cause was not confirmed at the time of publication.

According to Cantley, the stoppage happened outside the building in the main sewer line, not in Meiklejohn Hall. “Things do happen in buildings,” he said. “We’re fortunate to have caught it early.”

On Monday, the University Police Department directed traffic on West Loop Road around a sewage hole in front of the building. Maintenance staff, donning rubber shoe covers and gloves to pump water and sewage out of the building, told the Pioneer on Monday at 3:30 p.m. that they had arrived approximately three hours prior and were working in a team of six.

Cantley confirmed that there were 600 gallons of water in the elevator pit, which prompted its closure. The water was drained on Tuesday and the elevator reopened at 9:30 a.m. yesterday.

At the time of publication, there was no assessed damage to the building itself, but several objects including cardboard boxes that contained various items, were discarded, said Cantley.

Donna Placzek-Savage, Director of Environmental Health & Safety at East Bay confirmed that the water was drained and the building was sanitized.

Belfor, a disaster recovery and property restoration company that East Bay is contracted with for emergency services, assisted in the sanitization process, Placzek-Savage told the Pioneer.

“When you have an emergency situation, what you need are more resources to help manage [it],” said Placzek-Savage. “Our [staff] could do it but again, when it goes beyond a normal situation you need extra help.”

Placzek-Savage said that after the spill is cleaned, she will conduct an investigation, which includes looking at the date and time the incident occurred, what caused the spill, how much was spilled, and any corrective actions that need to be taken. Placzek-Savage confirmed that the leakage did not infiltrate any storm drains.

Cantley said there are two major concerns regarding a sewage spill: sanitizing the areas that come in contact with raw sewage and the moisture content left behind.

Certain materials such as drywall naturally have high moisture content, so an incident like this could require it to be ripped out, explained Cantley. The goal of the response team was to dry the moisture as quickly as possible in order to minimize the damage.

At the time of publication, the blocked sewer pipe had been cleared, according to Cantley, who said it’s not likely that an incident like this will happen again soon.