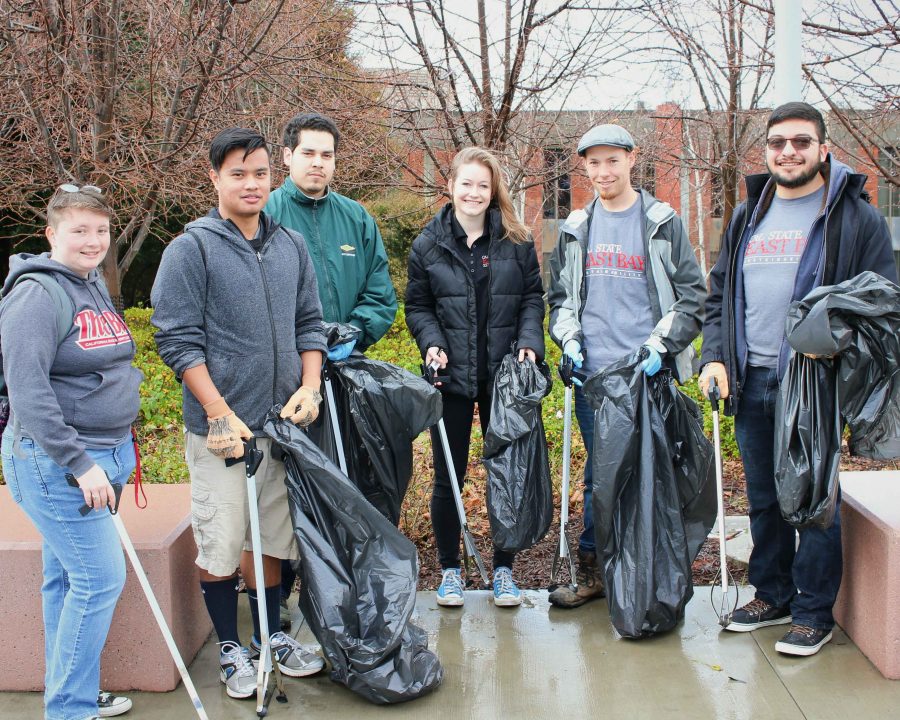 On the stormy morning of Jan. 20, seven students met at Cal State East Bay’s Meiklejohn Hall armed with garbage bags, metal claws and gloves to rid the campus of litter. Despite the rain and small turnout, in less than two hours, the crew cleaned up 30 pounds of trash.

The clean-up was the first event organized by the Sustain East Bay Club, which was created by 15 sustainability ambassadors, students who work in the campus’s Office of Sustainability, last November. Ambassadors are paid interns who work under the CSUEB Director of Sustainability Jillian Buckholz to each create and implement a sustainability project on campus, according to Buckholz. The office hires up to 10 positions annually.

The club gives students a way to be involved in sustainability efforts on campus, according to Jericho Apo, the club’s social media strategist. “We wanted to show other students that there are like-minded students out there who are taking action in leaving a positive impact on the Earth and that they can too,” he said.

Apo said when the ambassadors tabled on campus; they encountered students showed interest in current initiatives, such as the gooseneck water fountains that refill water bottles around campus. They decided to form the club as a way to get students involved in sustainability efforts, according to Apo.

The club didn’t become active until December 2016. Apo said the club meets every Friday at 2 p.m. in the Student Administration building on the Hayward campus and is led by President John Zamora, a fourth-year Computer Science major.

“We want more students to join and get involved in sustainable ways,” said Apo. “If everyone composted, if people didn’t waste water, it would be a different world I think.”

The club has held seven meetings so far, which typically last about an hour and focus on recruiting members, brainstorming ways to ramp up student involvement, discussing what changes students want to see on campus and teaching student’s sustainable practices, such as how to properly dispose of batteries. Not many people know they can’t be thrown in the trash can, according to Apo.

“Sustainability isn’t just about recycling,” said Apo. “It’s about food and electricity and anything in terms of not leaving a large carbon footprint.”

The club is a sister to the Office of Sustainability, which is working on various projects that range from saving water to trash reduction, according to Apo. On Monday, garbage cans across campus will be replaced by bins that separate compost, recycling and landfill in an effort to transition the campus to a triple-stream waste system, a project led by Cerys Evans, ambassador and leader of the office’s Zero Waste Project.

The new bins will be both indoors and outdoors around campus, according to Evans. Compost sections will be placed mainly around food areas and the cement receptacles in the parking lots will be rearranged so the lids are color-coded according to stream: green for compost, blue for recycling and black for landfill.

Buckholz said the conversation started in the Facilities Development and Operations department in October 2014, after AB 1826, a bill that went into effect last April, required businesses to generate a certain amount of organic waste per week. However, the decision to implement the new system wasn’t made until after a waste audit in fall 2015.

According to Buckholz, the general campus currently uses a single stream waste management system, which means that compost, recyclables and trash are all put into one container. From there, waste is picked up by Waste Management and taken to the Davis Street Transfer Station, where it is sorted into compost, recycling and landfill streams.

With the triple stream system, Waste Management will no longer need to sort off-site, said Buckholz. Each waste stream will be delivered directly to the corresponding site at the Davis Street Transfer Station.

The RAW Center, Student and Faculty Support building and Pioneer Heights are already using the triple-stream system, according to Buckholz.

The waste system is managed by the Facilities Development and Operations department, which is currently involved in a Request for Proposals process “to improve how waste is hauled from campus, the way data is received from the waste hauler, and potentially find a new waste hauler,” according to Buckholz.

Evans said the goal is not to “save waste,” but rather to divert it out of the landfill stream and into the compost and recycling system.

Friday’s clean-up produced a lower turn-out than expected because the club didn’t have time to properly advertise, except through posters and social media, said Apo. The event was organized at the last minute and the club didn’t have funding from ASI at that time, although they are expecting to receive it. Apo said the heavy rain was also a deterrent.

According to Zamora, the club has received less than $100 in funding from ASI, which has mostly been spent on materials and food.

Zamora said in order to receive ASI funding for an event, the club has to apply three weeks ahead of time. So far ASI hasn’t been able to approve the funding prior to the club’s events, so they’ve been funded out of pocket. The club is hoping to get reimbursed.

The Facilities Development and Operations department at East Bay provided the metal claws and gloves, while the garbage bags and pizza lunch were provided by club members, who paid for them out of pocket, according to Apo. The club will receive funding from ASI. The amount and how the money will be used has still been undetermined at the time of publication, according to Apo.

The club didn’t have a specific goal for how much trash they wanted to collect at the clean-up, instead they wanted to use the event as an opportunity to generate student interest, said Apo.

Apo said he has always been interested in sustainability efforts, but wasn’t motivated to actively get involved in a club or organization throughout high school or junior college until he transferred to East Bay, when he applied for a paid internship as a sustainability ambassador. Apo coordinates social media for the club, which so far has a following of 200 on Facebook and nearly 300 in Instagram.

“We’re all students that just work together and we share the same cause; leaving the earth better than how we found it,” said Apo.