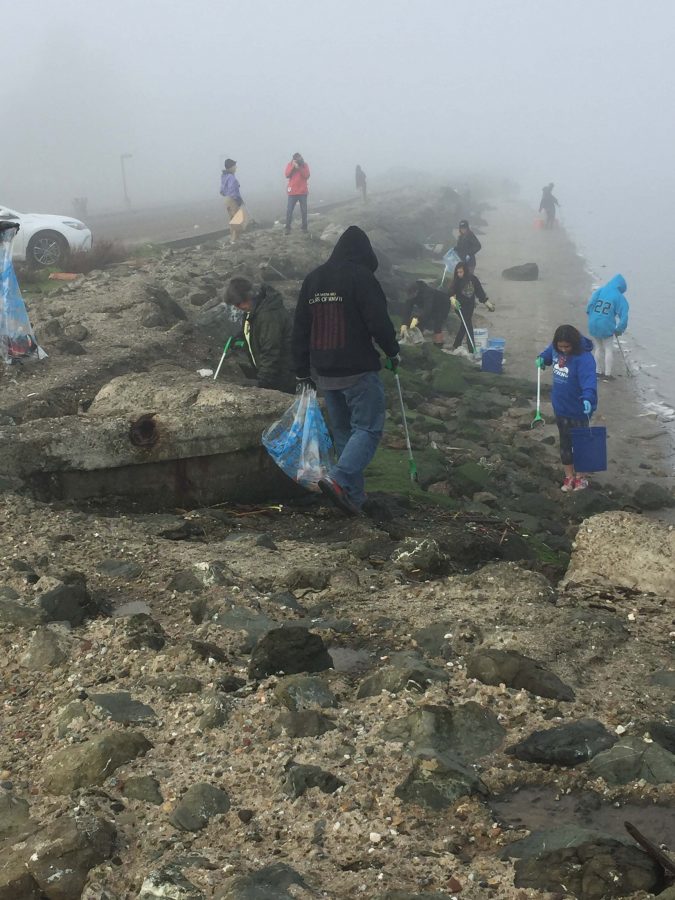 The city of Alameda is an island known for its breathtaking views of the Bay Area. But being surrounded by water isn’t always as relaxing as it may seem.

With the massive storm that blew through the Bay Area last Wednesday, continuing well into Friday causing high tides, debris was blown onto the town’s most beloved waterfronts. From the east end of the Alameda Beach to the west side of Crab Cove, trash could be seen stuck in sand, spread onto grass and floating in the water.

This was perfect timing for Alameda Public Works and Alameda Point Partners, who hosted the second annual Martin Luther King Jr. Day of Service shoreline clean up. The event started in 2015 and has brought out 250 volunteers for cleanup efforts, event officials said.

Volunteer events are hosted nationwide on Martin Luther King Jr. Day, many in parks and nature areas. Each year East Bay Regional Park District staff and volunteers pick up litter and recyclables from shoreline parks, lakes and along creeks in Alameda and Contra Costa Counties.

Pollution and litter are major problems in the Bay Area, according to the group Save The Bay, the largest regional organization with more than 50,000 supporters, advocates and volunteers who work to protect the Bay from pollution and reckless shoreline development. There’s an average of three pieces of trash along every foot of Bay Area streams that lead to the ocean, and 90 percent of trash in Bay Area waterways does not biodegrade, according to the group.

The Day of Service shoreline clean up asks residents to carry on Dr. Martin Luther King Jr.’s ideals of providing for community by cleaning up the Oakland-Alameda estuary shoreline. According to a 2014 President Barack Obama speech, he felt it was important to transform MLK’s teachings and life into community action that can help solve social problems, something King fought against until his death.

More than 70 volunteers showed up on a cloudy, foggy Saturday at 9 a.m. at the Main Street parking lot west of the ferry terminal in Alameda, including members of the Boy Scouts of America and San Francisco Baykeeper, a 25-year-old nonprofit advocacy group that works to prevent pollution in the San Francisco Bay and has helped to defeat two proposals to expand oil refining and crude oil transport in the Bay Area.

Alameda Point Partners and Event coordinator Rachel Campos de Ivanov welcomed volunteers by going over a few guidelines. With the help of Waste Management, volunteers were informed about the importance of their safety during this event.

“While we want everything to be picked up, avoid needles and be extremely cautious when handling glass,” Campos said. “Gloves must be worn at all times, we do not want anyone exposed to anything hazardous.”

She thanked everyone for coming out and told her personal reason for putting on this event. “Keeping litter out of the waterways is so important. I know I want Alameda to be a place where the water stays clean for everyone. I’m so thankful that you guys came out to help.”

Volunteers grabbed their trash pickers and buckets and began their journey up and down the rocky shoreline to clear as much garbage as possible.

“It’s my home, I’ve lived here all my life,” said retired teacher Phil Gravem. “You drive by and you see this litter and you want to stop and pick it up anyways. But now I’m doing it with my daughter, fellow neighbors, former students so it really makes a difference.”

As the morning passed, clouds cleared and the area’s rubbish quickly disappeared. Some volunteers took it a step further by getting into the water to stop any waste from making its way onto land. By noon, everyone dumped the last of their buckets into the dumpsters.