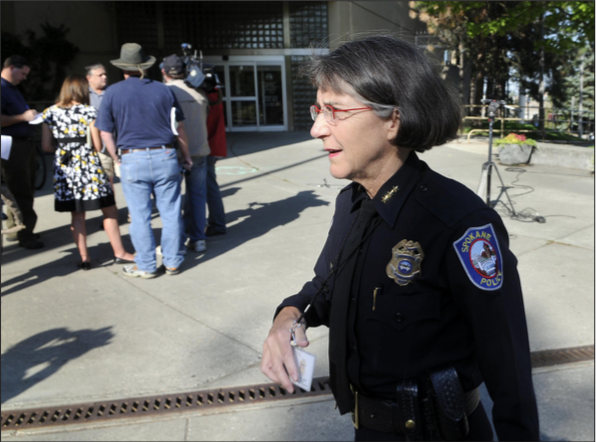 Photo Courtesy of City of Spokane

The Oakland Police Department has a new leader, finally.

A seven-month-long search came to an end on Jan. 5, when Oakland Mayor Libby Schaaf announced at a press conference that former Spokane, Washington Police Chief Ann Kirkpatrick would assume the same role in Oakland. Kirkpatrick will be the first female police chief in city history.

On Feb. 27, she will officially take over a department that was rocked by a sexual misconduct scandal in 2015 that centered around a minor working as a prostitute, Jasmine Abuslin known by the alias Celeste Guap, who is now 19.

Former OPD Chief Sean Whent resigned on June 9, just a few days after the scandals became public. Ben Fairow was named interim police chief after Whent’s resignation but served just a few days on the job before Schaaf replaced him on June 15. According to the Associated Press there was, “unspecified information that led [Schaaf] to lose confidence in [Fairow’s] ability to lead the beleaguered department.”

According to Abuslin, she had sexual encounters with more than 20 police officers, several of which occurred while she was a minor. In return she received information about upcoming and potential prostitution sting circumstances and locations in several instances.

Guap said that when she was 17 years old, she became romantically involved with an Oakland cop who saved her from her abusive pimp. Guap claims that officer introduced her to other cops who eventually became customers for her prostitution services.

Kirkpatrick has an impressive 34-years of experience that includes stints in three different cities in Washington, her hometown Memphis, Tennessee and some reform work in Chicago. She applied for the vacant Chicago Police Department and was named one of three finalists but was passed over for the position.

Kirkpatrick will have her hands full with a department that has been monitored by a team of federal overseers for the last 13 years, thanks in large part to the actions of a group of rogue officers referred to as “The Riders.” The Riders were a group of Oakland police officers who were convicted of several charges that included harassment, racial profiling, assault and planting evidence, according to OPD.

Specifics surrounding her contract were still unclear, however, she is expected to make $270,000 annually. Kirkpatrick is not married, has no children and said she plans to live in Oakland.

“I gotta save up some money,” she said during her press conference on Jan. 5. “Y’all are expensive.”