Silver and black are black and blue 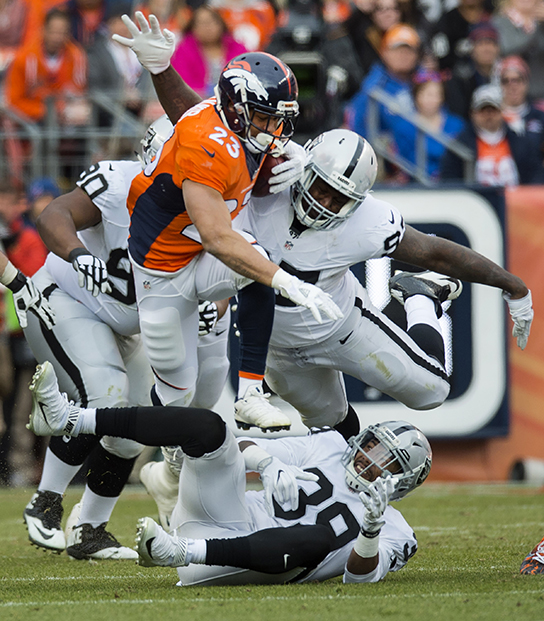 When Oakland Raiders starting quarterback Derek Carr went down two weeks ago with a broken leg against the Indianapolis Colts, things seemed bad.

Carr was not only the best offensive player on the team, but in his third year in the league, he was finally becoming a superstar. He was even an MVP candidate before dislocating his finger in week 14, and then breaking his leg just two weeks later.

A wave of optimism swept over the Bay Area however, because Oakland has a veteran backup quarterback in Penn State alum Matt McGloin. The fourth year gunslinger gave Raider fans like myself hope: he’s been on the team four years and he knows the offense.

McGloin was expected to get a week or two of preparation before the playoffs in the final game of the regular season on Sunday, but his season abruptly ended the worst way possible. A Denver Broncos defender drove McGloin into the ground at the end of the second quarter, causing a shoulder injury that prevented him from coming back into the game.

Cook finished the blowout 24-6 loss against the Broncos in the first regular-season action of his career and went 14 for 21 with 150 yards, a touchdown and an interception.

According to NFL Network’s Ian Rapoport, McGloin injured his trapezius in his shoulder, which is “acting like a pinched nerve.” Rapoport also confirmed the Raiders are planning to start Cook next week in their opening round playoff game on the road against the Houston Texans, since they do not expect McGloin to be ready to play.

The loss of Carr and McGloin is bad, but the loss in Sunday’s game was even worse for Oakland. If Oakland had beaten Denver, they would have locked up their first AFC West Division championship since 2002. Instead, that championship went to the rival Kansas City Chiefs, who do not have to play in the wild card round and will host their first home game, precisely the situation the Raiders could have locked up with a win over Denver on Sunday.

At 12-4, their best record since 2003, Oakland’s offense needs to figure out a way to help the defense, which has been solid, despite the injuries at the quarterback position. With a leader like Khalil Mack, the third year defensive end and potential NFL Defensive Player of the Year, Oakland can go on the road and beat Houston.

The Texans are in one of the worst divisions in the league, the AFC South, where a 9-7 record nabbed them an automatic playoff bid. Houston lost their final game of the season to the Tennessee Titans, who played without their starting quarterback, Marcus Mariota, after he suffered a broken leg last week.

The Texans have quarterback issues of their own. After they spent $72 million on former Peyton Manning backup and free agent quarterback Brock Osweiler, he was benched for veteran Tom Savage, due to his poor play and lack of production on the field. In the final game of the season, Savage was hurt and Osweiler was forced to return, but could not lead his team to victory.

With both teams in serious trouble at the quarterback position, offensively the playing field is somewhat evened. Defense and turnovers will play a huge factor in the game.

Hopefully the young Oakland squad can rise to the occasion and shock critics who gave them no chance to succeed in the postseason after Carr went down.