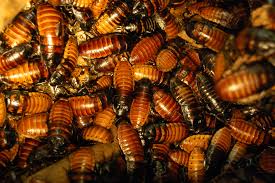 Cockroaches took center stage at a San Lorenzo School District meeting on Oct. 18, in an attempt to address 82 complaints filed by the faculty of Grant Elementary School, regarding an ongoing infestation.

A bag of roach remains taken from the classroom of fourth-grade teacher Julie Wolfe was presented Tuesday evening as a part of her statement to attest the elementary school’s ineffective pesticide spraying. “We are appreciative of the spraying, but we need more,” she told the board in her address.

Wolfe, who spoke on behalf of other faculty members, attested that the infestation of cockroaches initially surfaced in January and had since been on the elementary school’s backlog of complaints. The ceiling cracks and roach droppings in Wolfe’s classroom listed amongst the 82 complaints, which prompted her to address the school board and public.

The infestation, Wolfe said, “is a health risk to all students as a result of lack of proper cleansing,” in her statement indicating that proper preventative pest management practices are not being taken by the district. “I believe there are a number of measures the district could be taking to help us with our problem, which until now the district has failed to do,” said Wolfe.

The pest control company who currently sprays the school, and is employed by the district, advised Wolfe that proper methods should be weather-stripping door stops, mesh covering for drains, repairing of cracks and crevasses and vacuuming up cockroach remains. In a closing statement made by Wolfe, if preventative measures are not taken, she will continue to address the infestation at the next public hearing.

Wolfe presented independent research that stated that direct contact with roach feces is the number one cause of asthma and foodborne illness.  The American Lung Association, who is not associated directly with Grant Elementary school, similarly states on their current web page, “exposure to cockroach allergen can actually cause asthma to develop in preschool-aged children.”

The elementary school has a current population of 427 students.