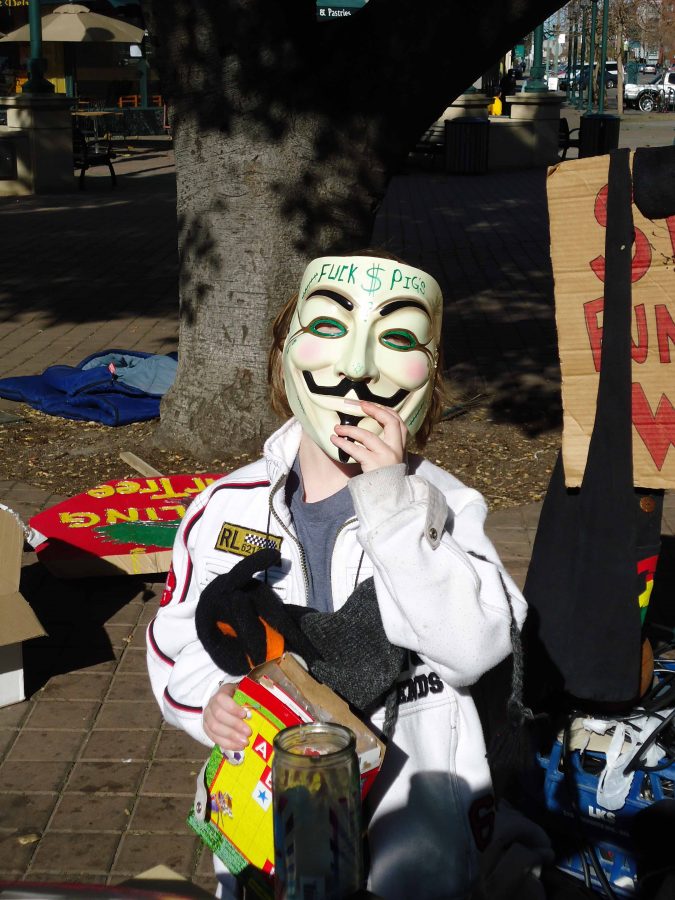 It’s been five years since activists with the Occupy movement made camp at the Frank H. Ogawa Plaza in Oakland to protest social inequality and wealth disparity. Today, the tents are long-gone and supporters say Occupy Oakland no longer exists.

On Saturday evening, around 150 Occupy sympathizers gathered in the plaza at the corner of Broadway and 14th streets to listen to live music, poetry readings and speeches and discuss the achievements of the movement, according to the Occupy Oakland website.

The Occupy movement was born on Wall Street in New York’s financial district on Sept. 17, 2011 when activists protested the federal banking system and called for economic, social justice and democratic reform. The movement has since spread to over 100 cities in the U.S. and 1,500 worldwide, according to Occupy Wall Street. On Oct. 10, 2011 it reached Oakland.

Occupy Oakland made headlines on Nov. 2, 2011, less than a month after it began, when thousands of protesters shut down the port of Oakland and called for a citywide general strike. The call to action followed a clash with law enforcement a week prior, which involved the deployment of tear gas, 100 arrests and one reported life-threatening injury, according to the Associated Press.

Luz Calvo, a professor of ethnic studies at Cal State East Bay who was involved with Occupy Oakland, said the official movement began to fall apart about a month after it began, largely due to a lack of leadership and structure, as well as racial tensions.

“It was very white and I think that the problem was that the white people who were organizing didn’t do so with humility or try to outreach to, listen to and take leadership of Oakland people of color,” said Calvo.

Dr. Samsarah Morgan, founder of the Children’s Village at the encampment, said the occupation of the City Hall lasted about a month, before the mayor evicted the protesters and the encampment was destroyed by law enforcement. Protests turned violent quickly and focused on “Fuck the Police” rallies, losing sight of the message of the movement: nonviolent protests against wealthy special interests, according to Morgan.

Calvo said decisions about the movement were made at General Assemblies, which first took place nightly when the encampment was still standing, and began to taper off as time went on. The leaders of Occupy Oakland identified as anarchists and subscribed to a rejection of leaders with all decisions made by the people. They also opposed collaboration with the government and law enforcement.

Protesters smashed the windows of small businesses and damaged property of average middle class families that had nothing to do with the movement, according to Morgan. Only one or two banks were targeted in the process, the original focus of Occupy, and Morgan said the Oakland movement began to resemble anarchy.

“People didn’t want to come to Occupy Oakland because they were afraid of the people there at the encampments,” said Morgan. “[The organizers of Occupy Oakland] were like, allergic to having a focus and a mission. They had no strategy. It was like a game to them, like little children running around at night with masks on….it turned middle class people against what was happening.”

What exists in the place of Occupy Oakland today are different subgroups that stemmed from the movement like Occupy the Heart, Decolonize Oakland the Oakland Coalition to Stop Goldman Sachs that tackle other issues within the community, according to Calvo. Calvo said the activism continues in Oakland, largely through the connections people made with each other through their involvement with Occupy Oakland.

Morgan, a birth and postpartum doula — a midwife who assists women during and after childbirth — and the founder and director of the Nia Center for Birth and Family Life, said Occupy inspired her to expand her work within the community. She works as a doula and licensed doula trainer at the Oakland Birth Foundation, an organization that educates women about reproductive choices and provides sliding scale funding for traditional midwifery services, with a focus on women of color.

Before she moved to Oakland and became a doula, Morgan was a stockbroker in New York’s financial district. “I like having a good conscience,” she said. “I like being proud of what I’m doing instead of feeding a corporate machine.” She resonated with the movement in New York and wanted to provide a safe space for parents and children to organize in Oakland. “You can’t have a good revolution without women and children,” she said.

Ashel “Seasunz” Eldridge, an ethnic studies professor at San Francisco State University and Occupy Oakland activist, said his experience with the movement inspired him to incorporate discussions about systems of government into his teachings.

“Democracy itself is an experiment,” he said. “[Occupy Oakland] was a deeper microcosm of the democratic process where people had to listen to each other and really look in the face the people that different policies were affecting…and address privilege issues and address sexism and racism and all these things that were really the backbone of the movement,” he said.

Eldridge was moved by the number of homeless families he came in contact with while staying at the Occupy Oakland encampment, which inspired him to establish a service to nourish those in need with free, all-natural juices. This opened the door for his affordable, “solar-powered” juicing business, S.O.S. Juices, which educates people about plant-based diets as cures for illnesses like diabetes, obesity and heart disease and sells affordable juice and refurbished juicers.

Homelessness is a persistent concern in the city of Oakland. The Alameda Countywide Homeless Count and Survey published a study in March that revealed that there were 4,040 sheltered and unsheltered homeless people in Alameda County on Jan. 8, 2015.

“What you saw was the underbelly of the U.S.,” said Eldridge. “When I went out and saw people hungry, living in tents and all that, I was like ‘this is the perfect opportunity to really look at the issue and actually address it.’”

Morgan said the activists often fed the homeless, on-site medics provided care and sometimes tents were even donated for families to live in.

“I think Occupy lives in the consciousness of the people first and foremost,” said Eldridge.