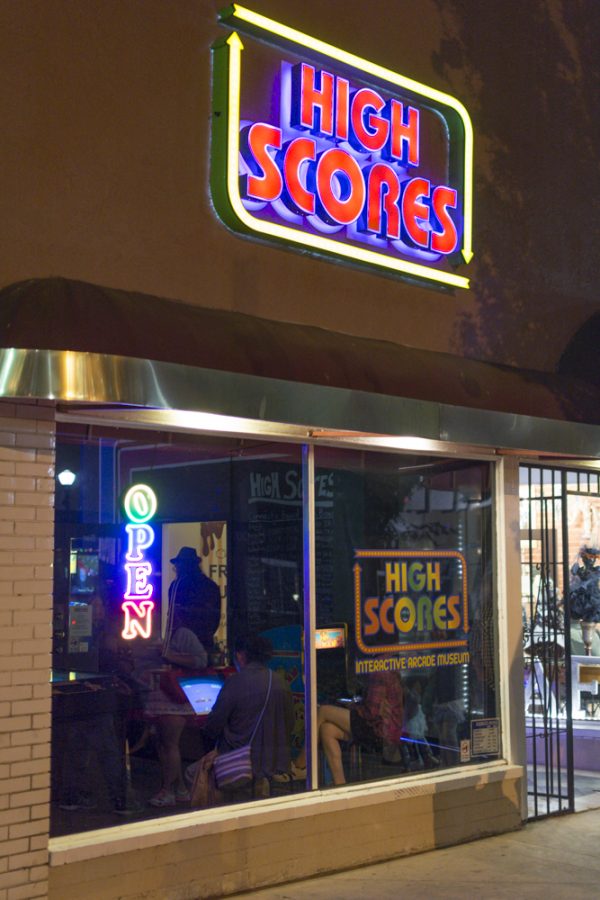 It’s an early Friday night in downtown Hayward and families and college students wander up and down B Street. A beer brewery, frozen yogurt shop and movie theater line the block, but it seems everyone is headed to the High Scores Arcade.

Outside the 1980s-themed interactive arcade museum, the bright neon signs flash “OPEN” in the dimmed window and “Rock Me Tonight” by Billy Squier blares outside the door.

The arcade room is dark, lit by multicolored signs and the screens of about 40 machines featuring classic favorites like Pac Man, Tron, Donkey Kong and Zoo Keeper. For most of us millennials, walking through the doors is like walking into an unfamiliar era, but for others it brings back memories.

Shawn Livernoche and his wife Megan co-own High Scores, which has two locations, one in Alameda and one in Hayward. High Scores originally opened in Burlington, New Jersey in 2010 and relocated to Alameda in 2013 when Megan was offered a job opportunity with Pharma in San Francisco. The whole lot of arcade machines were shipped to California from New Jersey, the expenses paid by Megan’s job.

The arcade opened its second location in Hayward in August. “We’re from a diverse area, and it reminded us of home,” said Megan.

Shawn began collecting arcade machines in 2006 when the couple lived in a one-bedroom apartment in New Jersey. The couple visited auctions in New Jersey and paid anywhere from $200 to $5,000 per machine and restored the ones in poor condition.

The couple hopes that High Scores will create a social community for gamers. Shawn explained that people are losing their social skills and kids missing out on physically playing games together due to the prevlaence of home-based gaming systems.

“A lot of gamers don’t leave their house. They sit on their couch with their headsets, playing together but not together,” said Megan. “I think that a totally different social experience than like having to go head-to-head with somebody…it’s a whole different level of interaction.”

The value of arcade machines are increasing as they become harder to find, according to Shawn. When they first started collecting, Donkey Kong cost $500. Ten years later, the couple paid $1,250 for the exact same machine.

Surrounded by dark walls and blaring music, the atmosphere at High Scores is designed to encourage gamers to turn off their phones and be in the present. “You’ve got the music playing, you got the dark walls – we do that purposely so that you can just kinda escape when you come in and focus on having fun,” said Megan.

The machines require no coins. Instead, the couple asks for a donation as an entrance fee: $5 for an hour of play and $10 donation for day.