Raiders beat Ravens on the road 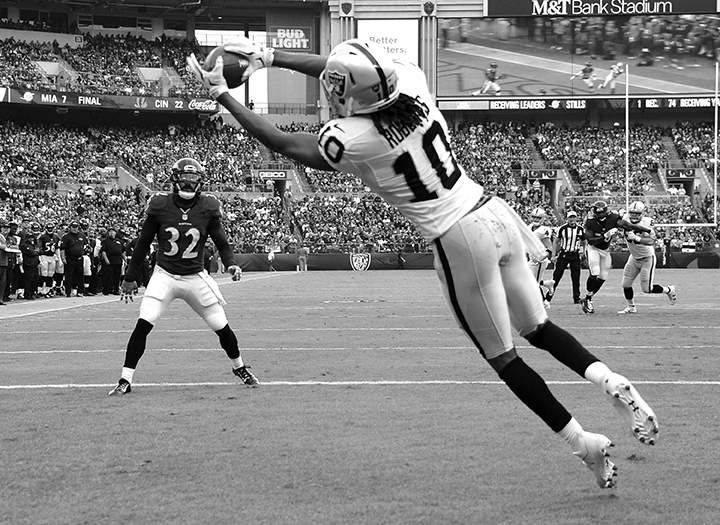 A quarter of the way through the 2016 NFL season finds the Oakland Raiders in unfamiliar territory.

For the first time in more than 15 years the silver and black are a perfect 3-0 on the road and 3-1 overall.

That places them in second place in the AFC West just behind the undefeated defending Super Bowl champion Denver Broncos (4-0).

“We are a road team I guess,” Carr jokingly told reporters following the game. “Road wins are hard to come by and we definitely appreciate the success we have had early on.”

Carr was stellar on the day and finished the game 25-for-35 passing as he accumulated 199 yards and 4 touchdowns. Veteran wide receiver Michael Crabtree and second-year man Amari Cooper caught the bulk of the passes as the two combined for 12 receptions, 138 yards and 3 touchdowns on the day.

However, it was the much-maligned defense of the first few weeks that stepped up for the second straight game.

Oakland previously gave up 70 points in their first two games, however, after allowing just 17 points last week, the defense bounced back with another solid showing on the road.

“The recognition and awareness is clear. These guys are playing for each other and that shows.”

Oakland didn’t have much success on the ground with their newly appointed running back by committee approach that features veteran Latavius Murray and rookies Jalen Richard and DeAndre Washington. The three combined for just 64 yards on 15 carries in the win.

It was Baltimore who had success on the ground and highlighted a primary weakness of the silver and black defense, the run stopping game.

Forsett has been ineffective the first couple weeks and Ravens coach John Harbaugh said he was a “healthy scratch” before the game.

His replacement West finished the game with 21 carries, 113 yards and a touchdown, an area the Raiders will need to figure out before teams take advantage of it.

Oakland rookie linebacker Cory James led the team in tackles with 12 in his second consecutive start after he replaced linebacker Ben Heeney in the starting lineup two weeks ago against the Tennessee Titans. James also assisted on three tackles and forced a fumble.

The Raiders finally return to Oakland on Sunday where they lost their only home game this season to the Atlanta Falcons 35-34 two weeks ago.

Oakland will take on AFC West rival the San Diego Chargers who are coming off a tough 35-34 loss to the New Orleans Saints at home. The Chargers are 1-3 and in last place in the AFC West division.