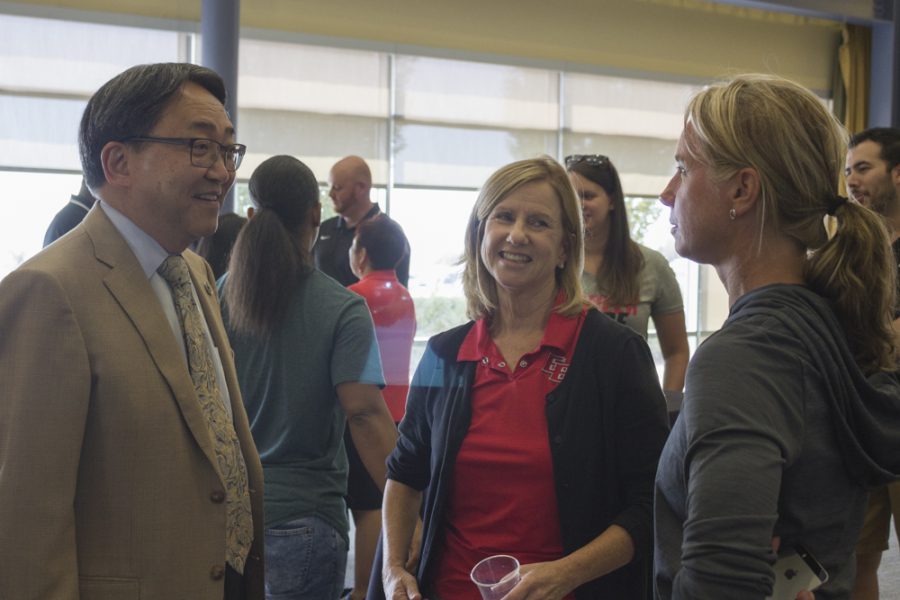 It was a short ride, but it was memorable.

McDermott will take over at USF in a few weeks and East Bay tabbed Dr. Don Sawyer to fill the role for the Pioneers in an interim position. Sawyer was unavailable for comment until Sept. 7.

In her just less than a year and a half at the helm of the athletics department at CSUEB, six head coaches left or stepped down under McDermott, who took over the director of athletics role on April 1, 2015. In addition to Bob Ralston and Darren Lewis leaving the baseball team after the best season in school history, the women’s basketball, track, cross country, softball, men’s soccer and swimming coaches all stepped down or

left to pursue other opportunities. However, Friday was a day to reflect on the job she did since she arrived from Metropolitan State in Denver, Colorado last year. Coaches, staff and even President Leroy Morishita gathered in the University Union for drinks and snacks in a farewell celebration for the short-lived director of athletics. Short stints aren’t a common thing for McDermott, as she held her role at Metro State for more than 17 years, from 1998 to 2015.
CSUEB went through an extensive search to select McDermott for the position, which included a search committee comprised of Associate Vice President of Student Support and Development, Andrea Wilson, Paul Carpenter, the chair in the department of kinesiology, Marissa Parry Clavin, an associate athletics director in Internal Operations, Lisa Cooper, the head coach of the women’s water polo team, Alan Sue, the head coach of the men’s and women’s golf teams and Trey James, a student-athlete on the men’s soccer team.

McDermott was hopeful she could help the East Bay athletics department grow by utilizing a model that was successful for her at Metro State that focused on community and business involvement.

“We have done a lot of community partnerships and even some sponsorship things with organizations like Major League Baseball and the Denver Parks and Recreations Department. It is great for the campus to get the community involved,” McDermott said.

East Bay will have to keep an eye on the Dons up North in order to see if McDermott delivers on her message.