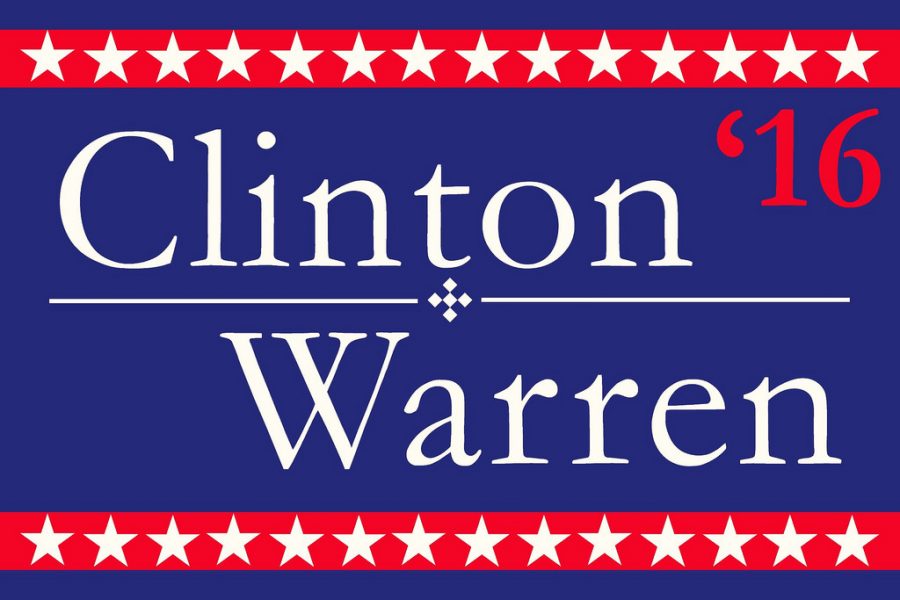 Here we are in 2016, on the cusp of our first female president. Bernie Sanders publicly admitted last month in a C-SPAN interview that he will not receive the Democratic nomination and officially endorsed Hillary Clinton on Tuesday, so Clinton it is.

Had Clinton gone up against a moderate republican like John Kasich, she would have lost. NBC News had Kasich at a 12-point advantage over Clinton before he lost the Republican ballot in April. But Clinton, who survived an email scandal and an FBI investigation, is running against Donald Trump, the most unsavory presidential candidate since David Duke, former KKK Grand Master, who ran in 1988 and 1992.

But who will be Clinton’s running mate? She has until the end of the Democratic Convention to decide. Massachusetts Sen. Elizabeth Warren was Clinton’s guest of honor at a June rally at the Cincinnati Museum Center in Ohio. Clinton and Warren have often butted heads over political differences but found a common enemy in Trump, which forced them to unite. In that moment, it became clear that Warren could and should be Clinton’s running mate.

A woman president is unprecedented. Not one, but two women potentially in the two most powerful positions in the country? Unfathomable.

Progressives will have a voice in the White House if Clinton decides to make Warren her vice president and millennials will have a voice that matches their own. There were more young voters ages 18 to 29, who voted for Sanders over Trump and Clinton combined, according to The Washington Post.

Young voters have been largely against Clinton because they believe that she does not have their best interests in mind. Clinton is often referred to as “Shillary” on social media because she acts as a shill, an accomplice to a swindler who tries to entice others.

Progressives believe that Clinton is in the pocket of big business and Warren will balance that out. Warren will serve as a dissenting voice to Clinton’s moderate views. Many progressive voters may change their opinion of Clinton with Warren in her posse and she will change the minds of hundreds of thousands of voters.

On the Rachel Maddow show on CNN in June, Warren gave Clinton her full support. Warren is the best hope progressive liberals have to be represented nationally. Warren and Sanders share beliefs when it comes to the protection of the environment, transformation from fossil fuels to renewable energy and the reformation of wall street practices.

Warren made it a priority to condemn big businesses and their evasion of taxes. She partnered with former Michigan Sen. Carl Levin to pass the Stop Corporate Inversions Act of 2015, according to Warren’s website. The act would force businesses who store their taxes offshore to either begin paying their fair share or fully move their business to the country where they stash their money.

That was a major move by Warren because it meant that progressives who have previously fallen out of favor of Clinton may have a reason to come back.

Warren is the only logical choice for progressive voters and the only chance for Clinton to repair her image. Warren will provide another perspective that Clinton doesn’t normally offer, which benefits everybody. Clinton was against a $15 minimum wage and free college tuition, yet adopted both of these ideas when it became clear that these views aligned with what most Democrats wanted.

Warren makes Clinton more appealing and is the yin to Clinton’s yang. Warren is the best choice for vice president of the United States.